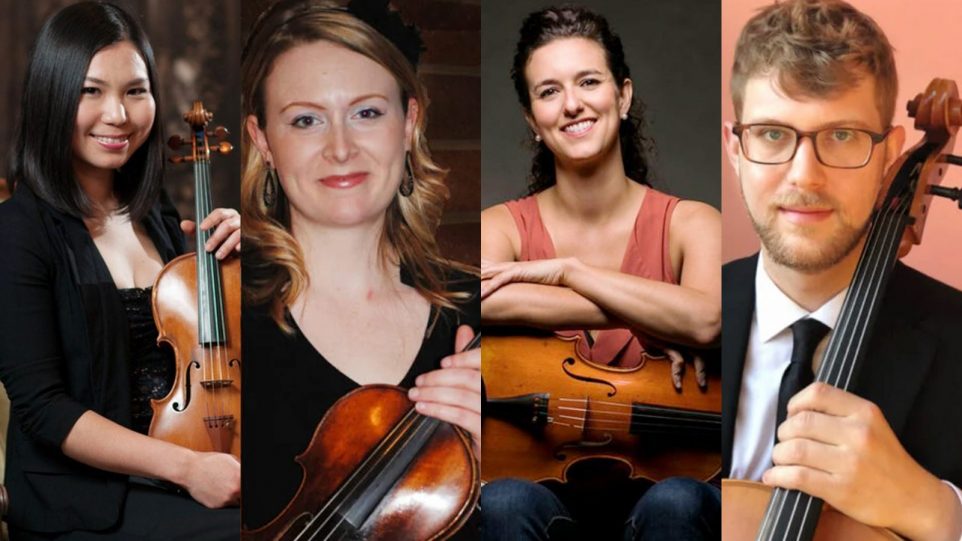 Azusa Tashiro, violin 1 Azusa Tashiro is Concertmaster for Illinois Philharmonic Orchestra (IPO) and is originally from Chiba, Japan. She started playing violin at the age of 4 and continued her studies at the Toho School of Music and DePaul University, where she studied with the renowned violinist Ilya Kaler. She is the former concertmaster of the Civic Orchestra of Chicago and is a guest concertmaster of the Orchestra Iowa. She has also performed with various ensembles such as the Minnesota Orchestra, Milwaukee Symphony Orchestra, Chicago Philharmonic Orchestra, and the Joffrey Ballet. Azusa is enthusiastic about performing non-traditional forms of music; she has been a member of the Peter Jankovic Ensemble (Classical guitar/String Quartet), and has frequently performed with the Corky Siegel’s Chamber Blues and the Fifth House Ensemble.

Elizabeth Huffman, violin 2 Elizabeth Huffman joined IPO as Assistant Concertmaster in 2005. An active freelance musician, Elizabeth has performed with multiple artists and orchestras across the country. In addition to performing with the IPO, she is a member of the Elgin Symphony Orchestra and the Milwaukee Ballet Orchestra. When she is not performing, Elizabeth maintains a studio of approximately 20 violin students. She is the Assistant Director at the Oak Park String Academy, where her students range in age from 5-17 years old. In her work with such young musicians, Elizabeth is passionate about building character and appreciation for music at an early age. She hopes to build a legacy of future musicians and future audience members for both the IPO and all live music.

Amanda Grimm, viola Violinist and violist, Amanda Grimm is Acting Principal Violist with IPO. She enjoys a versatile career as a freelance artist in the greater Chicago area. A graduate of the Oberlin Conservatory and Carnegie Mellon University, she has performed as a soloist, recitalist, and concertmaster in both the United States and abroad. The current Principal Violist of the Elgin Symphony, Ms. Grimm has performed as a violinist and violist with the Milwaukee, Northwest Indiana, and Wheeling Symphonies, as well as Chicago Philharmonic, and Chicago Chamber Orchestras. As an instructor, Ms. Grimm has maintained a private studio for fifteen years. She has been on the faculty at the Merit School of Music, Chicago Opera Theater Education Division, Chicago School of Music, and Lincoln Park Performing Arts High School (PA). Dedicated to music education, she also regularly performs outreach concerts and programs in the Chicago Public Schools and at various schools, colleges, and universities throughout the country.

Jacob Hanegan, cello Jacob Hanegan joined Illinois Philharmonic Orchestra as Principal Cellist in April, 2019. Along with his Chicagoland performances, Jake regularly performs with the Sarasota Orchestra, the Pacific Northwest Ballet, and the Seattle Symphony. He holds a Bachelor of Music from the Eastman School of Music, a Master of Music from Rice University, and was a New World Symphony fellow from 2016 to 2019.

Biography courtesy of the IMF.