Melding the worlds of opera and rap is nothing new for award-winning composer and vocalist Steve Wallace. In fact, it was a rap song by Nas that directly influenced Wallace’s newest chamber opera, Undying Love. Set in 1960s Queens, New York, the opera stars soprano Whitney Morrison as Angela, baritone Brian Major as her lover Taylor, and tenors Curtis Bannister and Tyrese Byrd as Carlos and Jesse, respectively, with Chicago’s very own D-Composed accompanying.

Ahead of Hearing in Color‘s Chicago premiere of Undying Love in the Austin neighborhood’s Kehrein Center for the Arts on November 12, Steve Wallace joined WFMT Patner Fellow Adela Skowronski over Zoom to discuss the work, introduce the cast, and dive a little deeper into the concept of a hip hop opera. 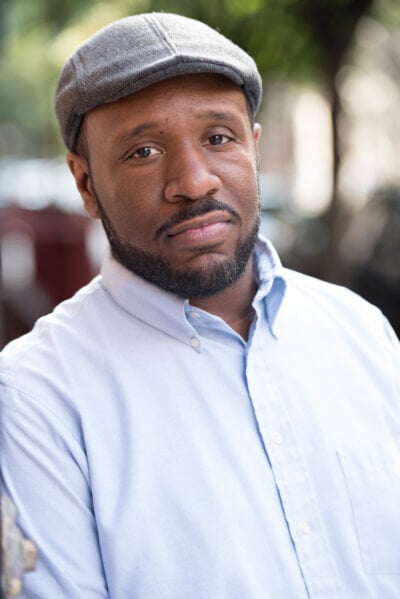 Adela Skowronski: What was your inspiration to fuse classical and hip hop traditions in this opera?

Steve Wallace: It started when I accidentally became a classical vocalist during my undergrad. Before college, I was just genuinely interested in music, everything from jazz, hip hop, classical, anything in between.

But I didn’t know being a music major meant you had to pick an instrument. When I got to school, I was turned into an opera singer all of a sudden; I had to learn the stories, the music, everything. At the same time, I was in a hip hop crew. So I was singing lighter tenor roles in school, I was singing Così fan tutte, but I was also beatboxing, rapping, and making beats at the same time.

And in the midst of it all, Nas dropped his album I Am in 1999. Because I’d been studying roles in Cavalleria Rusticana and Pagliacci, when I heard the last track, “Undying Love,” I said immediately, “This is opera; this is a verismo opera.” I had to do something with this, so I took the bare bones of the narrative, and then re-contextualized and fleshed it out to make it a larger work. So, yeah, that’s where that came from.

Skowronski: Why do you think this fusion works?

Wallace: What connects rap and opera, for me, is the drama. In good opera, there’s less distance between the emotion and the expression of that emotion. It makes things feel very relevant and very current — like it’s happening right now as opposed to in the past. That’s something that exists in hip hop as well.

I always go back to my first visceral reaction when I experienced operas like Carmen or Tosca. When I saw those, I was able to see myself and my culture in it even though it was sung in another language. I was like “Wow, that reminds me of something that happened on my block like last week! Or something I read in the paper.” It wasn’t that far removed. The only thing that’s different is the facade of it all: the language, style, the dressing, as it were. But its essence is the same.

There are musical elements too. Verdi, to me, is very groove-oriented; I’ll be singing opera sometimes, bobbing my head up and down like I’m listening to hip hop. Babatunde Akinbobye, the Hip Hopera guy, The Phantom who directs the Illharmonic Orchestra, they were saying the same thing. They’ll be sitting in a Rossini rehearsal and bouncing. When you have a hip hop background, I think you feel opera from a different perspective. 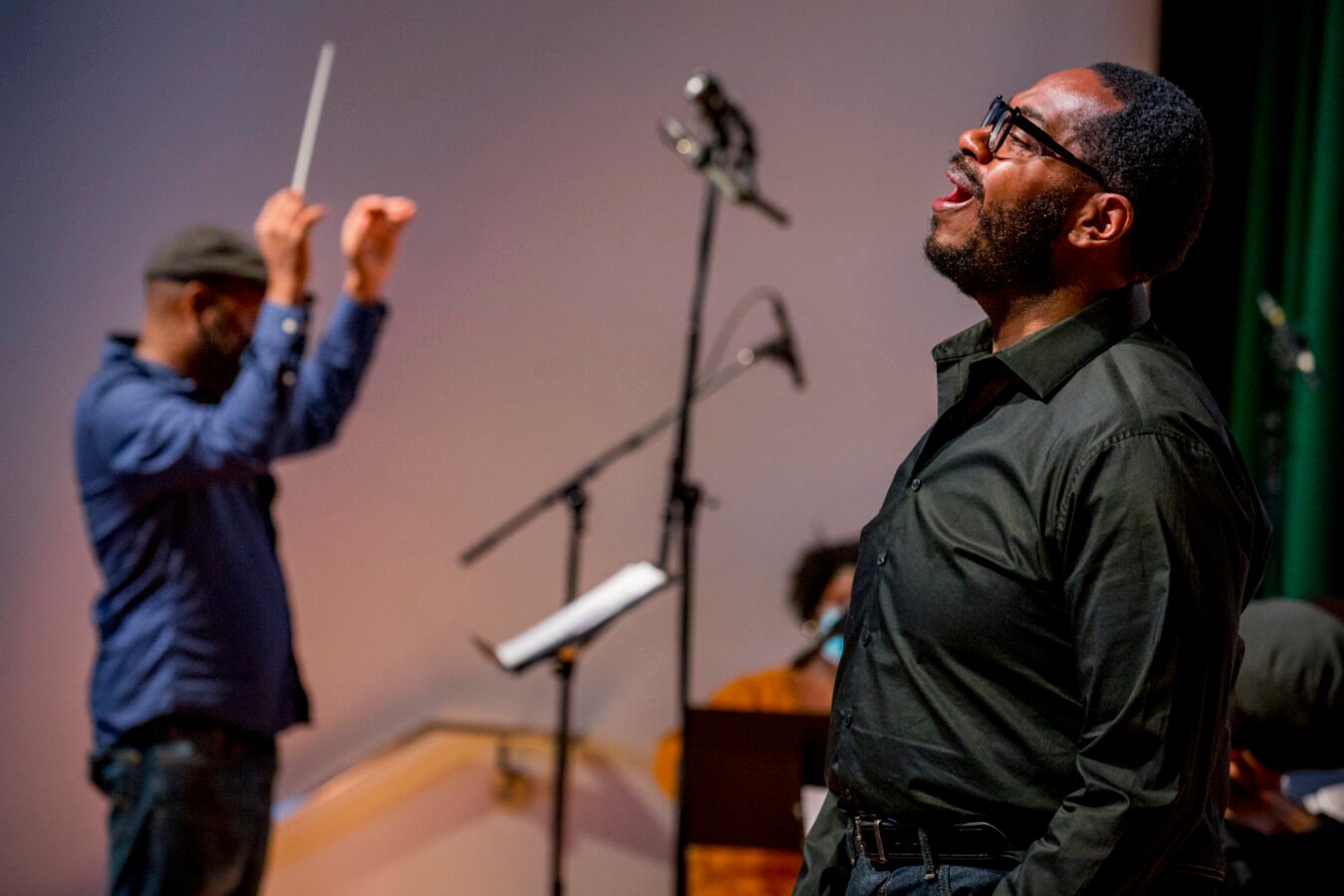 Skowronski: When I said that the fusion of hip hop and opera works really well, your instinct was to say sometimes. In what situations do you think this fusion misses the mark?

Wallace: Just to clarify, I don’t really believe in genre. Hip hop is not a genre; hip hop’s the culture, right, from which rap music has been extracted and made into a genre. But regardless: for whatever you’re blending, the individual or individuals involved need to be equally well-versed in both styles of music.

The problem is you don’t find that often. You’re not going to find somebody that knows how to spit bars and sing an aria equally the same. You will, but it’s few and far between: for every ten opera singers, there’s maybe one at the most. 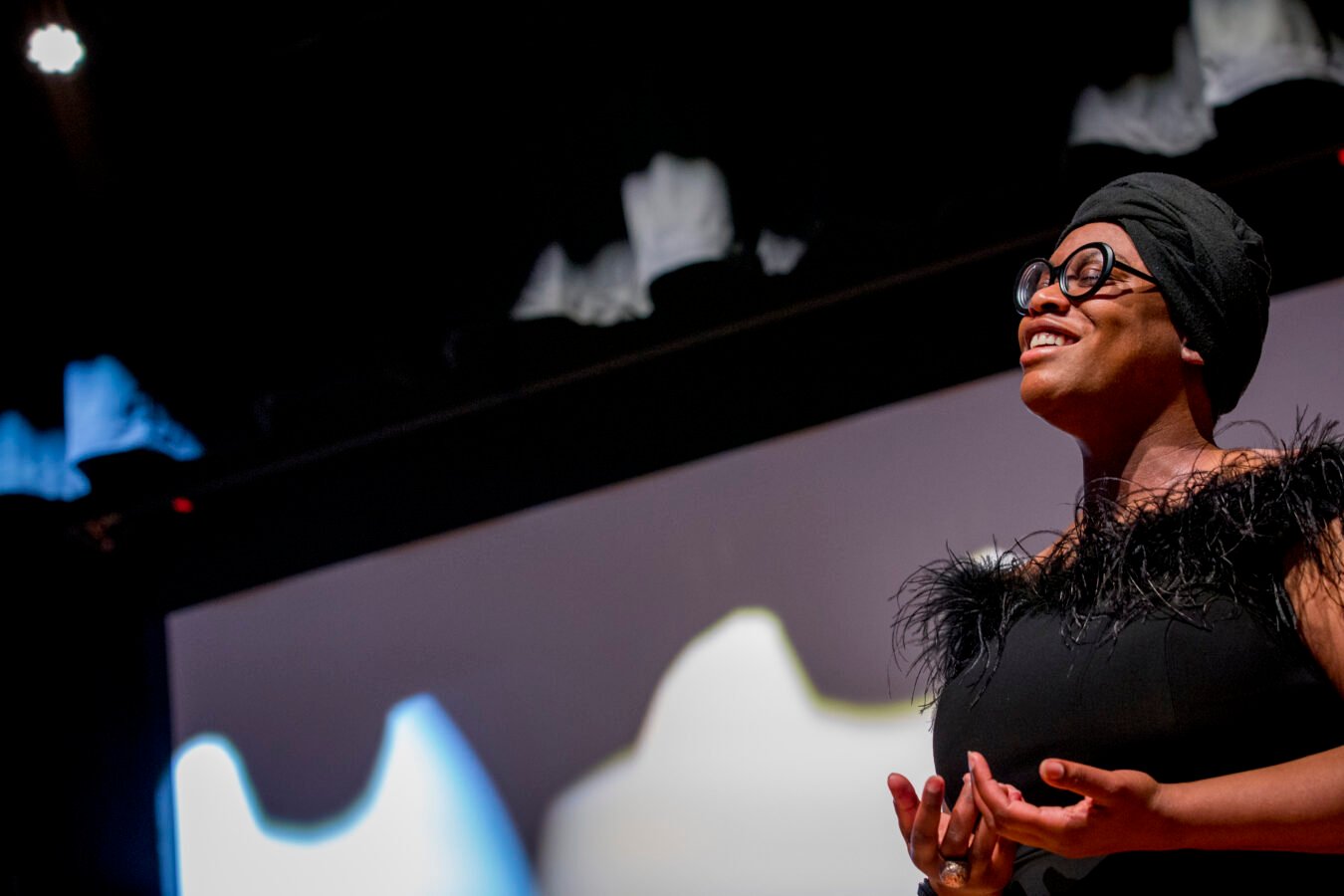 As a composer, I’ve worked with Ghostface, Jadakiss, De la Soul, and also indie rap artists like Substantial. I’ve been in the trenches with hip hop artists; I know what that feels like. But at the same time, I’ve studied orchestration. I didn’t study composition with a formal degree: I was studying these orchestra scores in the middle of opera rehearsals. I understand opera from the inside, you know what I mean? Just like I understand hip hop from the inside. And that’s why I think that the fusion works in my case.

Skowronski: What is something that people could expect to hear when they walk into this opera, and what would you say to someone who is skeptical about this work?

Wallace: Expect great, great singing. Whitney Morrison, Brain Major, Tyrese Byrd, Curtis Bannister… I couldn’t have asked for a better cast. When I finally heard them sing my music, I was like, “Yeah, these are the voices that I had wanted to hear sing this material!”

Then there’s D-Composed as an orchestra. I went in for my first rehearsal with them yesterday and I was blown away. The feel was there with all of them; they knew where each other was going, and there was just nonverbal communication happening between them constantly.

So expect a great orchestra, great singing, and lots of heightened drama. As for people who are on the fence, I would venture to say they’re on either end of the spectrum: either they’re so far away from opera that they feel like it’s not for them, or they’re so deep into the opera world that they feel this is tarnishing something that they love.

For people who don’t think that opera’s relevant for them, I would say focus on the narrative. I always talk about the narrative because stories are always important. One time, I played the finale from Carmenfor this group of high school kids I was teaching in New York City. These are Black and Brown kids, and kids who never listen to opera. But they were into it the whole time! And I think the reason is that we talked about the story in a relevant way. They were expecting certain things. When they saw what was happening on the screen, they were like, “Oh man, this dude is buggin; what is he doing?” Understanding the storyline and connecting with what’s happening on stage, that’s big for everybody.

As for people on the other end of the spectrum, I would say it’s important to understand the idea that this — what I’m writing — is opera. This is a progression for opera. Stories that come from hip hop and those from opera, they’re more alike than we think. Like Nas, for example, he’s a storyteller, a poet, and his stories have moved generations. Editor’s Note: WFMT host LaRob K. Rafael is the artistic director of presenting organization Hearing in Color. This interview has been lightly edited for clarity.

Grammys 2022: See All the Classical+ Nominees (And Winners)
Sing Different: Why the Life of Apple's Steve Jobs Makes for Great Opera
Is This the Real Life? Opera Artists on Singing 'Verismo' With Muti & CSO
Grant Park Music Festival 2023 Season Released
2023 Grammy Nominees Announced: Classical, Jazz, Soundtrack, and More
Capturing the Chevalier, One of the Most Remarkable Stories in Classical Music