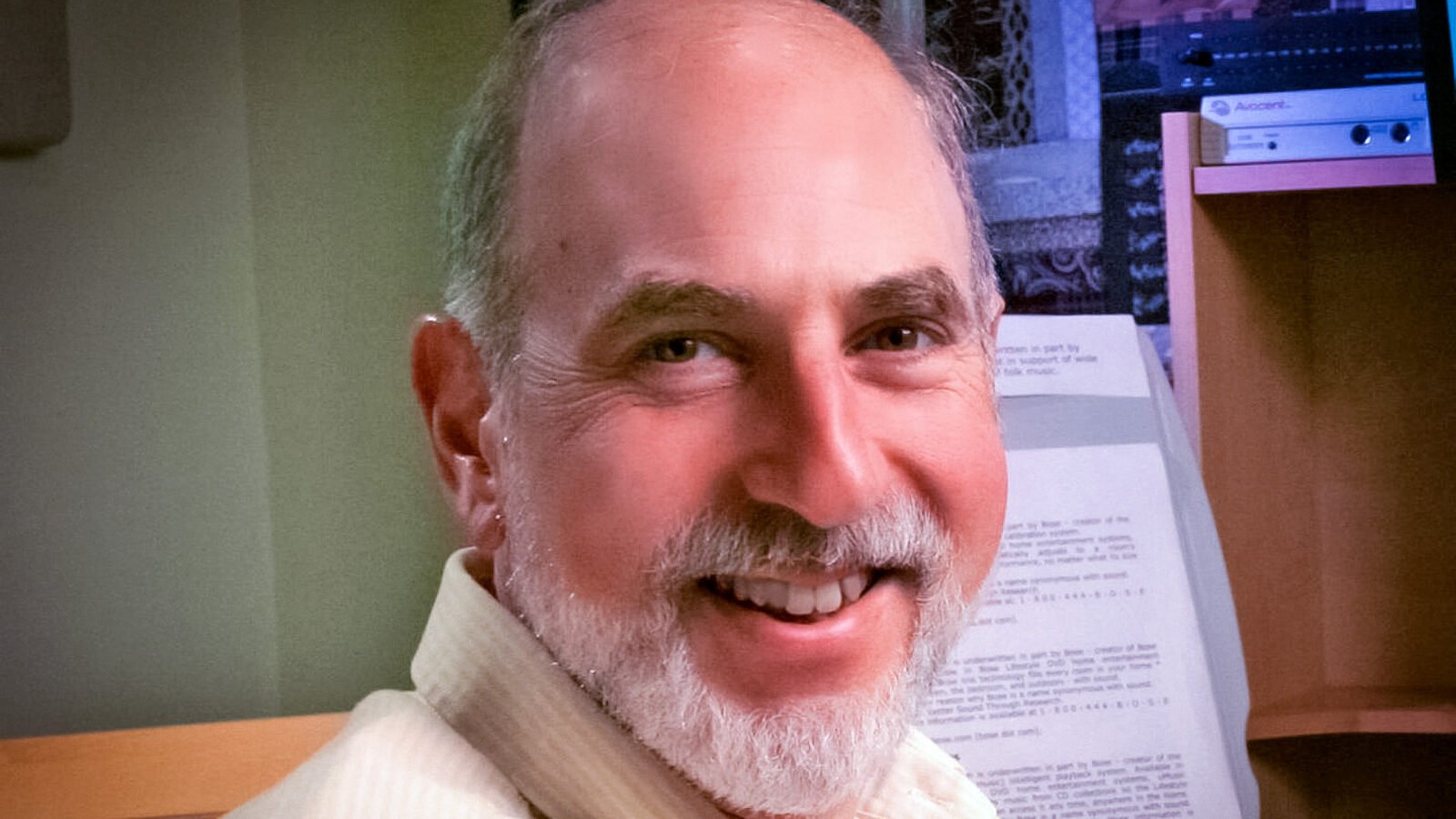 “We wouldn’t have survived without Rich.” – Ed Holstein

Rich Warren retires from WFMT on December 31, 2022, wrapping up a career that has included many an epic New Year’s Eve broadcast on The Midnight Special, a show he began listening to in the ’60s. It was when Rich first tuned in that, as he recounts, “I became addicted.”

Rich’s 54-year radio career started with a toy transmitter set and a knock on the door from a Federal Communications Commission agent who accused the youthful broadcaster of violating federal law. Young Rich had strung wire on the roof of his family’s garage to broadcast his own radio show, and a neighbor mistakenly thought their reception was being infringed upon. (Once apprised, the FCC inspector agreed that it wasn’t an infringement, Rich underlines all these years later.) He has never stopped forging new paths in Chicago radio.

Around 1969, Rich volunteered at WFMT, helping Ray Nordstrand and Norm Pellegrini to organize WFMT’s vast record and tape library and compiling song sets for The Midnight Special. Nordstrand put in a good word with Earl of Old Town folk club proprietor Earl Pionke to let the underage college kid into his club. At the Earl one night, Rich was stunned to hear a diminutive performer singing songs Bonnie Koloc often covered. Koloc said she’d learned them from a leukemia-stricken songwriter with only “days to live.”

Rich approached the singer to applaud his singing of Steve Goodman songs. “Yeah,” said the singer. “I am Steve Goodman.” Goodman then informed the stunned Rich Warren, “Yeah, I know, I know. I’m not dead.” Goodman had received experimental treatments in New York and had come home to Chicago. The eager young broadcaster wasted no time in recording Goodman and bringing the tapes to WFMT which became the songwriter’s radio home until he finally succumbed in 1984. 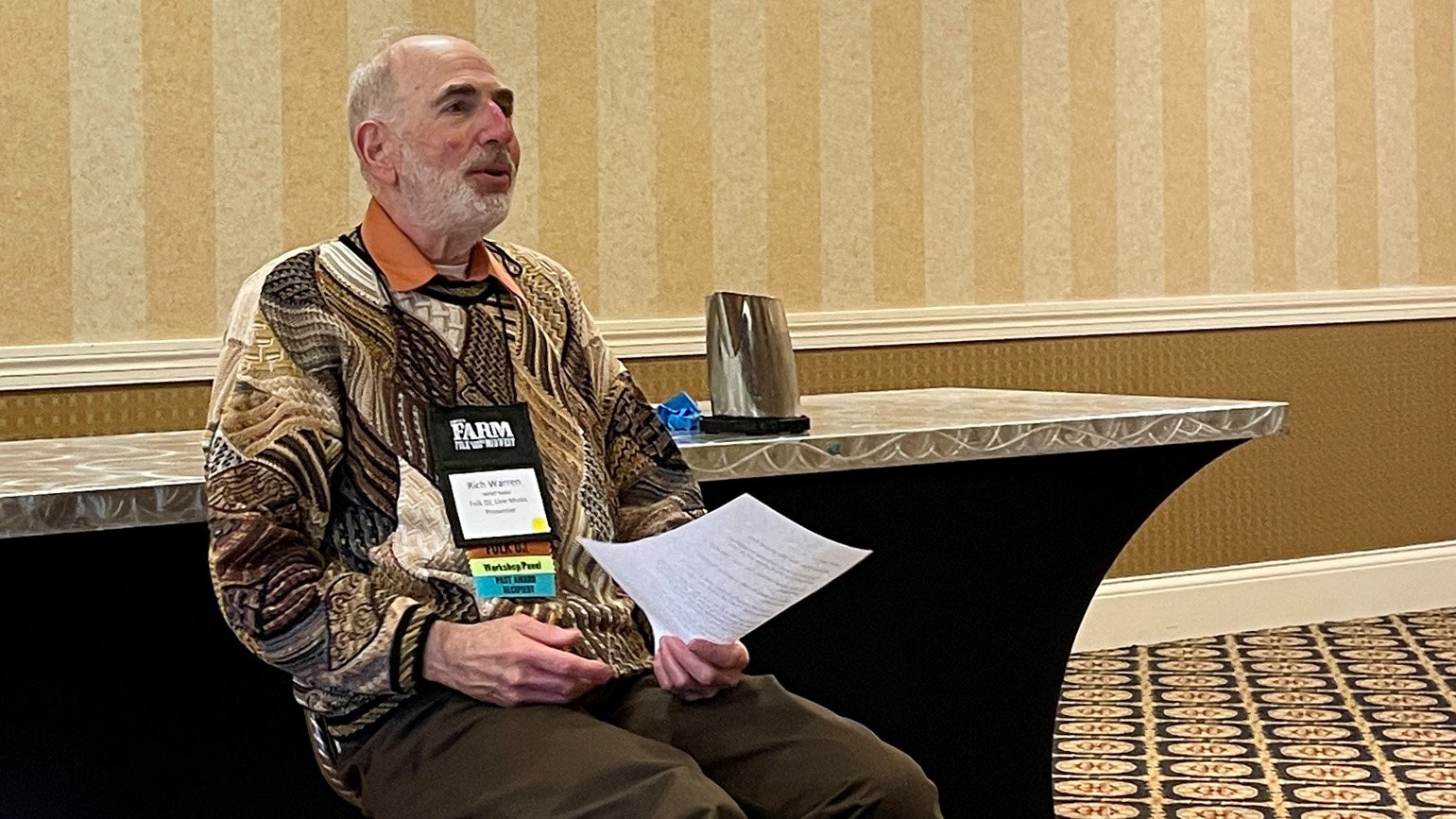 Rich Warren told those stories and many more in a tightly packed session at the recent Folk Alliance Region Midwest (FARM) conference where he summed up the essence of folk music’s connective tissue. “This is community. You can’t isolate yourself and still be in this genre of music! … There’s not a lot of money in this community, it’s the camaraderie that makes it work.”

Since being hired at WFMT in June of 1974, Rich has made it work. Chicago singer-songwriter Ed Holstein, a revered teacher and purveyor of folk music, says, “The folk scene after 1968 would have been impossible without him. Whenever I had an act [at Holstein’s or Somebody Else’s Troubles], he would lug around all that equipment and recorded the show… The music is everything to him, and he created a place for people to hear it. We wouldn’t have survived without Rich.”

For a time, he produced and recorded a different kind of folk legend, Studs Terkel, yet Rich unabashedly declares, “My entire goal in life was to host The Midnight Special.” That came to be in the mid-1980s when he began sharing duties with Pellegrini and Nordstrand before taking sole possession of the host’s chair in 1993.

By then, he was already a force in folk radio, criss-crossing the country in search of new voices while cementing warm relationships with top-tier folk artists. Perhaps John McCutcheon says it best: “Rich Warren has been so much a part of the North American folk music scene it seems impossible to imagine his voice, his enthusiasm, and his influence not filling our airwaves every week. See, Rich believes in music, its power to inspire, inform, and connect us… He knows that radio alone is not enough … and encourages opportunities to bring us together in live performance. Who does that? Rich Warren does.”

As longtime WFMT supporter Nancy Clark puts it, “Rich often shared his discoveries of artists new to us… This practice benefited both the audience and the artists.”

That urge to share musical experiences beyond dropping the needle on the record spurred Rich to launch Folkstage in 1998. He has taken great joy in bringing some of his favorite artists in for live performance broadcasts, interspersed with recordings from WFMT archives, every Saturday night preceding The Midnight Special. When Folk Alliance International created a Folk DJ Hall of Fame, Rich Warren was one of two original inductees. 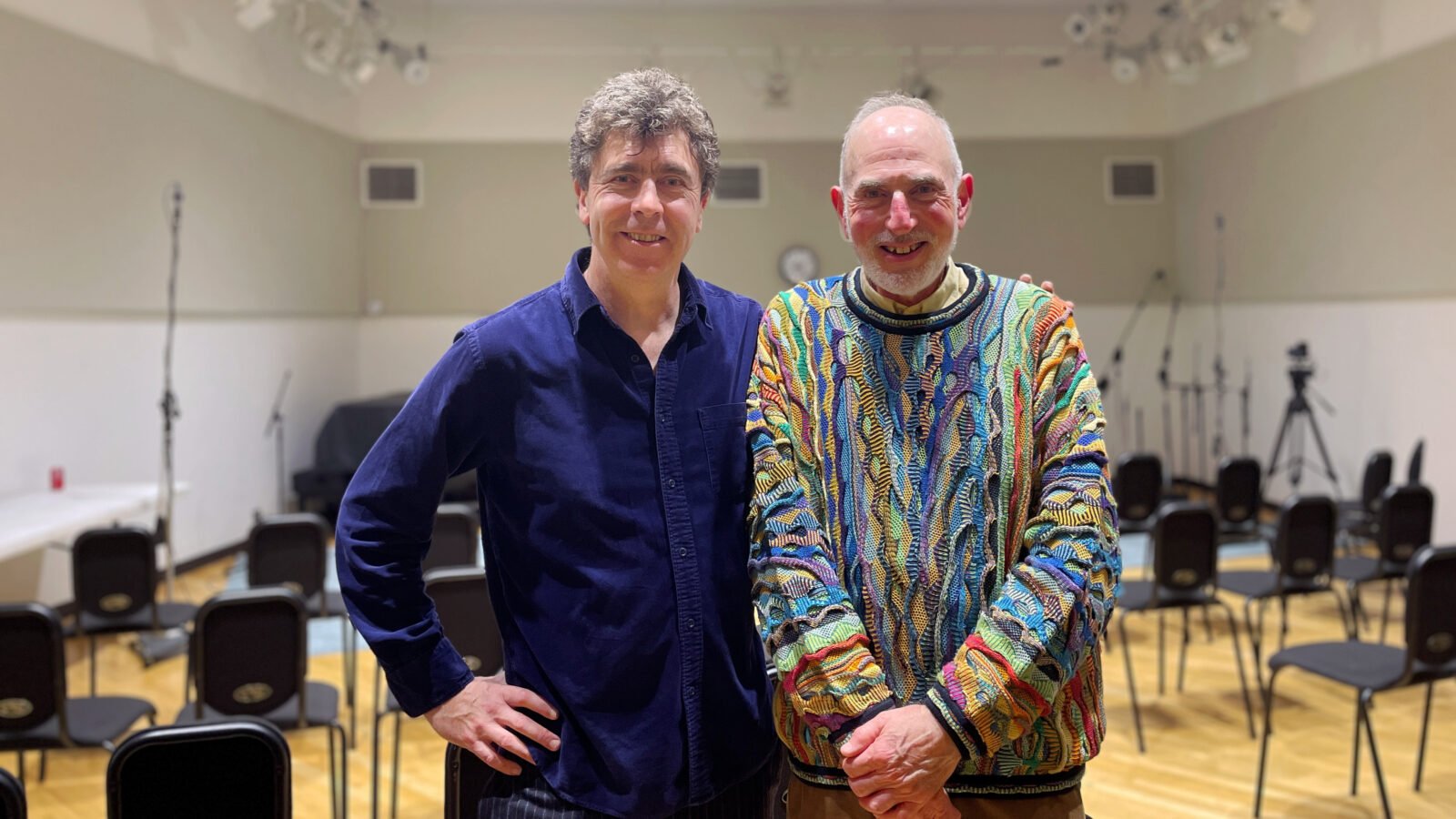 Rich chose to step down as The Midnight Special host in 2020 and continued enthusiastically introducing listeners to new and familiar performers live on Folkstage. Consultant and promoter Kari Estrin dubs Rich, “the ‘gold standard’ of folk radio,” adding that “artists knew they had really made it being aired on Rich’s show!”

Echoing that point is today’s powerhouse protest singer Crys Matthews. She says, “Rich Warren has been unwavering in his commitment to both honor the voices that made the genre what it is and also make room for new voices like mine. I will miss his signature sweaters and equally warm voice a great deal.”

Madeline Fendrick and Brian Peck, AKA Fendrick & Peck, add that “Rich has always made us feel like belong in the folk community, both as artists and as human beings. We believe that art brings people together in a shaky world, and by that definition Rich is one of the great artists of our community!”

That relentless pursuit of connection has gained Rich the respect of colleagues far and wide. Taylor Caffrey of WRKF in Baton Rouge, Louisiana, claims, ” I have run into many people who are familiar with Rich from his time on The Midnight Special… It’s clear his impact on broadcast radio is far-reaching.”

“Rarely do I pick up a CD from an artist who doesn’t pay homage to Rich Warren,” says his friend, Wanda Fischer, award-winning host of The Hudson River Sampler at WAMC, Northeast Public Radio of Albany, New York. “His care and concern for the careers of folk musicians throughout the years are legendary.”

For his part, Rich Warren found his broadcast home early and stayed for good reason, as he said at FARM. “Working for WFMT was an amazing experience… To spend your time with people whose entire passion was somehow involved with music, all kinds of music – I can’t even describe it.” What he does readily describe are the qualities needed to succeed for 54 years in folk radio. Couched as advice to the coming generation of artists and hosts, his comments express his own work ethic: “Never phone it in. Either do it with all your heart, or find a new career. Be enthusiastic; being grumpy doesn’t pay. Bring people up. Help others! And always be yourself.”

His contributions and dedication to WFMT will leave a bright legacy. “The programming that Rich Warren has worked so hard and with such care to present is emblematic of what makes WFMT unique and special to listeners,” says WFMT General Manager George Preston. “He has been the radio standard-bearer of the folk music community in Chicago. I am profoundly grateful for his stewardship and dedication, and I hope WFMT listeners and colleagues will join me in expressing every warm wish as he closes a remarkable chapter in WFMT history and hands off duties to a worthy successor.” 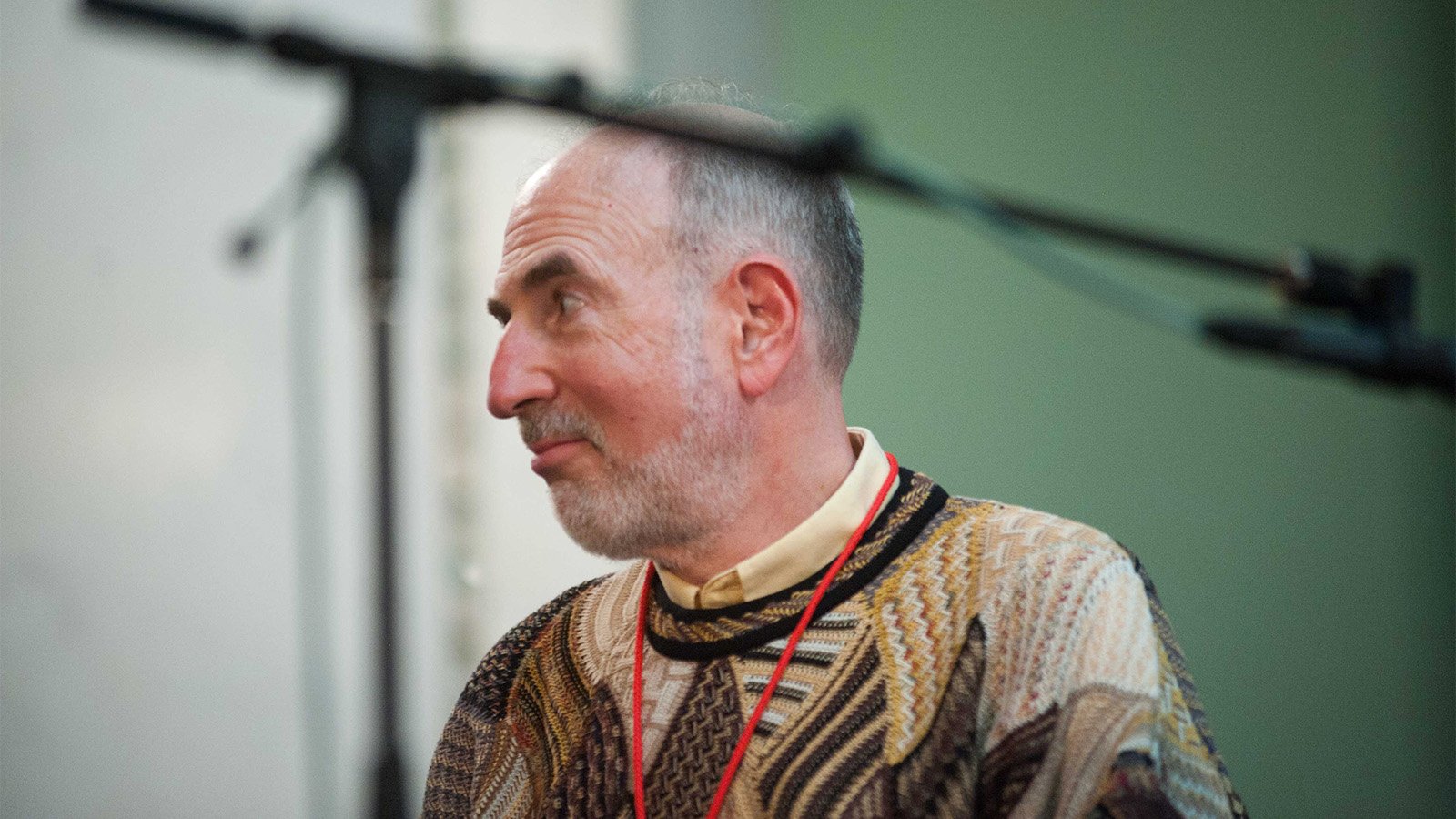 So, if you see a tall, slender fellow with a brightly colored sweater stringing wire on the roof of a neighboring garage, let him be. It’s just Rich Warren making another connection.

This story has been updated to correct information about Rich Warren’s childhood forays into broadcasting and the year that Folkstage began.