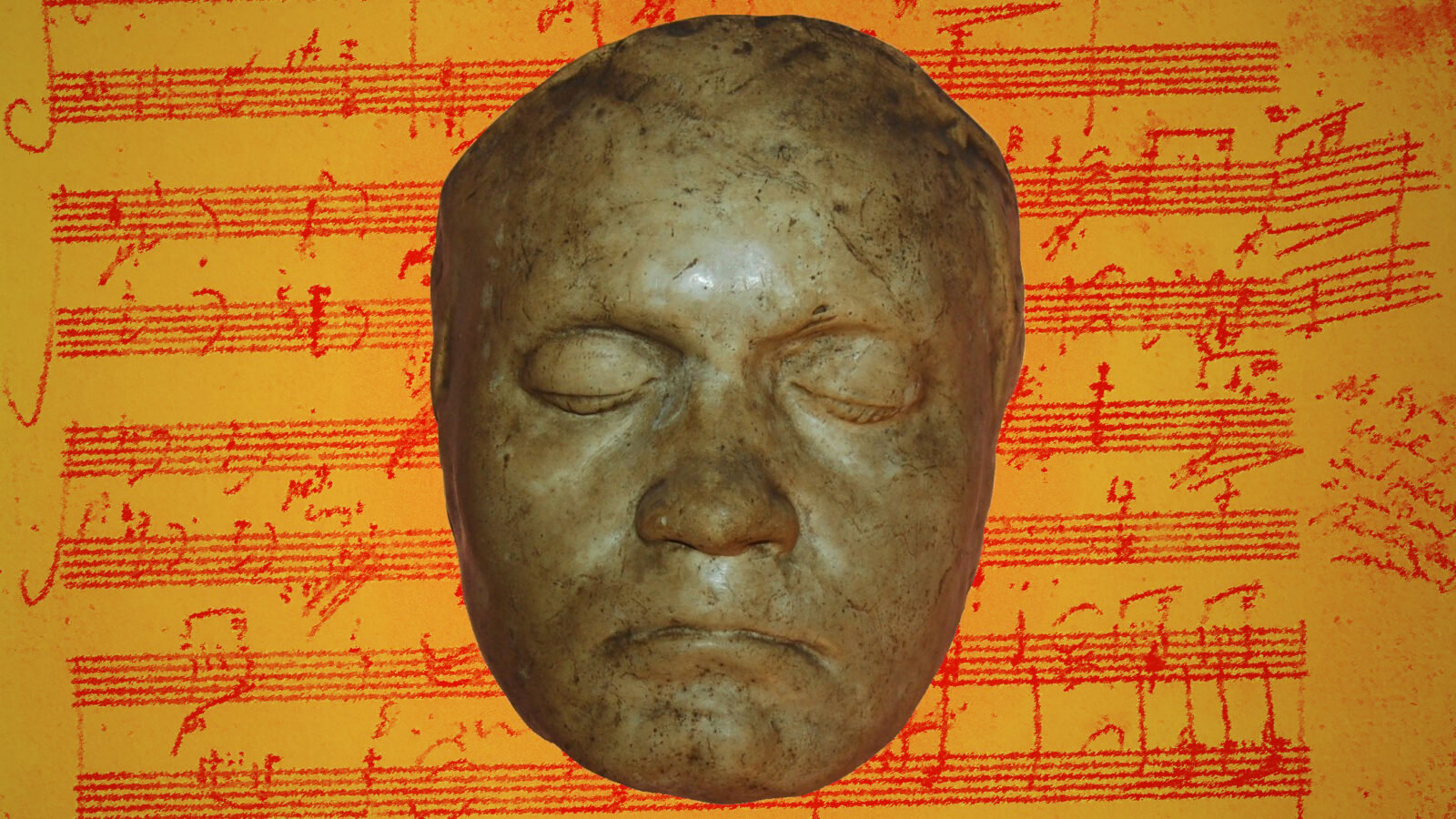 “After the final chord, I looked up. The Master’s darkly glowing gaze was fixed upon me penetratingly. Yet suddenly a benevolent smile broke up his gloomy features, Beethoven became quite close, bent over me, laid his hand on my head and repeatedly stroked my hair. ‘Devil of a fellow’ he whispered, ‘such a young rascal!’ I suddenly plucked up courage. ‘May I play something of yours now?’ I asked cheekily. Beethoven nodded with a smile.”

There are images of the German composer that stick with us: the first four notes of the Fifth Symphony; the stern-faced Andy Warhols, or the anecdote about his shaking his fist at the thunder and lightning as he lay on his deathbed. He seems like such a dour customer, but was he?

Many of the renderings we see today of Beethoven are based on a life mask, which was made in 1812 by an artist named Franz Klein. In this process, the artist covers the subject’s face in oil and inserts straws in the nostrils. Then the artist coats the subject’s face in plaster and lets it dry. The story goes that Beethoven panicked and ripped off the cast from his face; though he later calmed down and permitted a second application. In other words, what’s come to be regarded as Beethoven’s mien, could be a picture of Beethoven under physical distress. Beethoven scholar and Loyola University of Chicago Professor David Dennis gives us a more complete picture:

“The life mask captured many things, including pockmarks that must have resulted from an early illness, and the stern, growling face that has been the basis for almost every portrait ever done of him–posthumously. (There is also a death mask–very gaunt and not what we are talking about.) Yet, the record shows that when Franz Klein made the mask, Beethoven was NOT happy with the experience. One had to sit perfectly still with plaster drying on the face for an extended period of time, breathing–I believe–through straws inserted into the nostrils. No wonder the famous scowl!! However, scholars who have closely looked into the biographical records find that many of Beethoven’s contemporaries described him as a very “complete” personality–often serious, but also fun-loving and even funny. Many descriptions include a reference to him smiling–sometimes wryly or sarcastically–and often laughing–even to the point of laughing so loud and hard that it could be embarrassing in public restaurants, etc. He would also throw the occasional dinner party, and that’s when he probably imbibed in some of the port that may have contributed to the lead poisoning that killed him. All of this leaves us with the need to think of Beethoven as a more rounded person than the life mask leaves us to imagine. He could be grim, grumpy, and furious; but he wasn’t always that. Like his music, his personality covered all sides of what it is to be alive.”

Professor David Dennis teaches Modern European Intellectual History at Loyola University Chicago. He is the author of Beethoven in German Politics, 1870-1989 (Yale, 1996) and Inhumanities: Nazi Interpretations of Western Culture (Cambridge, 2012), among other explorations of the nexus of German politics and culture.

Schubert String Quartets
Grammys 2022: See All the Classical+ Nominees (And Winners)
Music, Fable, and Batman: Why Beethoven's Story Makes for a Perfect Comic Book
From 1-9: Your Guide to Beethoven's Symphonies
Playlist: Your Guide to Chopin's Études
In the Age of the Visual Album, What Can Opera Learn from Beyoncé?