Chicago audiences will know pianist Conrad Tao from his time as Composer-in-Residence with Music in the Loft, and from WFMT’s airwaves. Earlier this year, we featured the 21-year-old pianist as one of our 30 Under 30. WFMT spoke with this talented young performer and composer about his recently released album, Pictures, which is Lisa Flynn’s New Release of the Week. Read our conversation and get a sneak peek at the album.

WFMT: Why is “Pictures at an Exhibition” the centerpiece of your new album?

Conrad Tao: “Pictures at an Exhibition” is kind of a unique little behemoth in the musical repertoire – the Western musical repertoire. It’s a pretty iconic solo piano work, but it’s actually been subjected to so many different arrangements.

Of course, we’ve got Ravel’s orchestration, but we’ve also got versions by people ranging from Emerson Lincoln Palmer to Isao Tomita. Tomita is responsible for my favorite non-piano version of the piece. It’s for synthesizers. It’s very psychedelic, very 70s, and I love it!

But I’m always wondering, “What is it about that piece that inspires so many people to do stuff with it?” And I think that it’s because the original score –the piano score – is kind of an idiosyncratic one.

You look at it, at least I look at it, and I see so much possibility embedded in it. In some ways it’s a sparse score, it’s not full of indications of what one should do performatively or interpretatively, and to me, that’s very exciting. In fact, it makes the score look strikingly contemporary to me, and that’s really kind of the driving factor whenever I play the piece.

It’s a moody piece, it concerns images and memory, and it’s really a reflection on loss and grief in the midst of everything. All of that makes the piece quite powerful and stirring, and it was a really useful seed for this album to grow out of.

WFMT: Why do you say “Pictures” has been “subjected” to arrangements?

Tao: I say “subjected” slightly facetiously. I think of it as just being a piece that has inspired a lot of people to do their own thing with and. Some of those versions are not as good to my mind as others. But such is life, and such is the reality of opening yourself to reinterpretation. So I say “subjected to” with some seriousness, but without malice.

WFMT: Why you paired the other pieces on the album with “Pictures,” especially the Takemitsu?

Tao: I selected Takemitsu’s “Les yeux clos II” to record on this album because it just sonically seemed of a piece with the other pieces I was starting to work with. It seemed to emerge from the big sonic range of colors you get from “Pictures at an Exhibition.” Les yeux clos II,” and Takemitsu’s music in general – but especially this piece, really just seems to have a cavernous depth to it. It seems to kind of come out of the huge heterogeneous sonic terrain of Mussorgsky’s piece as well. You’ve got stuff in the Mussorgsky like “Catacombs,” and “Il vecchio castello.” It’s almost as if you’ve got this massive, implied soundworld. And it seemed to me as if “Les yeux clos II” was a continuation of that. 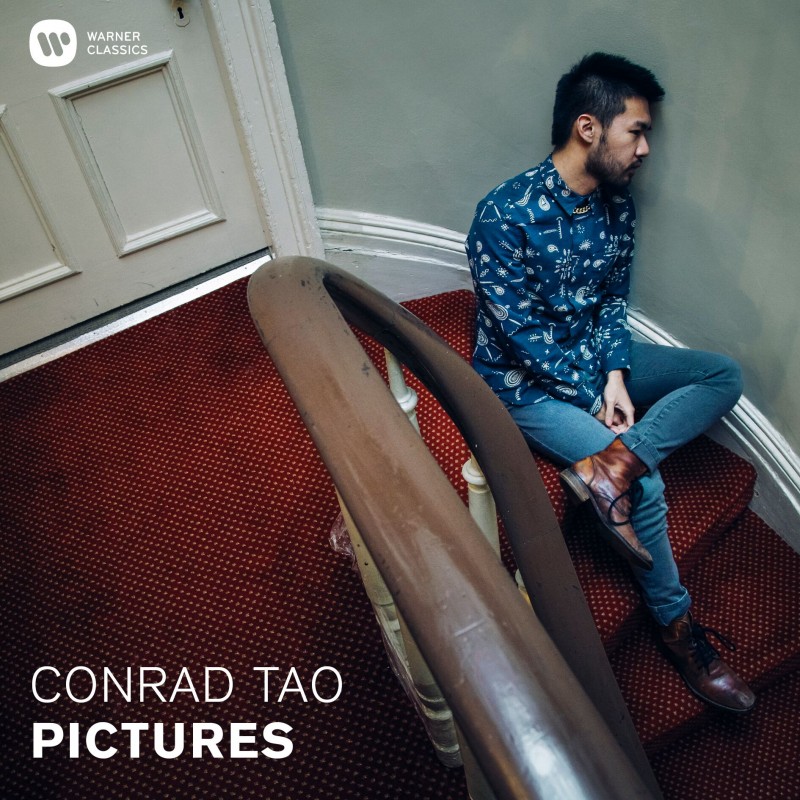 WFMT: Your piece on the album, “a walk (for Emilio),” was written about your teacher. Some of the painful-sounding notes at the end of the piece are striking. Can you tell us about that piece more?

For me, “a walk (for Emilio)” is less about him as a person, and more me reflecting on that sensation of wanting to have an interaction with someone who is no longer alive. So the piece has a few different emotional elements, and one of them is actually anger.

That’s interesting to me in a complex way to me. You have this sort of cocktail of emotions that kind of results for yearning for something that you know is not going to happen. That’s a very odd component of loss and loosing someone close to you.

WFMT: And now for the most important question, where did you get that shirt that you’re wearing in your picture on your album cover?

[Laughs.] That shirt is from Topman. Go forth and get it!

Grammys 2022: See All the Classical+ Nominees (And Winners)
Mozart's Top 10 Works
See Photo Highlights from WFMT's 70th Anniversary Day of Celebration
Joffrey Ballet Announces 2020-21 Season
Decade in Review: The 2010s and Classical Music
In Their Own Words: Inspiring Quotes From Classical Artists, Members of the Arts Community, and Colleagues Who Died in 2021