Behind every great man is a great woman, so the saying goes. In Mozart’s The Marriage of Figaro, the women often run the show. How better to learn about these fascinating female characters than from the women behind Lyric Opera of Chicago’s new production of Mozart’s masterwork? I spoke with Barbara Gaines, the stage director, as well as the opera’s leading ladies to learn what makes the women of Figaro so fantastic.

Gaines admitted that a male performer, Luca Pisaroni, who plays Count Almaviva, described the women of Figaro best, saying, “The men are always at least a step or two behind the women — even Figaro.”

The women of Mozart’s Europe lived in a revolutionary time. But Susanna, the Countess, Marcellina, and the other ladies of Figaro still live in a man’s world. Perhaps that’s why they always need to be a step or two ahead? As Gaines said, “These women are very intuitive and have a high caliber of intelligence. They’re very proactive and often drive the plot.”

In working with the performers to tell this story, however, Gaines said, “I approached the women exactly the same way I approached the men: as human beings with particular frailties.” Gaines, who is the founder and artistic director of Chicago Shakespeare Theater, added, “I approached them the way I would Shakespeare. Mozart was every bit as much of a genius, and did character-specific operas.”

Riffing off Hamlet, Gaines quipped, “Remember: frailty thy name is man and woman. That’s what we tried to explore. The men are deeply vulnerable, I am not saying the women aren’t, but the men definitely are.”

In Figaro, Gaines explained, “The Count is going through a mid-life crisis. Figaro is getting married but he’s not focused on it. Every relationship is so tender, and in some ways so fragile. There’s a very fine line between feeling good and being hurt, and that very fine line exists in every note of Figaro.” 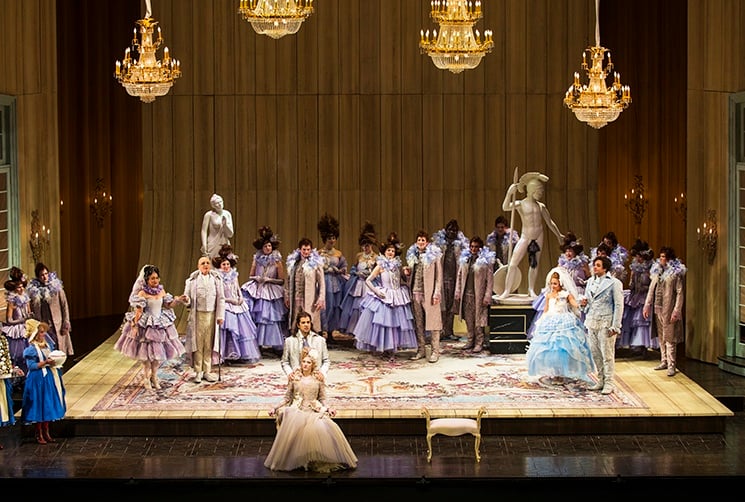 Mars and Venus hold court in the Count’s palace in Barbara Gaines’s new production of The Marriage of Figaro (Photo: Michael Brosilow)

Men are from Mars and women are from Venus, so another saying goes. In Gaines’s Figaro, Mars and Venus literally preside over the action. They are depicted in the show curtain at the top of the opera, and in statuary on stage in Acts III and IV.

When staging the famous aria “Dove sono i bei momenti,” Gaines and soprano Amanda Majeski discovered a moment when the character of the Countess physically and emotionally needs Venus for support. “We decided she should lean on the statue. She needed Venus, assisting her in a way, to remind her that she is strong enough. With the support of Venus, she can continue to fight for the man she loves. And later, at the end of the opera, we found a moment for her to bow to Venus, which was kind of nice.” If your character lived in the 21st century, would she think or act differently than she does in the opera?

I don’t think that emotions can be changed. Jealousy, hate, anger, and love have always existed and will forever. I don’t think we are even that different than in past centuries. Language and expressions may change. But the overall emotions they express are the same.

Susanna works for the Count. What can she do when he goes after her? She tries to avoid being alone with him, to escape his pleas. She is always kind, but still clear that she loves Figaro and wants to marry him.

The big difference between then and now is that in the past, the Count would have had the right to be with Susanna on her wedding night. Susanna’s reaction is more urgent than it might be now because circumstances are different.

All the women are very strong characters and have learned from life. Because of their experiences, they know what they want and also how to get it. They control the scene: knowing how to escape, how to deal with things, what to hide, and what to show. Not every action or plan works immediately, but in the end, they succeed.

The women in Mozart operas can’t be compared. Every woman has her own world and special character. The female characters Mozart created are unique in their personalities and in their music. One thing we can be sure of: Mozart loved women. We can tell from Leporello’s “Catalogue aria,” which describes Don Giovanni’s lovers. Marcellina in Lyric’s The Marriage of Figaro is played by Katharine Goeldner, pictured here with Brindley Sherratt in the role of Bartolo (Photo: Todd Rosenberg)

If your character lived in the 21st century, would she think or act differently than she does in the opera?

In a more old-fashioned production, maybe, but not the Marcellina in our production. The Marcellina Barbara and I have developed is very 21st century – it’s not completely unbelievable that this “modern” Marcellina would think she could marry a man, let’s say…15 years younger than she is. And it is conceivable that a young girl would give up her child and not recognize him years later – hence the surprise in the 3rd act. My/our Marcellina is very forceful and independent. (And perhaps just a TOUCH manipulative.) She knows what she wants and she goes after it.

I would say that the Countess is a woman in love with a husband who loves her, but cannot stay faithful. And that of course creates a sadness in her that she has to live with every day. That sadness, that longing for the early days of their love when she was the one he worshiped and gave all his attention to…that sadness is what gives her two arias their heart-wrenching color. Mozart composed those feelings so extraordinarily well.

Susanna is very practical, wise beyond her years, and totally has Figaro wrapped around her little finger.

Barbarina is a very young adolescent girl with a huge crush on Cherubino. She’s a bit naive, perhaps. You know the Count has been inappropriate with her, but she doesn’t quite get why that’s a problem…

Marcellina – I think I’ve described her well in the question above. In this production, she’s just a little OTT. She thinks she’s wearing the height of fashion, but her taste is a tad questionable. And she has that problem of being a “somewhat” older woman trying too hard to look younger than she is. We all know that person.

I have sung and seen a LOT of Mozart (I live in Salzburg, his hometown), and I would say that the women in Figaro are some of Mozart’s best-defined, most complex characters. Their music is more varied than in any of his other operas (with the possible exception of Donna Anna in Don Giovanni.) Most of his other female characters – Fiordiligi and Dorabella, Konstanze, Ilia and Elettra, even Pamina – don’t go through the vocal journey that Susanna and the Countess do, in particular. Amanda Majeski returns to Lyric Opera of Chicago to perform the role of the Countess in The Marriage of Figaro (Photo: Todd Rosenberg)

The women in Figaro are real! They behave as a real woman would, and have true emotions. They experience love, feel heartache, share experiences with each other, are fun, funny, and witty! They are also incredibly intelligent and really hold the upper hand throughout most of the opera.

For me, the Countess is the most relatable woman I play. She’s someone who I could imagine sitting down having a coffee and talking over life’s problems with. She would have the answer of how to solve them! Sometimes Mozart’s women can be a bit larger than life (I’m thinking Vitellia). But the Countess is down to earth, real, and natural.

For more information about Lyric Opera of Chicago’s The Marriage of Figaro, visit Lyric’s website.

In the Age of the Visual Album, What Can Opera Learn from Beyoncé?
Grammys 2022: See All the Classical+ Nominees (And Winners)
10 Woman Conductors You Should Know
Enrique Mazzola on Returning to the Stage, Taking the Reins at Lyric
Lyric Announces 2021-22 Season With 'Magic Flute,' 'Macbeth,' Mazzola
6 Easy Steps to Finding a New Instrument