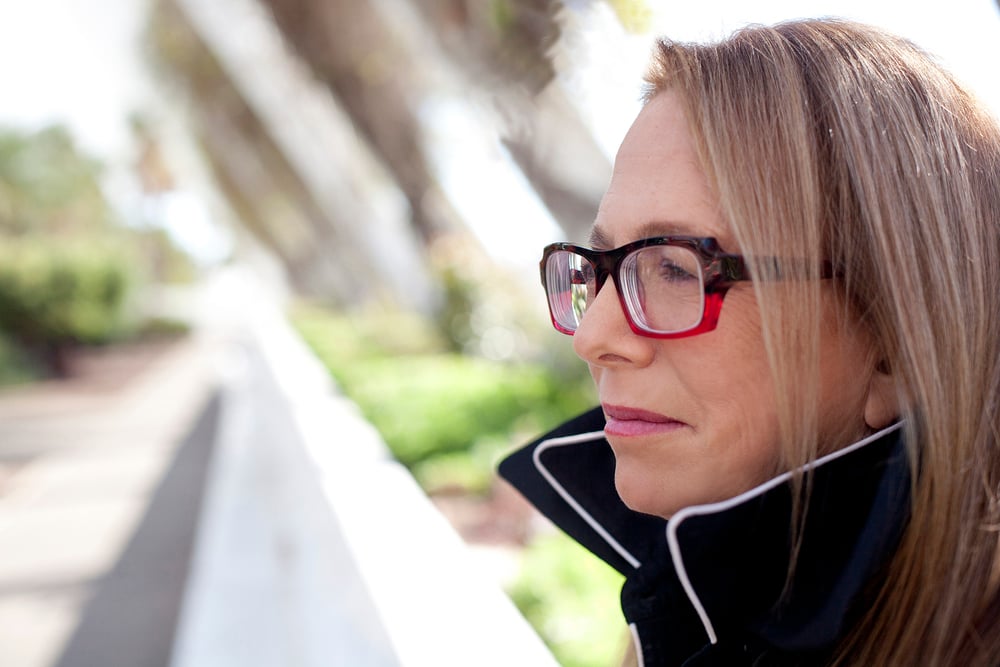 Composer Laura Karpman, whose new work “Ask Your Mama,” has been nominated for three 2016 Grammy Awards

In 2009, composer Laura Karpman unveiled a new work, Ask Your Mama, during Carnegie Hall’s HONOR! Festival that celebrated African American music and culture. Inspired by Langston Hughes’s poem of the same name, Ask Your Mama is a multimedia exploration of the black experience. But Karpman herself is not black.

“I’m a white composer, living in white privilege, setting the poetry of Langston Hughes,” Karpman said in a recent interview from her home in Los Angeles. But how can a white, Juilliard-educated, Emmy Award-winning composer give voice to the black experience?

Ask Your Mama was programmed by soprano Jessye Norman, who curated the Honor! Festival for Carnegie Hall, where she is also on the Board of Trustees. “I knew Jessye because we collaborated on a very different project,” Karpman said. “I did something very uncharacteristic of me which is say, ‘You have to do Ask Your Mama!’”

A first edition of “Ask Your Mama.

When Karpman encountered Langston Hughes’s poem, she was instantly fascinated. “I had this music that was rejected by CBS,” she said. “I did this neo-noir groovy jazz piece and I thought, ‘I need to find some jazz poetry.’  So I looked through the white jazz poets, and then I came across Ask Your Mama and I went out of my mind.”

“It’s a great poem – period. It’s a great American poem that’s often relegated to African American studies. Everyone reads Leaves of Grass, why not also read Ask your Mama? It is a great work of American literature – period.”

“For a long time, I didn’t know this poem. I didn’t know much of Langston Hughes’s poetry,” she confessed. “When I was growing up, it wasn’t taught in schools at all, but Ask Your Mama is a crucially important and relevant American text. It spoke to me. It moved me. I felt like I could help shepherd it, along with a lot of people, into the world.”

While Hughes’s writing may be underappreciated by wide audiences today, it’s perfect to set to music. His entire body of work is infused with an undeniable musicality, and music is often the subject of his writing.

Hughes’ first published collection, The Weary Blues, references African American music in the title poem. Later, Hughes would write the libretto to an opera, Mulatto, the book to a gospel play, Tambourines to Glory, and the lyrics to Kurt Weill’s Street Scene. Hughes even wrote two illustrated children’s books about African American music and musicians: The First Book of Jazz and Marian Anderson: Famous Concert Singer.

“The First Book of Jazz,” one of Langston Hughes many writings about music

Ask Your Mama: 12 Moods for Jazz was Hughes’s poetic response to riots that erupted at the Newport Jazz Festival in 1960. Though the riots have since been proven to be the result of overcrowding in the tiny seaport town, there’s no doubt that racial tensions were high.

That same year, Charles Mingus and Max Roach were furious that many mainstream white artists were programmed to appear during the Newport Jazz Festival, rather than African American innovators. They organized a rival festival in the same town.

Hughes’s Ask Your Mama is, unsurprisingly, full of music.

“He gives you a musical roadmap for the poem, and it’s just an astonishing work,” Karpman explained. “When you open up Ask Your Mama, the first thing you see is music notation. He notates the ‘Hesitation Blues,’ an old blues song, then he notates ‘Shave and a Haircut,’ and he says that these are the basic leitmotivs of the poem. Then you turn the page and there’s a dedication to Louis Armstrong. Then, you turn the page and see you ‘Cultural Exchange,’ the first movement, and he mentions Leontyne Price.”

Particularly because of the reference to Leontyne Price, the trailblazing African American soprano, Karpman thought Jessye Norman would be the perfect collaborator. The first part of their process was to sit together with the poem. Then, Norman “sang spirituals into my ear and I was feverish. She said, ‘Let’s do it!’”

But creating this work was not without its challenges. “I wanted to make sure that I respected the material.”

For guidance, Karman relied first and foremost on Norman. She said of the soprano, “She’s a brilliant, brilliant musician. She had a lot of things to say. There are a lot of specific things that she doesn’t like. For example, she does not like to be doubled by the violins – she does not do that! But she had lots of great suggestions.”

“Langston Hughes calls for ‘Glory, Glory Hallelujah’ at one point during the poem,” Karpman said, “and I superimposed it with Sojourner Truth’s ‘Ain’t I A Woman.’ But after we workshopped it, she suggested we bring in ‘Deep River,’ which just took it over the top!”

Besides the support of Norman, Karpman consulted with Arnold Rampersad, the author of Oxford’s The Life of Langston Hughes. She also worked with Derrick Bell, a civil rights attorney and the first tenured African American faculty member at Harvard Law School.

“Can I perform racist moments from our musical history at Carnegie Hall? How am I doing? Is this right? Am I doing this right? What am I missing?” These are the questions Karpman continued to ask herself and others she brought into her artistic process.

To overcome some of the emotional challenges of giving voice to a black author as a white composer, Karpman relied on her unique skills working with mixed media. “One reason I thought I could do it is because I am a film composer, and Hughes asked for such musical gymnastics – being able to go through these rapid stylistic changes,” she said. “That’s not only my background as a musician, but I have experience doing that writing media music.”

Ultimately, she admits, “There will always be people who think it’s not all right for someone who is white to work on this material. Rampersad reminded me, ‘Hughes collaborated will all kinds of people. He worked with Kurt Weill… all kinds of people. If you feel that you can do justice to this text, then do it.’”

“White people make assumptions that are incorrect all the time. It is a lifelong journey, as a person who has benefited from white privilege, to examine our own behavior and our own assumptions. I am on that journey,” she said honestly. “It’s our journey. Part of what I wanted to do with this piece is have uncomfortable conversations about uncomfortable topics.”

But to create that conversation, Karpman and Norman had to assemble the right musicians. “Jessye and I wanted to workshop it in Michigan, and we wanted to find a hip hop group to work with us. At the time, Rich Nichols, who was the manager of The Roots and who has since very tragically passed away, said, ‘Yes!’ I didn’t even have to convince him, he just said, ‘We’re in.’ All the right people came in at the right time, and the piece continues to evolve like jazz.”

Karpman also wanted to literally give voice to Langston Hughes in the piece by using recordings of him throughout.

“I wanted to bring the recording studio into the performance hall but in a way that fits with the culture of concert music,” she said. “I knew I wanted to use Langston Hughes’s voice. But I also wanted to use other primary sources.”

“So when Langston Hughes indicates there should be a twelve-bar blues, the orchestra doesn’t have to play ‘St. James Infirmary.’ Instead, I could trigger a recording and have the orchestra play along. The Langston Hughes playlist could exist in the concert hall along with the symphonic music.”

All of the archival sounds are triggered using laptops live during each performance. “The conductor gives a downbeat and you cue Hughes’ voice. Then, the other laptop could cue recordings of say, Ella Fitzgerald, or other archival material. The orchestra is never tied to a pre-record.” To add to the complexity, Karpman also includes video projections (pictured below) behind the musicians during live performances.

“First, I laid down the drums with Questlove,” she said. “If you have drums before you have orchestra, the orchestra will groove. But if you have to record the rhythm after, you’re not going to get the swing. So I recorded all the percussion first.”

“Then we recorded with the San Francisco Ballet Orchestra. Everything was edited by me, and then we started laying down vocals.”

Though Norman was essential to realizing Ask Your Mama, she is not featured on the recording. “It took two singers to do the Jessye Norman part on the recording because her voice is just so remarkable. At the end of the piece, I have her on a high C and then she goes down to a low C below middle C – her register is phenomenal.”

Though some of the musicians are different on the album – singers Janai Brugger and Angela Brown replace Norman – the piece did not suffer. “In the recording, more than in the performances, there’s an intimacy to being at home and in the home studio. People felt freer to improvise there than they did on stage. It almost took on another life,” Karpman said.”

Karpman’s recording of Ask Your Mama won two 2016 Grammy Awards including Best Engineered Album (Classical) and Producer of the Year (Classical). The album was also nominated for Best Classical Compendium.

70th Anniversary Special: Interview with Almita & Roland Vamos
In Their Own Words: Quotes From Artists and Friends of WFMT Who Died in 2020
Benny Kim and Grace Fong
Trio Celeste [Rebroadcast]
In Their Own Words: Inspiring Quotes From Classical Artists, Members of the Arts Community, and Colleagues Who Died in 2021
From the Studs Terkel Radio Archive: 7 Conversations with Poets for National Poetry Month