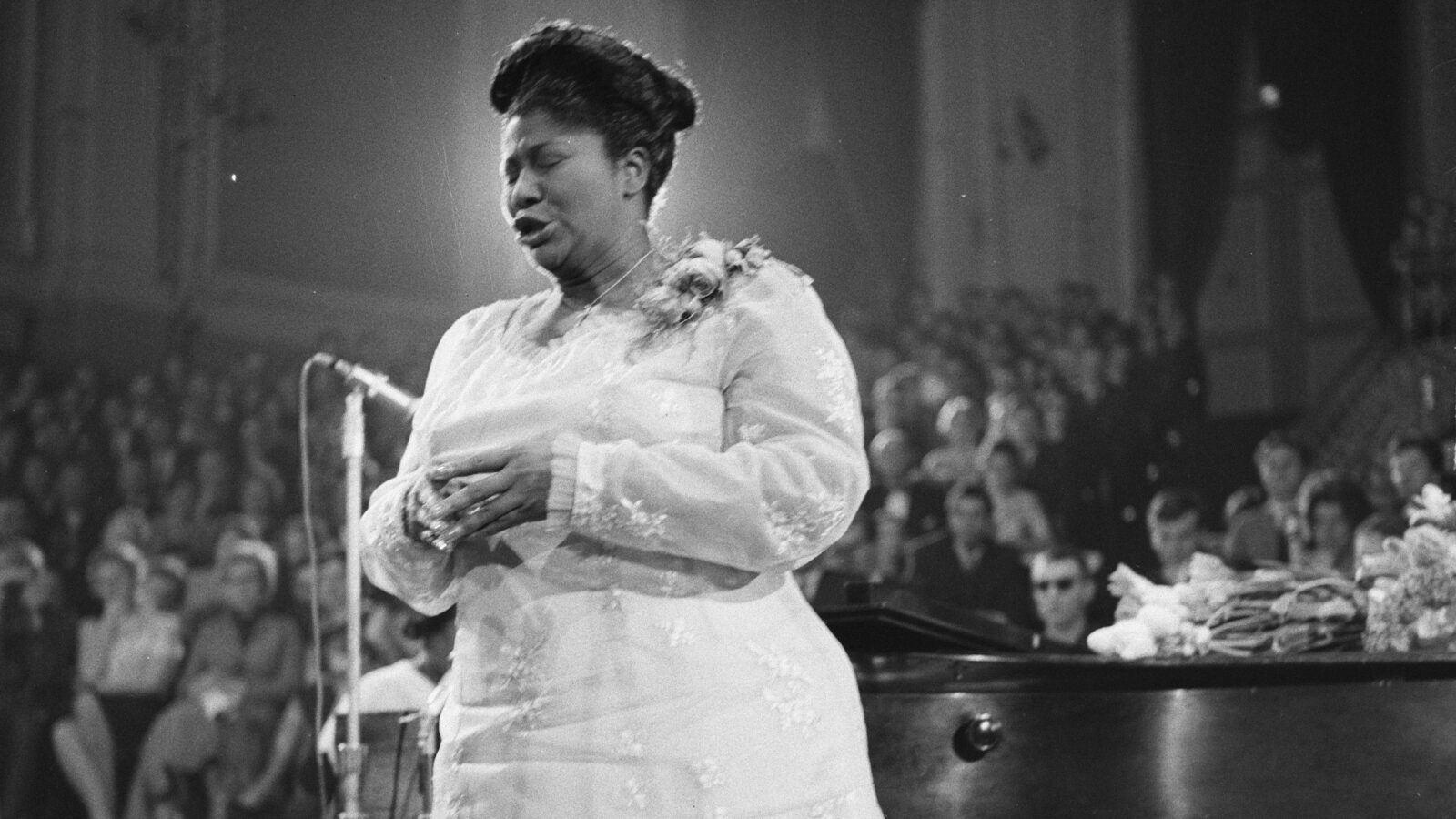 Mahalia Jackson in concert at the Concertgebouw Amsterdam, April 23, 1961

Mahalia Jackson is undoubtedly one of the most influential singers of the 20th century. She not only used her incredible contralto to delight music lovers. She also used her voice to call for social justice during the dawn of the Civil Rights movement in the United States. In fact, during the historic March on Washington in 1963, Jackson encouraged Dr. Martin Luther King Jr. to deliver one of his most famous orations. 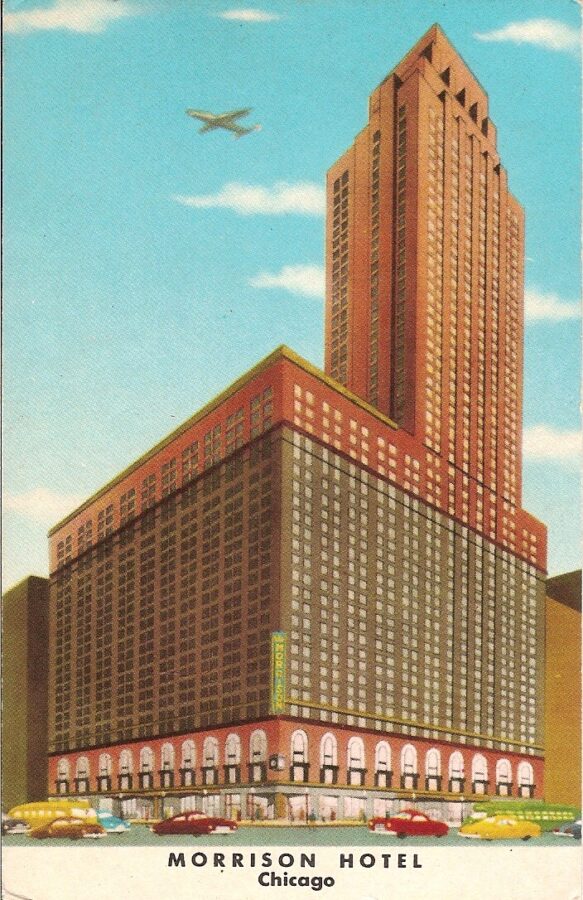 A postcard of the Morrison Hotel, where Mahalia Jackson recorded a live broadcast with Studs Terkel for WFMT, from the 1950s

Jackson, seated behind King, shouted, “Tell them about the dream, Martin!” which prompted him to improvise upon a pre-drafted speech. Clarence B. Jones, an adviser and speech writer for King, watched as King pushed his papers to the side of the lectern, and in a recent interview affirmed  that the most celebrated parts of the speech were delivered extemporaneously.

Before King spoke, he paused and looked out and the enormous crowds on the National Mall in Washington. Jones said to the person seated next to him, “these people out there – they don’t know it, but they are about to go to church.” Were it not for Jackson, known as the “Queen of Gospel,” King might not have taken us to church at all.

Jackson might not have reached wide audiences were it not for the advocacy of WFMT’s Studs Terkel. Jackson joined him at the WFMT studios on the Studs Terkel Program several times. Studs also recorded a program with Dr. Martin Luther King Jr. at Jackson’s Chicago home, which you can hear in its entirety on WFMT.com, while the “Queen of Gospel” sits and listens on her bed.

Later, Jackson joined Studs for a very special live concert on September 30, 1957 that was broadcast from the Morrison Hotel. The building, which stood at 15-29 South Clark Street in downtown Chicago, was demolished in 1965.

During the broadcast, Jackson performed over a dozen works accompanied by the inimitable Mildred Falls at the piano. The set list included “His Eye Is On the Sparrow,” “Joshua Fit the Battle,” “When the Saints Go Marching In,” and her famous mash-up of “Summertime” and “Sometimes I Feel Like a Motherless Child.”

What makes Jackson the Queen of Gospel? Dr. Johari Jabir, associate professor of African-American Studies at the University of Illinois at Chicago, said that “Jackson was a descendant of the black female singers who came before her including Bessie Smith and Ma Rainey, who sang the blues. The blues came out of the black working class tradition of sharecropping, and she inherited that tradition of black music making.” 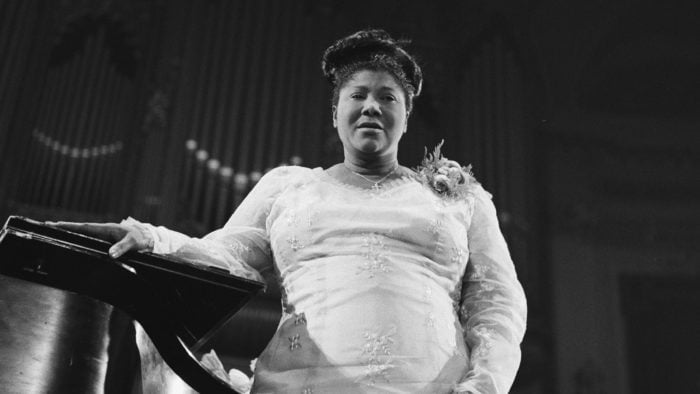 Mahalia Jackson performs in the Royal Concertgebouw in Amsterdam

While earlier writings on Jackson, especially by James Baldwin and Ralph Ellison, discussed her music in almost purely anthropological terms, Jabir hopes that audiences today will appreciate her individual achievements. “There’s more to her artistry than natural talent,” he said. “She was very intentional about her phrasing. She could use her voice very percussively, adding syllables to lengthen words and to great effect.”

“She is known in particular for the weight of her voice. It’s a very heavy voice, which helps to put forth force. But it’s also a weight that she controls so that it floats at times. She was very flexible. She could easily access a head voice or create a sound to mimic a train. That contributed to a kind of dark color to her voice that people, and black people in particular, could identify with in that moment in time, given the mood of the nation.”

Though many great singers past and present are known for their ability to add elaborate vocal ornaments to simple melodies, Jackson was, “more minimalist than anything,” Jabir said. “Sometimes there isn’t a melisma until the very end of a song. She doesn’t do a lot to the song, as much as she does through it.”

“Her role as an artist had a political role, too, that connected her to Dr. King,” Jabir explained. “She’s not singing at these rallies just because she can sing. There’s a lot of black people who can sing. Her job is not to get the audience aroused, but to deliver a testament about the black experience through her artistry.”

Hear Jackson’s rarely-heard live performance from the Morrison Hotel and individual selections from it below, courtesy of the Studs Terkel Radio Archive and the Chicago History Museum, and let the Queen of Gospel take you to church.