Invitation to a Die-In by Nkeiru Okoye was commissioned to remember Trayvon Martin (Photo: David Shankbone, CC BY)

In 2015, American police officers killed 346 Black people, nearly one third of which were identified as unarmed. That year, Nkeiru Okoye began creating a “sung story” that is both “monodrama and performance art” to memorialize Black lives that have been lost.

Invitation to a Die-In had its world premiere performances by the Mount Holyoke Symphony Orchestra in January 2017. Music director Ng Tian Hui commissioned the piece to remember Trayvon Martin, a 17-year-old African American who was shot by George Zimmerman in 2012. In 2013, Zimmerman was acquitted of second-degree murder and manslaughter.

“I wanted the piece to be like Haydn’s ‘Farewell’ Symphony,” the composer said. In Haydn’s work, the musicians are instructed to stop playing, snuff out the candles on their music stands, and leave the performance space until only two muted violins are left. Okoye decided that for her piece, “instead of the orchestra members walking off stage, they would be shot – not literally – but that there would be gunshots represented in the music, and that the musicians would fall down.”

“It could be anyone’s kid, or brother, or sibling, or father, or uncle…”

To write this piece, Okoye worked with librettist David Cote, theater editor and chief drama critic for Time Out New York. “He didn’t think he would be able to write this because he’s a white man. We talked about it because I’m a Black woman. David decided what the piece is about,” she said. In Invitation to a Die-In, “a deceased man is thinking about why he was murdered by the police.”

Okoye did, however, decide to change the first ending to the monodrama that Cote proposed. “If it ends with him pleading for his life, it changes the whole the tenor,” she said. Instead, “this officer, who is obviously afraid, guns him down, but he also guns down the whole orchestra.”

While the commission memorializes Trayvon Martin, Okoye said, “It could be anyone’s kid, or brother, or sibling, or father, or uncle walking down the street and that’s what makes it so upsetting.” Read the full text of the piece at the bottom of this page.

“How do you write about someone’s violent death?”

“In terms of the musical aspects, the first part is really disturbing. It begins with a quotation from a spiritual, ‘Who’ll Be a Witness for My Lord.’” Though many arrangements of this spiritual are up-tempo, Okoye’s setting is somber. “It calls you to attention and makes you accountable.”

The orchestra provides a haunting and dissonant accompaniment. “I use set series or twelve tones in a lot of music,” which often can create dissonances. “You just don’t hear it as much because I do it in ways that are less noticeable. In this piece, there can’t be functional theory. How do you write about someone’s violent death using traditional harmony? It has to be difficult, it has to be angry.” 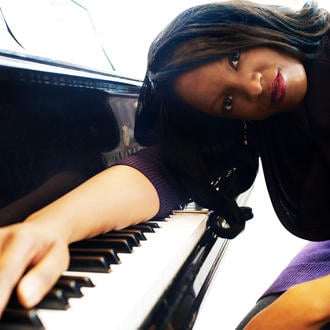 For Invitation, Okoye “wrote up a diagram of the piece’s main motive which is six notes that you hear first in the clarinet when it first starts. I transposed it a few times and did some segmentation. That’s a very different approach to composing something more tonal that’s more melodic.”

“I used the orchestra as its own African drumming ensemble,” Okoye explained. “First,  I had certain members clapping, others doing thigh slaps. Then the conductor said we can’t have them put instruments down, so they would stamp their feet and slap their arms to create a very African dance-inspired sound. There’re also lots of mixed meters – you go from 5/8 to 3/8 to 2/8 and it gives it a very African sound. Of course, there’s also percussion, which includes timpani, and you need a midrange drum like the taiko, and congos or bongos for the higher drums.” The score also calls for a drum set, marimba, glockenspiel, tambourine, and a Gankokwe – an African cow bell.

“It sounds haunted, and it’s deliberately done in that way. My heart began to race when I was listening to this piece for the first time.  It’s upsetting for me to listen to. I don’t like this piece,” Okoye said.

One of the most challenging aspects for her was symbolically killing singer Damian Norfleet, who sang in the premiere performance of Invitation. Norfleet also created the role of John Tubman in Okoye’s first opera, Harriet Tubman: When I Crossed That Line to Freedom.

“I have an attachment to Damian because over five or six years we’ve developed a friendship,” she said. “When I was writing the piece, I was up for days. I couldn’t ‘kill’ Damian.  I finally had to call him and get his permission. The first time I saw the piece and he actually fell over, I just drew in a breath… it hurt.”

Invitation to a Die-In
by David Cote and Nkeiru Okoye

And he is always watching, stalking, talking, yelling, telling, choking
My life, my rights!

Hood up, head down, gotta get home.
Just another Black man in the middle of the road.
A man trying to make his way in the world.
Down in the gutter you can see the blood swirl.

What was my crime?
They say give me some time. When was my trial?
They say might take a while.

Don’t confuse my face with your fears.
The Law puts a gun in your hand,
But you are still a man.
Are you blue, or are you, you?
I don’t see Black People or White People.
I just see Blue People and You People.
But you are a symbol of Justice,
And your bullets are real.

Please don’t shoot me.
Sir, I am unarmed!
My life matters.
My life-

Conductor Ng Tian Hui paired the world-premiere performance of Invitation to a Die-In with Okoye’s “Songs of Harriet Tubman,” a collection of four arias from her opera Harriet Tubman: When I Crossed That Line to Freedom.  After experiencing Invitation, you may need to listen to “I Am Harriet Tubman, Free Woman” performed by Louise Toppin and the Dvořák Symphony Orchestra on YouTube to help cure your blues.

In the Age of the Visual Album, What Can Opera Learn from Beyoncé?
Haydn Symphonies
Capturing the Chevalier, One of the Most Remarkable Stories in Classical Music
Playlist: Your Guide to Chopin's Études
How Classically Trained Navajo Pianist & Composer Connor Chee Weaves His Sound
MLK, Mahler, Making Community with the Chicago Sinfonietta