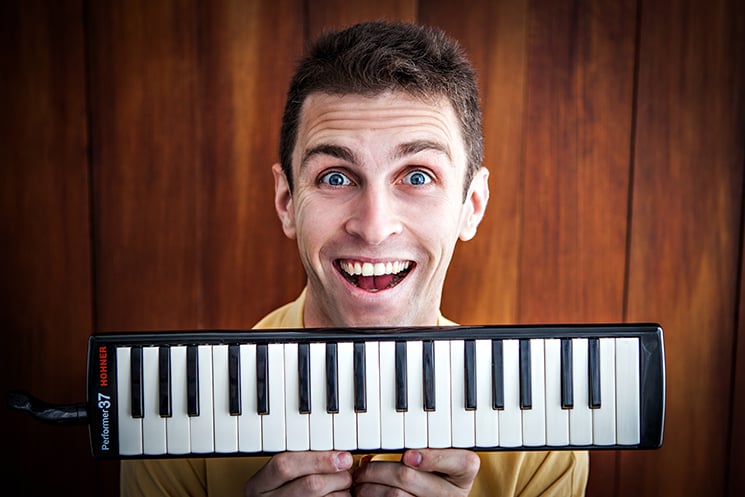 WFMT announcer Robbie Ellis has shared his talents as a comedian and composer as the host of WFMT’s Cabaret series. During the most recent WFMT Cabaret, Ellis revealed his favorite (albeit unconventional) place to pick up a date: the book club. His song, “Book Club,” suggests a few strategies for attracting and impressing a companion who is literarily inclined. Watch below to keep up with the hottest new trends in seduction and feminist literature!

When Ellis, who is originally from New Zealand, first moved to Chicago, he learned that a shot of Malört is a rite of passage for many new arrivals: something that people should try once, but only once. Since he has always written songs locally specific to where he’s living at any given time, he composed “A Shot of Malört” to tell the immigrant’s story from many perspectives.

While Malört is one beverage Ellis has tried for the first time in Chicago, there’s another drink he can’t find anywhere in America – or at least, not made properly. One of Oceania’s favorite espresso beverage is the flat white. In the video below, Ellis not only expresses his concerns about not finding a proper flat white in the States, but he also shares a recipe for its preparation.

70th Anniversary Special: Interview with Almita & Roland Vamos
Decade in Review: The 2010s and Classical Music
'A rose for love and a book forever': Literature for Music Lovers on World Book Day
6 Classical Music and Wine Pairings That Are Sure To Soothe Your Soul
9 Works by Women Writers We Want to See Adapted into Operas
In Their Own Words: Quotes From Artists and Friends of WFMT Who Died in 2020