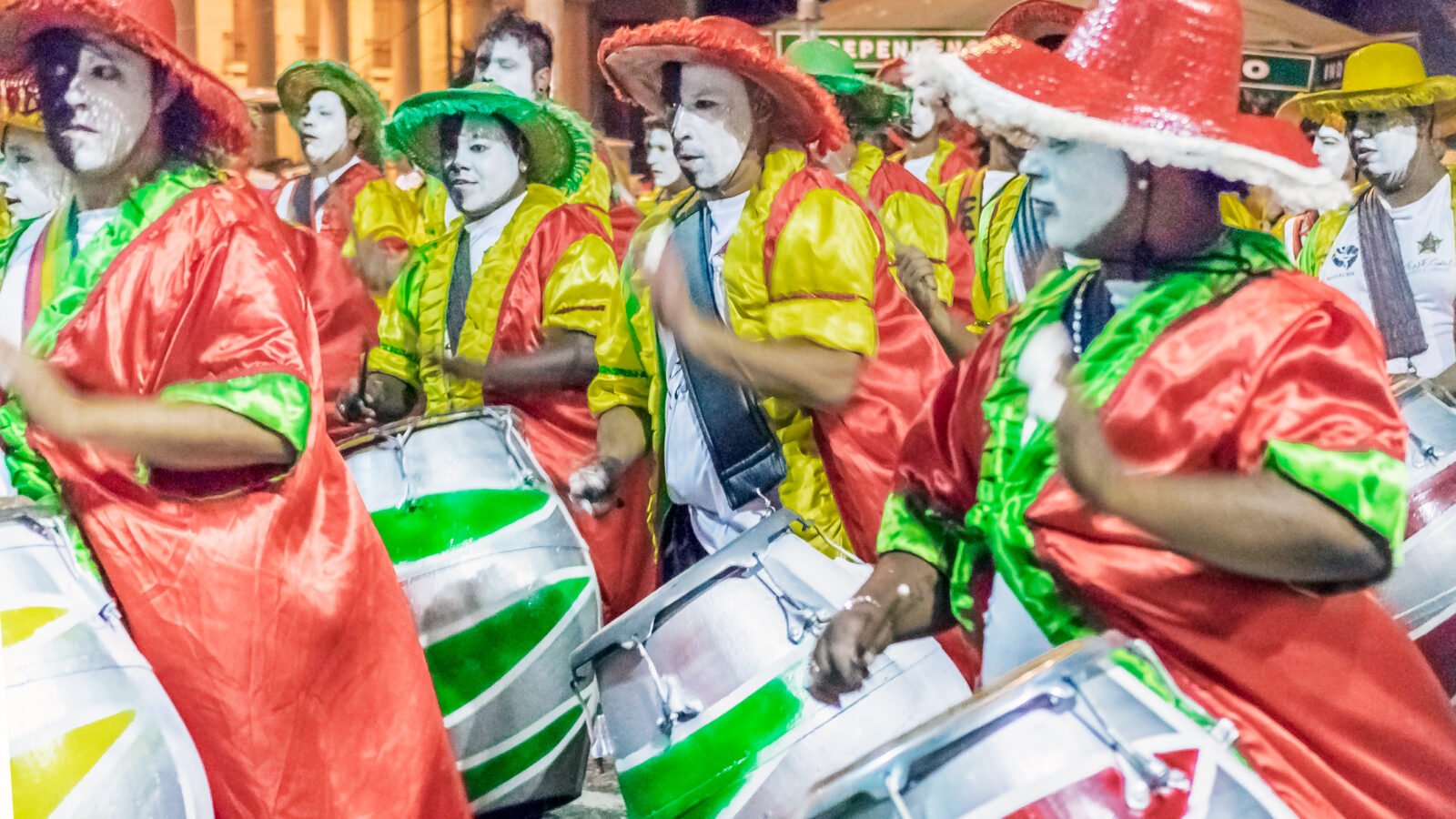 Though Uruguay is one of the least populous countries in South America, every year it hosts the world’s longest Carnaval. Carnaval in Uruguay would not be complete without candombe, an Afro-Uruguayan performance tradition that is centuries old but still celebrated today.

Candombe is rooted in the culture of enslaved peoples who were brought to Uruguay from Africa during the early 1800s. During the 1840s, slavery was abolished in Uruguay, at the same time the region experienced an influx of European immigrants. The term candombe means “pertaining to blacks” in Kikongo, a Bantu language. 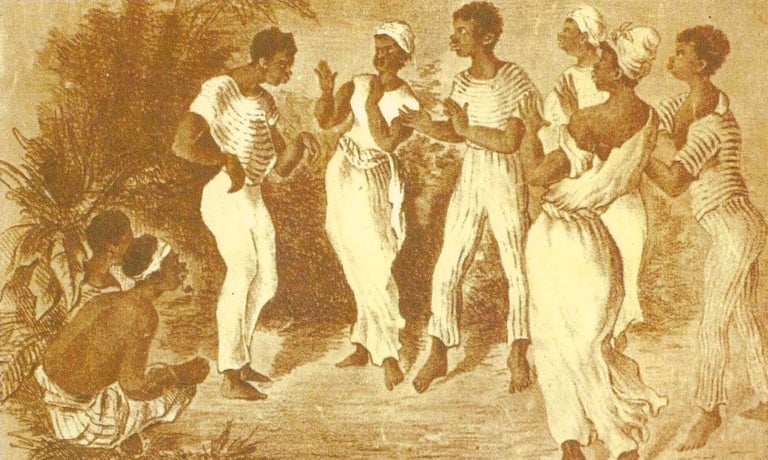 The music of candombe has become one of the most defining features of Uruguayan national culture. Candombe was originally performed only by Afro-Uruguayans. Today, only 12% of Uruguayans identify as having Afro-Uruguayan heritage. However, candombe remains one of the most important cultural traditions in Uruguay, and people of all backgrounds celebrate candombe in the 21st century.

Initially, candombe was performed only by black descendants of slaves, according to George Reid Andrews, author of “Blackness in the White Nation: A History of Afro-Uruguay.”  However, by the early 1900s the performance of candombe began to expand beyond just the Afro-Uruguayan community.

The tamboriles are played “mano y palo,” with one bare hand and a stick in the other. The drum stick is generally used to play the underlying groove of candombe music, the clave rhythm. Much like the traditions of candombe, the clave is one that has been spread to the Latin American diaspora from peoples originally from sub-Saharan Africa.

The skills of playing the tamboriles and the candombe clave rhythms are passed down orally. Though different cultures have different clave rhythms, you can hear (and see!) common clave rhythms used in candombe in a video uploaded by YouTuber Mario Ipuche below.

Candombe can be heard throughout Montevideo every year during Carnaval, which lasts from mid-January to late February. While Brazil’s six-day Carnaval may be the best known, Uruguay’s Carnaval is the longest, lasting up to 40 days.

During Carnaval, groups of drummers fill the streets with their complex beats and colorful costumes. A cuerda, which is a group of at least three drummers, must have at least one performer of each of the three tamboriles. But during Carnaval upwards of 70 performers can be seen playing each type of drum. These large groups come together to form neighborhood comparsas. Comparsas are established groups of drummers that audition and practice throughout the year in preparation for Carnaval, when the comparsas take to the streets dressed in matching costumes.

Many comparsas perform during Carnaval in desfiles de llamadas, or call parades. They are led by someone carrying the estandarte, or standard, the banner that shows the name of the comparsa. They are followed by people carrying banderas – large, colorful flags. They are followed by others carrying trofeos, or trophies, which are symbolic objects that are rooted in the early spiritual traditions of candombe. These symbols are typically two stars and a half-moon, each of which are carried by a separate person. 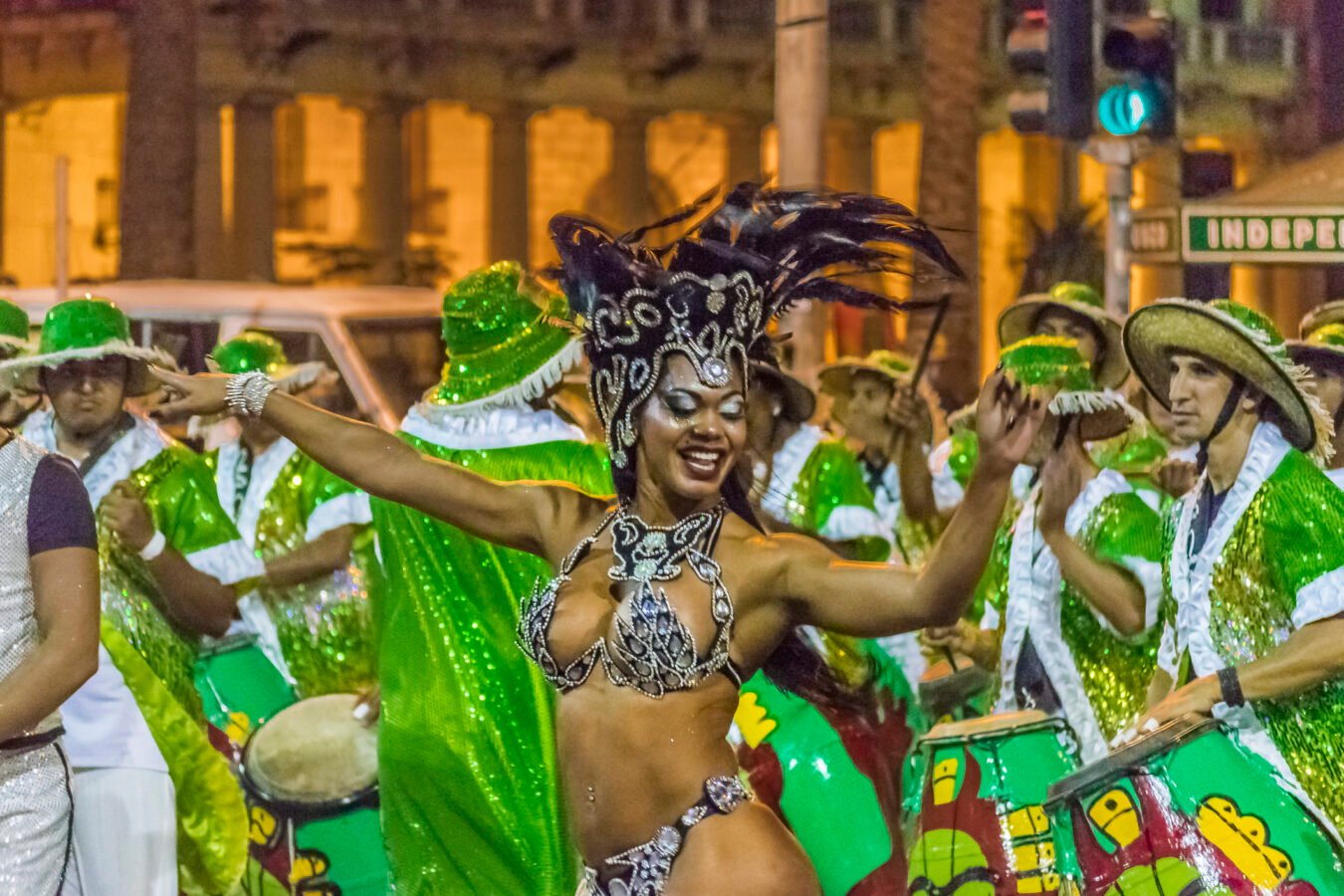 A woman dances with candombe drummers at a carnival parade in Montevideo, Uruguay

The comparsas are followed by the cuerpo de baile, or body of dancers. These dancers are dressed as archetypal characters, including the Mama Vieja, Gramillero, and Escobero. The Mama Vieja, which means old mother in Spanish, is an older woman who typically carries a parasol and fan. She was the matron in the homes of the elite during colonial times and dances along with the Gramillero. The Gramillero is an old medicine man with healing powers, wearing a beard and holding a cane. While the Mama Vieja dances gracefully, fanning herself, the Gramillero wobbles, bent over his cane. The Escobero is a younger athletic man who does acrobatics with a headless broom, meant to dazzle and wow watchers. 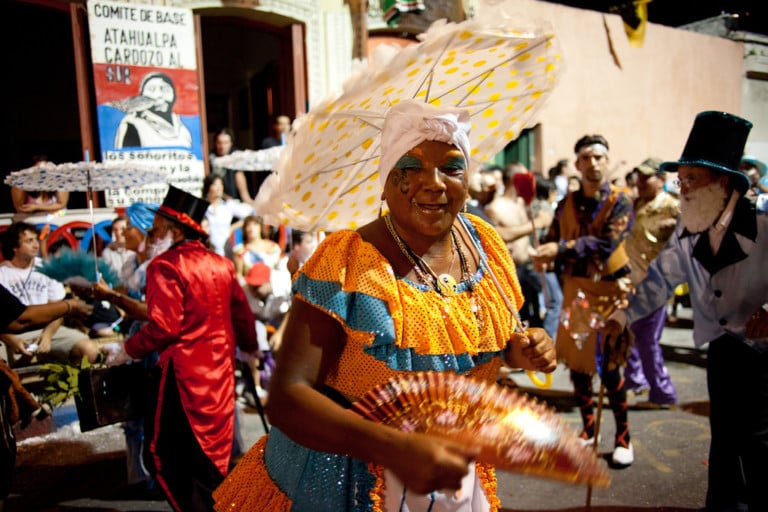 A woman dressed as Mama Vieja, an Afro-Uruguayan archetype, celebrates Carnaval in Uruguay, while men dressed as Gramillero parade behind her (Photo: Jimmy Baikovicius, CC BY-SA 2.0)

Some scholars have made parallels between candombe characters like Mama Vieja, Gramillero, and Escobero and archetypal characters portrayed by American minstrels in the 19th and 20th centuries. One of the foremost American scholars on Afro-Uruguayan history, George Reid Andrews, has described how some candombe celebrations included blackface comparsas during colonial times called lubolos, which means “white painted black.” Andrews also wrote that the Mama Vieja and Gramillero characters were created by the lubolos. However, other scholars believe that these characters were created by enslaved Africans, also called the naciones, or nations, who were brought to Montevideo in the 18th century.

Since its beginnings, Uruguayns have combined candombe with other performance traditions from Latin America and beyond. Along with such musical styles as candombe beat, musicians and composers have fused candombe with samba, cumbia and even classical music. While candombe was originally performed only by a group of drummers joined by dancers, it has evolved into a style that can include instruments from different families as well as singers. 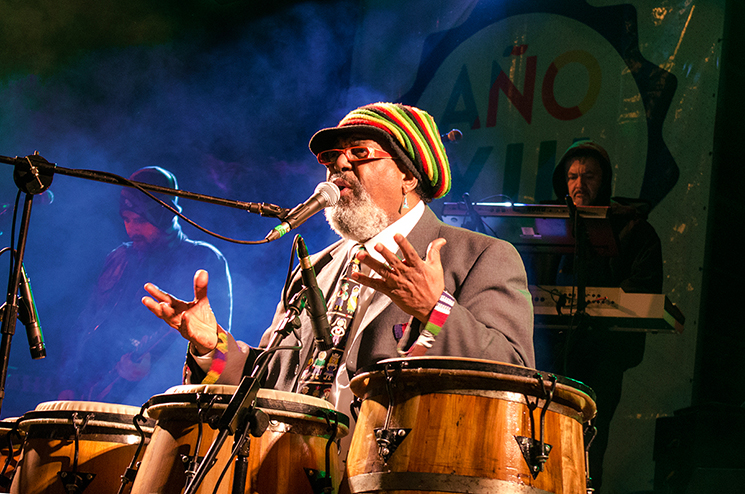 One of the most beloved and popular musicians in Uruguay today is musician and composer Rubén Rada. Rada has fused candombe with various musical styles throughout his long career, bringing this tradition to 21st century listeners around the world. He has composed such songs as “Candombe para Gardel”.