From Mahmoud Ahmed to Tilahun Gesesse, Mulatu Astatke to Getatchew Mekuria, there have been many beloved musicians throughout Ethiopia’s history. However, there is only one that has combined the musical traditions of St. Yared, the father of Ethiopian religious music, with classical piano and the traditional pentatonic scales of Ethiopian music.

Emahoy Tsegué-Maryam Guèbrou is a pianist and singer who has lived much of her life in isolation as a nun. Throughout her life both in and out of Ethiopia, she has never stopped her quest to spread her music and share the power of music education around the world.

In 1923, she was born Yewubdar Gebru in Addis Abeba, the capital of Ethiopia. Many things took Emahoy away from her homeland: at age 6, she was sent to Switzerland to attend a boarding school where she studied violin and piano. At age 10, she gave her first violin recital and returned to Ethiopia to continue her studies at the Empress Menen Secondary School. But in 1937, she and her family members were taken as prisoners of war and deported to Italy. After the war, Yewubdar continued her musical studies in Cairo, Egypt with violinist Alexander Kontorowicz. She finally returned to Ethiopia along with Kontorowicz to serve in the Imperial Body Guard Band under Emperor Haile Selassie.

At age 19, Yewudbar fled Addis Abeba to join the Guishen Maryam Ethiopian Orthodox monastery. She was ordained as a nun at age 21 and took on the title of “Emahoy”, meaning nun, changing her name to Tsegué-Maryam. By the early 1960s, Emahoy lived in the Gondar region of Ethiopia where she studied the music of Ethiopian Orthodox Saint Yared, the father of Ethiopian religious music and chants. In 1967, Emahoy’s first record was released in Germany with the help of Emperor Haile Selassie.

In 1984, she left Ethiopia again to flee the communist Derg regime and went to the Ethiopian Orthodox Patriarchy in Jerusalem. Now at age 94, Emahoy lives in a monastery in Jerusalem but like many other Ethiopians who are expatriated, she still has pride in Ethiopia’s rich culture and history. Symbols and cultural landmarks have outlived the rise and fall of dynasties and regimes in Ethiopia. Emahoy is one of them. 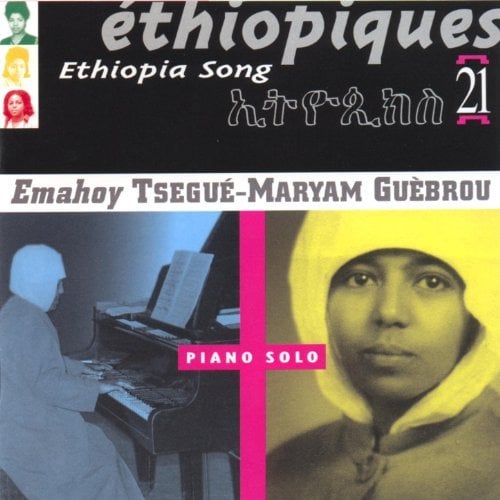 Emahoy’s dedication to the teachings of St. Yared exemplifies the strong presence of the Orthodox Tewahedo Church in Ethiopia. This history of religious traditionalism has influenced many aspects of society and culture in Ethiopia, from the monarchical history of the Solomonic dynasty, to music traditions.

Ethiopian music, religious and secular, has traveled around the world with the help of CD compilations, such as the Éthiopiques series by French record company, Buda Musique. The extensive series takes listeners on an adventure through Ethiopian musical history, highlighting the various pentatonic scales, instruments, and languages. Some artists featured in the series include Ethiopian music legends Alemayehu Eshete and Ayalew Mesfin, among others. In 2006 the label released Volume 21 of the series, dedicated to the music of Emahoy Tsegué-Maryam Guèbrou.

Beyond her volume of Ethiopiques, in recent years an American pianist has launched a project to provide music sheets for Emahoy’s scores. Emahoy has also set up a foundation, the Emahoy Tsgue Maryam Music Foundation, to provide instruments to children who do not otherwise have access to instruments and music education. Watch Emahoy perform a piece in her home in Jerusalem in the video below.