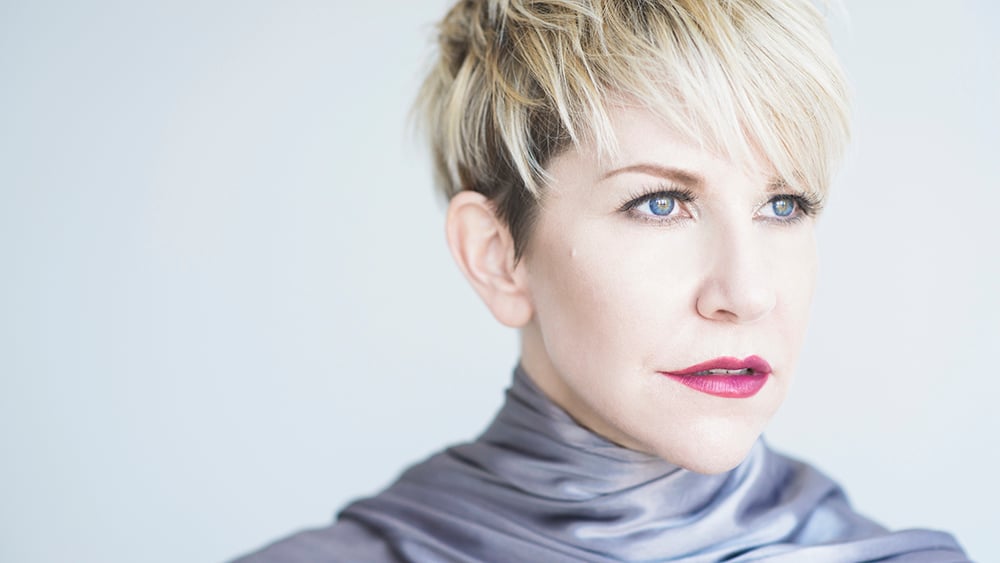 “The arts in our schools today, and in general society, have sort of been pecked away at. I think we’re starting to raise children in our society that don’t have an outlet to express themselves,” mezzo-soprano Joyce DiDonato said. “They don’t have an outlet to go to and try to sort through the thorny issues that they’re feeling when they’re 13, 14, 15, and the world doesn’t make sense to them, and they don’t know where they’re going, and everything is confusing.

“If kids have an artistic outlet, that’s an outlet for them to express violence and uncertainty and joy and tragedy through music, through art, through sculpture. They get, in a therapeutic way, to work through these issues. If you take that away from kids, they’re going to find another way to express themselves and to sort out their place on this planet, and oftentimes it will be a violent one, often it will be against things and angry. We see that in the news. We see that coming to life.

“I’m not saying that art is the only way for a lot of people, but I know statistically, we have the studies the prove it, it is a very effective way to build connected human beings who have a sense of empathy and where they fit into the world. That is a powerful, formative, beautiful thing to give ourselves as a society.”

One study proving the effectiveness of the arts in building strong communities was published in 2009 by the late James S. Catterall. His book Doing Well and Doing Good by Doing Art analyzed data about 25,000 high-school students over four years taken from the National Educational Longitudinal Survey, along with data he collected over 10 additional years through child assessments, interviews with children and parents, and questionnaires administered to students, teachers, and school administrators.

By following students from their teens through their mid-twenties, he determined that young people with an arts-rich background not only achieve higher GPAs and test scores, but are more likely to graduate from high school, participate in extracurricular activities, belong to academic honor societies, attend a four-year college, do volunteer work, read a newspaper once a week, and vote.

Perhaps most significantly, data he has collected illustrates that socioeconomically disadvantaged young people who have intensive arts experiences show achievement at similar rates to the general population, and greater achievement than those of similar socioeconomic backgrounds but little or no involvement in the arts. The study did not consider things like quality of family life, quality of friendships and social relations, and general satisfaction.

Catterall’s findings do not prove a direct cause and effect relationship between being deeply engaged with the arts and academic and civic behavior. But his studies clearly do show that arts can contribute to individual achievement and community building.

But if arts funding is cut more and more, how can young people access the arts in order to achieve more?

DiDonato partnered with Carnegie Hall’s Weill Music Institute and dozens of other artists to bring the arts to young people at a crucial stage in their development: infancy. After asking, “Wouldn’t it be beautiful if every new born child was not only given a lullaby when they leave the hospital, but a personal one from their parents?” The Lullaby Project was born.

The project hopes to strengthen bonds between parents and children, and consequently, between individuals and their communities, by creating original lullabies with pregnant women and mothers of newborns. It began at Jacobi Medical Center in the Bronx in 2011, and since then, hundreds of original lullabies have been composed directly with mothers for their children.

“I’m the sixth of seven kids. My musical memories are more with my father than with my mom,” she said. “My dad had a lullaby – I’m pretty sure he sang it to all seven of us, but I call it mine (obviously!). ‘Goodnight little girl, goodnight little one, may God bless you tonight.’ It’s just really simple. And it’s so funny, now that I’m singing it I realize he didn’t even call me by name in it because he had such a hard time keeping his kids’ names straight.”

“But I remember it very fondly and was as if time stood still for those 20 seconds before I went to sleep. It was my one-on-one time with my dad when he was pulled in a million different directions in the course of the day, and it really was a bonding element in my life. To this day, he hasn’t sung it to me for 40 years, but it’s ingrained in my memory.”

Perhaps one of the reasons lullabies stick with us for so long is that “subconsciously, there’s something that’s very powerful to a child. They know it’s the mother or father singing one song to them. It feels as if it gives them a place in the universe. There’s a security about it,” she said. Lullabies are often sung during intimate moments, often when parents are in physical contact with their child. So, in some instances, lullabies literally sing directly to our hearts.

“It’s very rare that I listen to my own recordings,” DiDonato confessed. “I do an edit and I highlight all my mistakes and I try to get them fixed, but often I don’t go back just to listen. But this was a rare exception for me because it is such a mixture and a joyful, hopeful rendering of new music done by really extraordinary artists.”

DiDonato is featured in three songs titled “Peace,” “Hopes and Dreams,” and “Dream Big.” Working alongside families for this project and young people throughout her career has also helped her maintain hope and continue to dream big.

“I encounter a lot of young singers and they have dreams of having the career that I have or others have. Very few of them will statistically. It’s a difficult mountain they’re trying to climb. But I know whether they make it to the top of their career or not, every single one of them is going to touch people’s lives through music, often through unexpected ways and in unexpected encounters. When I go out and I see kids making this courageous, difficult trek to make a life as an artist, I’m filled with hope because I see that as an answer to so many things in our world today.

“I’m very lucky that my life is surrounded by music because it’s not just pretty melodies that sort of numb me to the world around me,” she continued. “I deal with historical legacies, centuries old. I’m doing a project about war and peace, and I’m singing music that was written three and four centuries ago. Through song, I actually relive the cyclic nature of humanity going from war to peace. We get bored with peace, we get insecure with peace, so we seek out war again.

“Another reason I’m a huge advocate for the arts is that we become real students of history, and of our place within society. If you can step back and turn off the television, put away the newspaper, and zoom out, you can start to see we’re just in the cycle of what humanity does.”

DiDonato hopes that The Lullaby Project can, in its own way, help humanity learn better from the past, even if we can’t completely break from the cycles it is in. “There is optimism when the child hears their mother say, ‘I want the world for you. I have so many hopes and dreams for you. I love you.’ That child is going to have a more secure sense of where they fit into the world. They’re going to be less afraid when they step out into it. If we can build children that aren’t so afraid of everything, they’re going to walk out and they’re going to contribute to the world to a secure, calm, place full of self-esteem, bringing their best selves into the world. I know that sounds sort of Pollyanna and it sounds simplistic, but I really don’t think it is. I think when you have a child who knows who they are, and knows who they are in the context of the planet, they’re going to go out and contribute positively to the world. That gives me hope, 100%.”