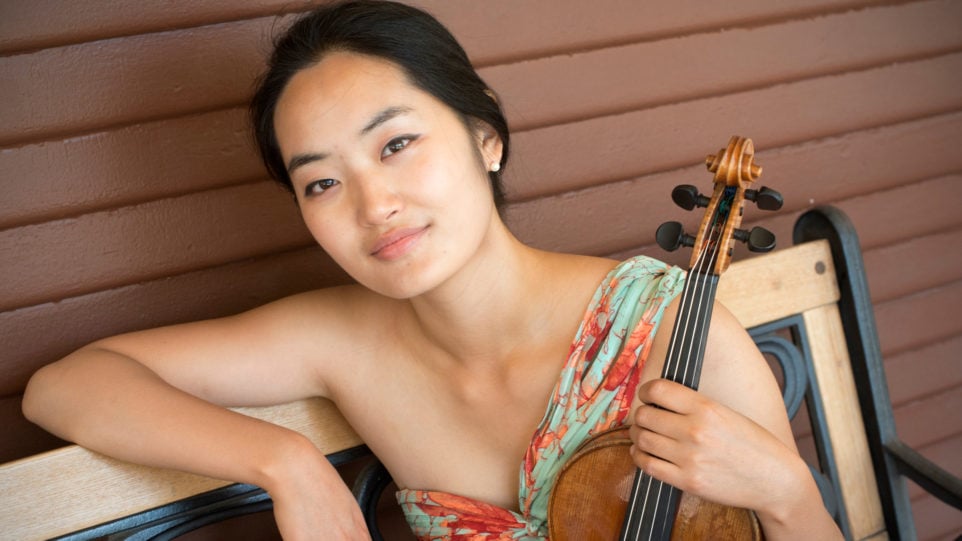 Having earned her Bachelor’s and a Master’s degree in violin performance from the Seoul National University, YuEun Kim graduated from her Artist Diploma, as a Starling Fellow on full scholarship at the USC-Thornton School of Music, under the violinist Midori Goto. Since moving to Los Angeles in the fall of 2013, she has won first place in USC’s Solo Bach Competition and Strings Concerto Competition, and was a semi-finalist at the Qingdao International Violin Competition and the Michael Hill International Violin Competition.

YuEun’s biggest passion is chamber music, She is a founding member of the Zaffre String Quartet and has performed at chamber music festivals around the country including the Perlman Music Program, Yellow Barn, Banff, Four Seasons Chamber Music Festival and collaborated with distinguished artists such as Ida Kavafian, Colin Carr, Roger Tapping and Steven Tenenbom. YuEun has appeared as a soloist with the USC Symphony Orchestra and Symphony Irvine. She has recently won auditions for Beverly Hills National Audition and Sundays Live at LACMA, and became an artist at Classics Alive management.

In 2017, YuEun undertook a big project, performing Beethoven’s complete violin sonatas in three concerts over the space of three weeks with great success in Los Angeles.

EunAe Lee, from Seoul, Korea, is a prizewinner of the Bösendorfer USASU International Piano Competition, the Hilton Head International Piano Competition and the Juilliard Concerto Competition. She also received the Bärenreiter Urtext Prize and the Alice Rosnet Prize for her interpretation of Béla Bartók in the ARD International Music Competition in Munich, where she performed with the Bavarian Radio Symphony Orchestra. EunAe was featured as a soloist on the Dame Myra Hess Memorial Concert Series and the Pianoforte Salon Series, and both were broadcasted live on WFMT 98.7 FM. She was also featured on Radio Classical 89.1 & 89.5 FM and was interviewed by the host Steven Kapp Perry. Performance highlights include solo and chamber appearances in Lincoln Center’s Alice Tully Hall, the Peter Jay Sharp Theatre, Kennedy Center’s Millennium Stage, and Merkin Hall, amongst others. EunAe enrolled in the five-year accelerated Bachelor’s and Master’s degree program at the Juilliard School, studying with Martin Canin. She went on to study with renowned pianist Richard Goode at the Mannes College for Music and garnered her Artist diploma. Currently, EunAe is a doctoral candidate at Northwestern University under James Giles.