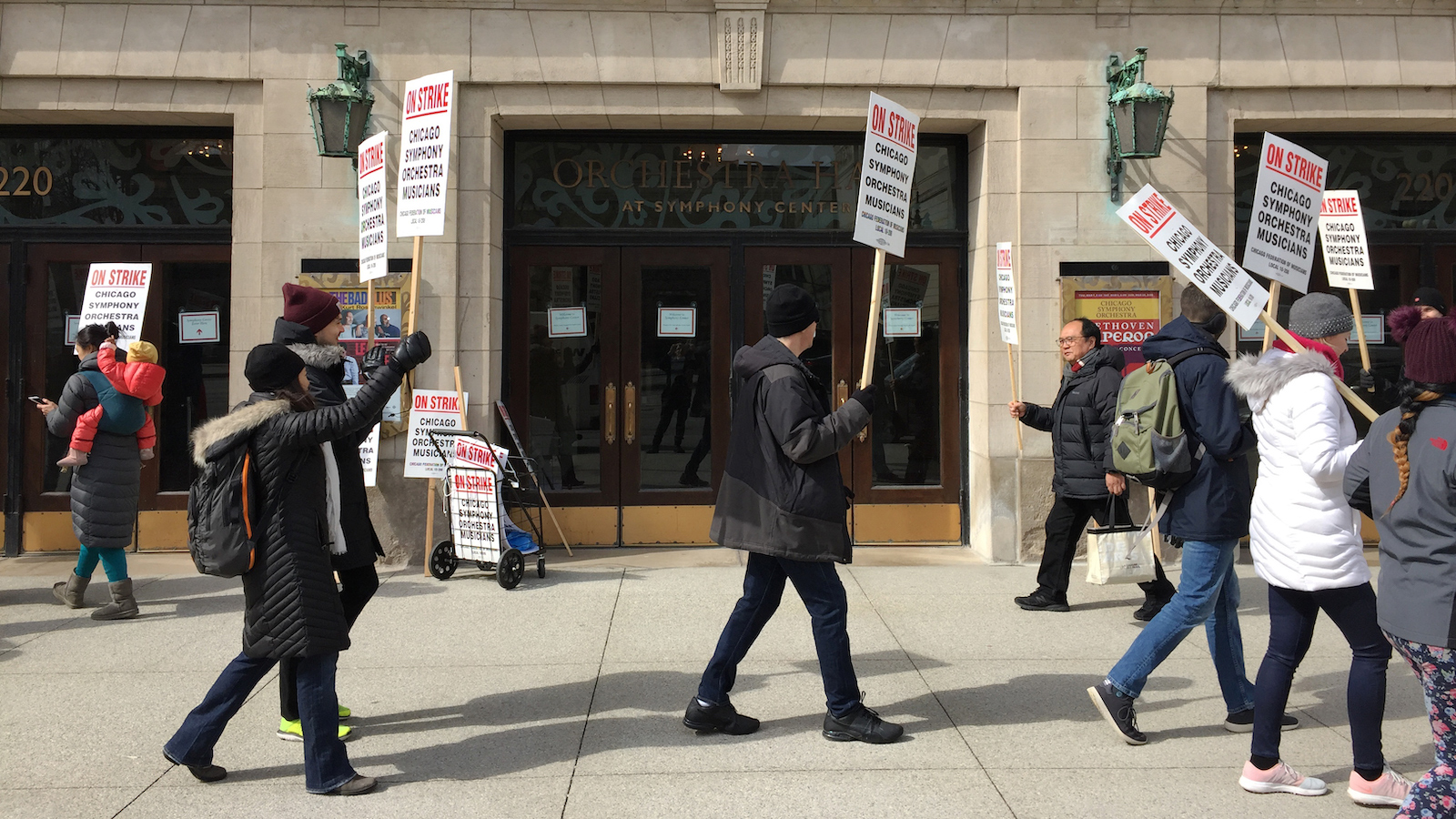 Picketing began yesterday on the sidewalks outside the entrances to Symphony Center in the Loop, as the musicians of the Chicago Symphony Orchestra marched off their first full day on strike.

Wielding signs reading “On Strike — Chicago Symphony Orchestra Musicians — Chicago Federation of Musicians Local 10-208,” musicians paced off a line in front of the doors between 8 a.m. and 8 p.m., taking four-hour shifts and pledging to do so every day until the dispute is settled. “Twenty-four/seven — well, twelve/seven,” said Steve Lester, a CSO bassist and the chair of the negotiating committee for the musicians’ union.

Still at issue after 11 months of negotiation are the rate of increase for musicians’ base pay and the form retirement benefits will take.

Musicians argue that their standing as what many consider the finest American orchestra ought to dictate the nation’s highest pay. The Chicago Symphony Orchestra Association contends that the higher base pay for the orchestras of Los Angeles and San Francisco nevertheless has lesser purchasing power because of the higher cost of living in California.

The knotty problem of retirement benefits stems from the CSOA’s desire to transition from a defined-benefit plan to a direct-contribution plan. Lester contends the existing defined-benefit plan, a pension in which retired musicians are paid a guaranteed amount, contributes significantly to the CSO’s ability to attract and retain top talent. “When people come to this orchestra, they stay,” he said. “That guaranteed benefit is absolutely crucial to keeping this orchestra intact.”

On a conference call yesterday afternoon, CSOA President Jeff Alexander stated that the association and the board of trustees do not consider the current defined-benefit pension plan sustainable. “The cost has become extraordinarily high,” he said, “and projections for the future have the cost going higher and higher.” The association’s current proposal offers pay higher than the wages, even without cost-of-living adjustment, of all the traditional Big Five orchestras of New York, Boston, Philadelphia, and Cleveland. It also offers the orchestra’s current roster all the benefits already accrued through their tenure under the defined-benefit plan, in addition to the benefits that would accrue under a new contract’s direct-contribution plan.

Alexander said the parties are zeroing in on resuming discussions on pensions on Friday, though the association stands ready to come to the table at any time. The day before that, Thursday, marks the next scheduled subscription concert, when, if the show goes on, Riccardo Muti, the CSO’s music director, will lead a program including Beethoven’s Symphony No. 2 and Wagner’s Tannhäuser Overture.

“As long as the strike is on, all activities are canceled,” Alexander said.

Gina DiBello, a CSO violinist, finds herself back on the picket line, having undergone the 2012-14 labor dispute while a member of the Minnesota Orchestra. “It is extremely disappointing,” she said of the work stoppage. “The musicians deserve better. The city of Chicago deserves better.”

70th Anniversary Special: Interview with Almita & Roland Vamos
Working for a Living — 5 Studs Terkel Conversations for Labor Day
CSO Musicians Call for Continued Negotiations Amid Ongoing Strike
Chicago Symphony musicians on strike after talks break down
Chicago Symphony Orchestra musicians authorize strike for March 10 over new contract
In Their Own Words: Quotes From Artists and Friends of WFMT Who Died in 2020