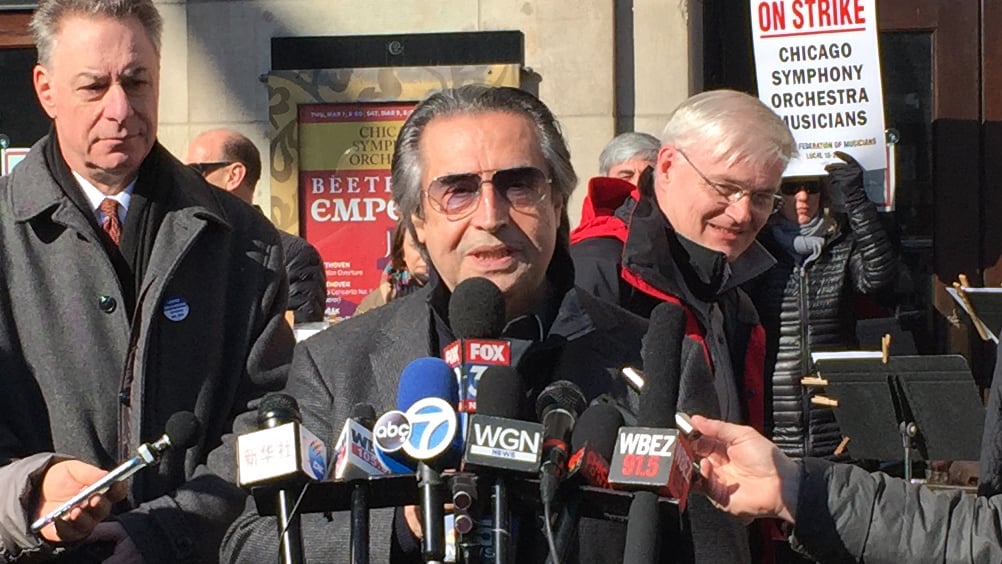 “I am here with my musicians, proud of my musicians,” he said, following remarks from CSO bassist and negotiating committee chair Steve Lester and Chicago Federation of Musicians president Terryl Jares. Muti’s presence made a strong and atypical pro-musicians statement. Usually caught in a neither-nor position straddling the artistic and administrative halves of the organizations, music directors have historically stayed out of labor disputes in major orchestras.

The event took place at the time when Muti and the orchestra would have rehearsed in Orchestra Hall for the upcoming weekend’s subscription programs. In a separate Tuesday release, the Chicago Symphony Orchestra Association announced all Symphony Center concerts through Saturday, March 16, including the subscription programs, have been canceled.

“Here in this building, we don’t entertain people,” Muti said. “We are not entertainers. Music is not entertainment: It is culture. It is sacrifice. It is evolution of the mind and the heart. And this makes this orchestra really a treasure that is priceless.” He ended his remarks here, the word “priceless” floating in the air.

Elsewhere in his speech, Muti expanded the scope of the labor dispute beyond the standoff between the musicians and the Chicago Symphony Orchestra Association to include art-making everywhere, saying that undervaluing the CSO would echo throughout orchestras everywhere, lowering the societal value of music. “The whole musical world is listening to what happens in Chicago,” he said.

Muti frequently asserts that the CSO ranks as one of the world’s three best orchestras, along with the Berlin and Vienna Philharmonics.

The event was bookended by the CSO’s legendary brass section playing “The People’s House,” a John Williams composition from the movie Lincoln, and Paul Dukas’ Fanfare to precede the ballet La Péri.

Muti’s appearance underscored his previous show of support for the musicians’ position in the labor dispute in a March 6 letter to the association president, Jeff Alexander, and the chair of the board of trustees, Helen Zell, as the strike deadline bore down. The strike began at 11:59 p.m. on Sunday, when the contract extension expired.

“I am with the musicians,” Muti proclaimed in the letter. He reminded the board that the orchestra performs not a job but a mission, and called for “tranquility and serenity … for the artists to do their work.”

At the event Tuesday morning, Muti made gestures to align his position with art and its place the world, rather than in total solidarity with the musicians. He clarified that his statement that he was for the musicians did not mean he was against the association.

A statement from the association ascribed to Muti also stopped short of siding wholly with the musicians, saying “I am not participating in the picket line.” And indeed, Muti did not carry a sign and march at the morning’s event. The same statement, however, added, “I intend my position not to be neutral.”