Crickets are the continuo during summers in south central Montana. Their constant hum punctuates the footsteps of the Beartooth Mountains, where rolling hills and rocky peaks blend with the endless sky, and the weather is a fantastic brew of elements. This terrain, dating back millions of years, provides a canvas for many art forms.

Located on 12,000 acres in Fishtail, Montana (about an hour southwest of Billings), Tippet Rise Art Center was founded by Peter and Cathy Halstead in 2016. Establishing an art center and summer festival that would combine music, sculpture, poetry, and nature, was a lifelong dream for the Halsteads, who are both artists. After years of exploring locations around Europe and the United States, Peter Halstead immediately felt a connection to the land.

“There was nothing. Just rolling hills, with sage, with waving wheat,” Halstead recounts. “I said, ‘Wow, I discovered the frontier!’ I felt liberated here. I called Cathy and said, ‘You have to come up and see this because I think I found it.’” 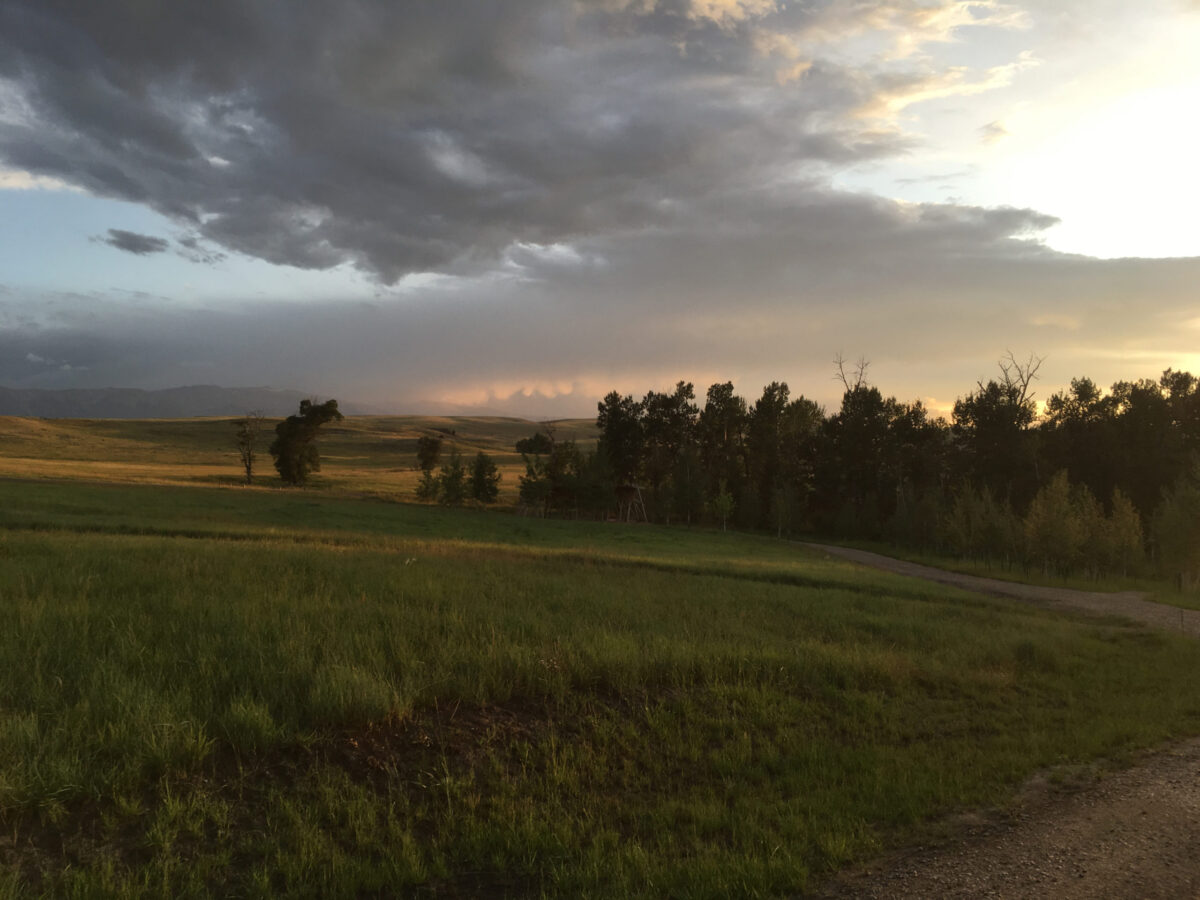 “It was beyond what we thought was possible,” Cathy Halstead states. “As you travel through, [the land] just grows, and you feel that we really are a part of nature, which we forget all the time… There are so many corners of the land that we still don’t know.”

The evocative landscape of Tippet Rise provides a striking complement for classical music. For artistic advisor and pianist Pedja Muzijevic, the dialogue between nature and music anchors the chamber music series, the cornerstone of the art center’s summer programming.

All chamber concerts are exactly one hour, something that Muzijevic is a “huge fan of...sit down, perform for me, and let me go! [Laughs] You then have it in you to want to hear another concert.” And with a lottery system for $10 tickets (and free for those 21 and under), performances consistently sell out.

On a given weekend, one could hear a concert with music by Georg Philipp Telemann and Steve Reich; the next, music by Johann Sebastian Bach and Luciano Berio. Concerts might also include poetry readings and musical meditations. Artists from around the world perform at Tippet Rise, with rising stars in classical music often headlining the summer festival. Most concerts take place in the Olivier Music Barn, an intimate venue that also boasts a state-of-the-art recording studio. 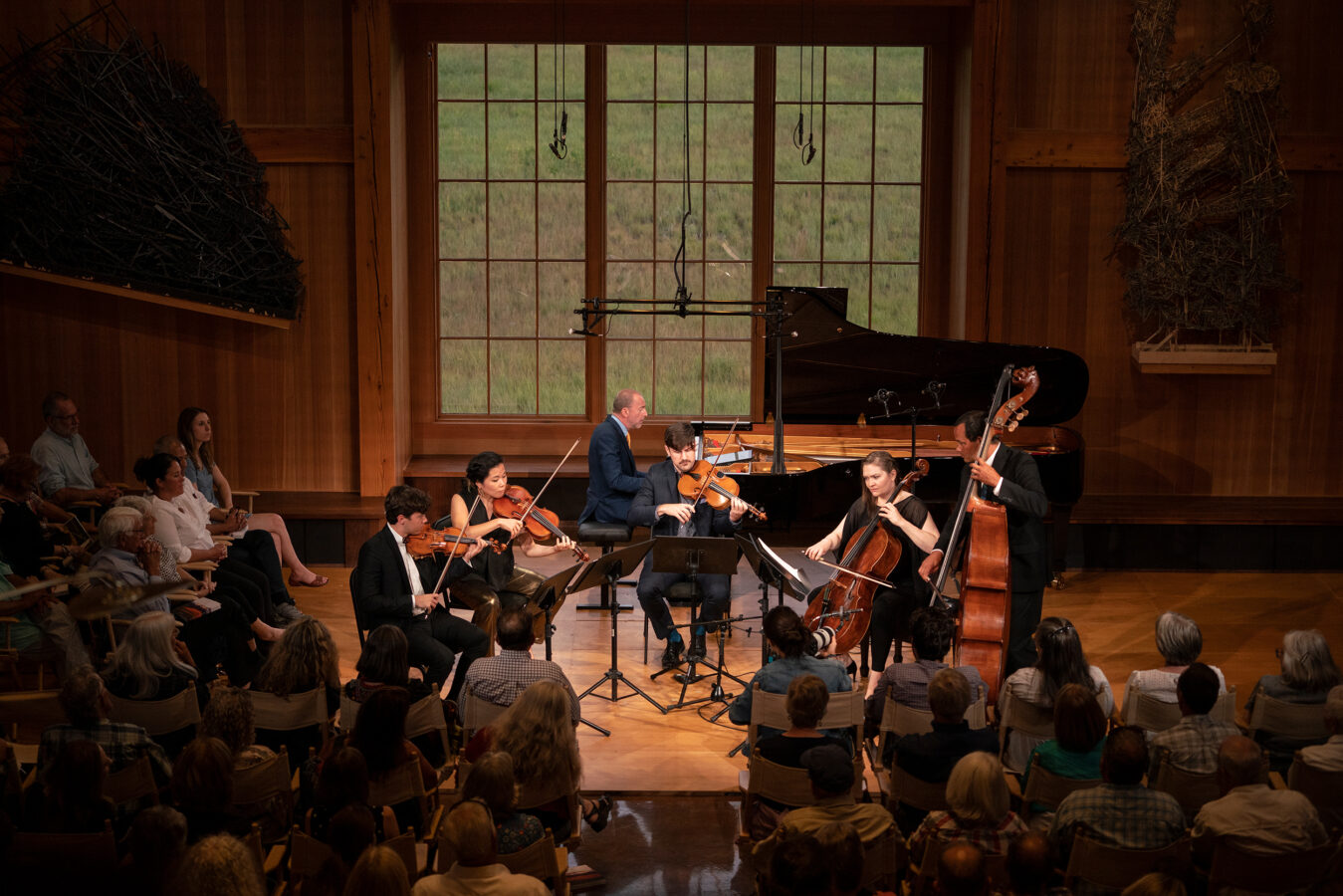 Audiences are exactly eye-level with the artists in the barn, something that Tippet Rise strives for: to break down barriers in performance. This idea goes beyond the walls of the concert hall and into nature. Unique sculptures are spread throughout the art center (they can be toured via van, bicycle, or on foot), and they also host performances.

One example is Domo, by the Spanish-based Ensamble Studio. “When you look at Domo, which is a manmade sculpture, you could easily mistake it for a rock from afar,” Muzijevic observes. “Where does it stop and where does it start? And then you turn a corner, and there’s cattle! To me, that’s the ideological and substantive description of what this place is. It really ties you to what this land was, is, and will be.” 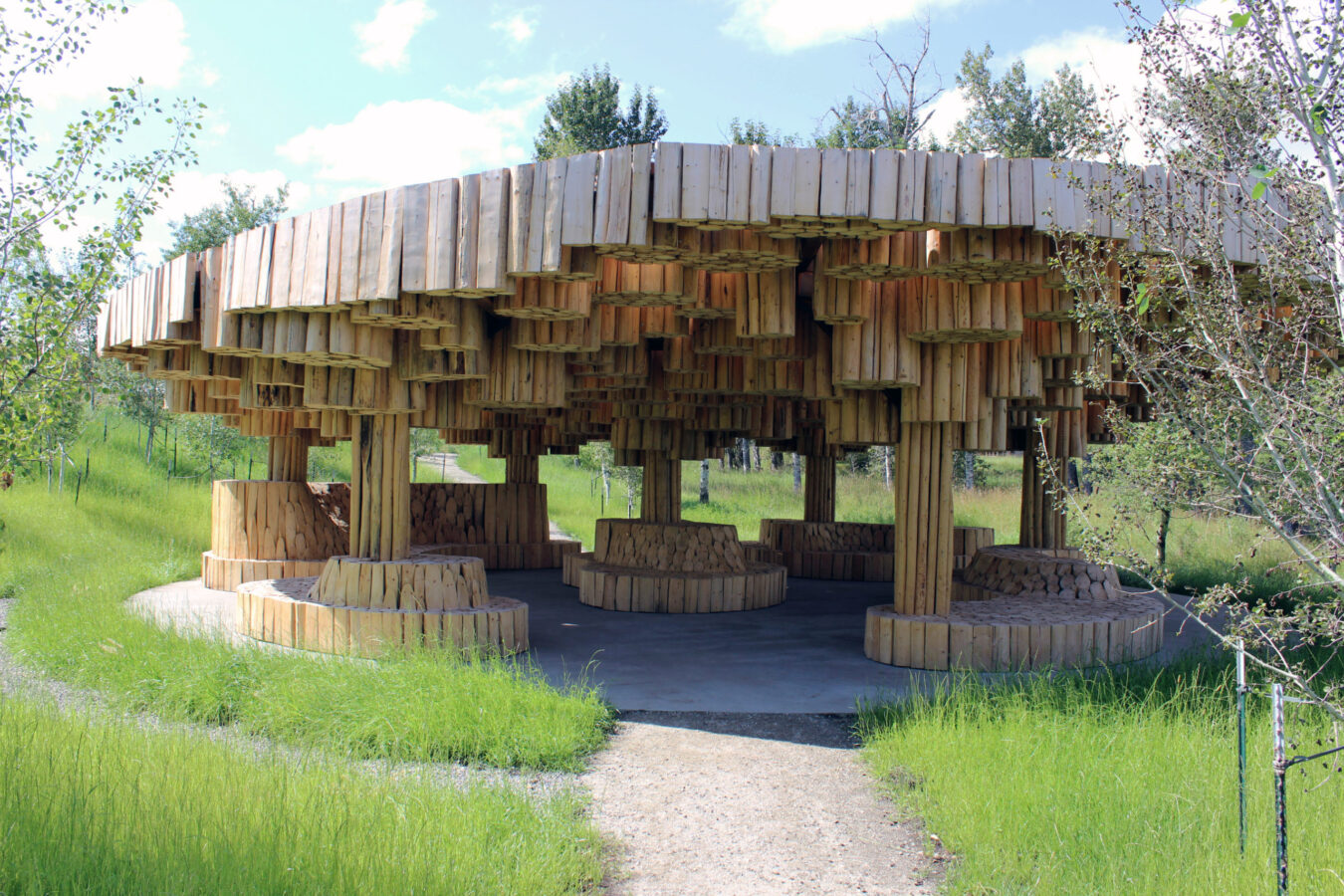 Francis Kéré’s Xylem, which opened this past summer, is another venue that also provides a gathering and resting place for visitors. With its soothing contours made of locally and sustainably sourced ponderosa and lodgepole pine, the pavilion features popup performances.

The vast landscape was even the basis for a piece of music — Lines Made by Walking (String Quartet No. 5) by John Luther Adams. This Tippet Rise commission was premiered by the JACK Quartet in summer 2019 and was inspired by the composer’s walks throughout the art center. 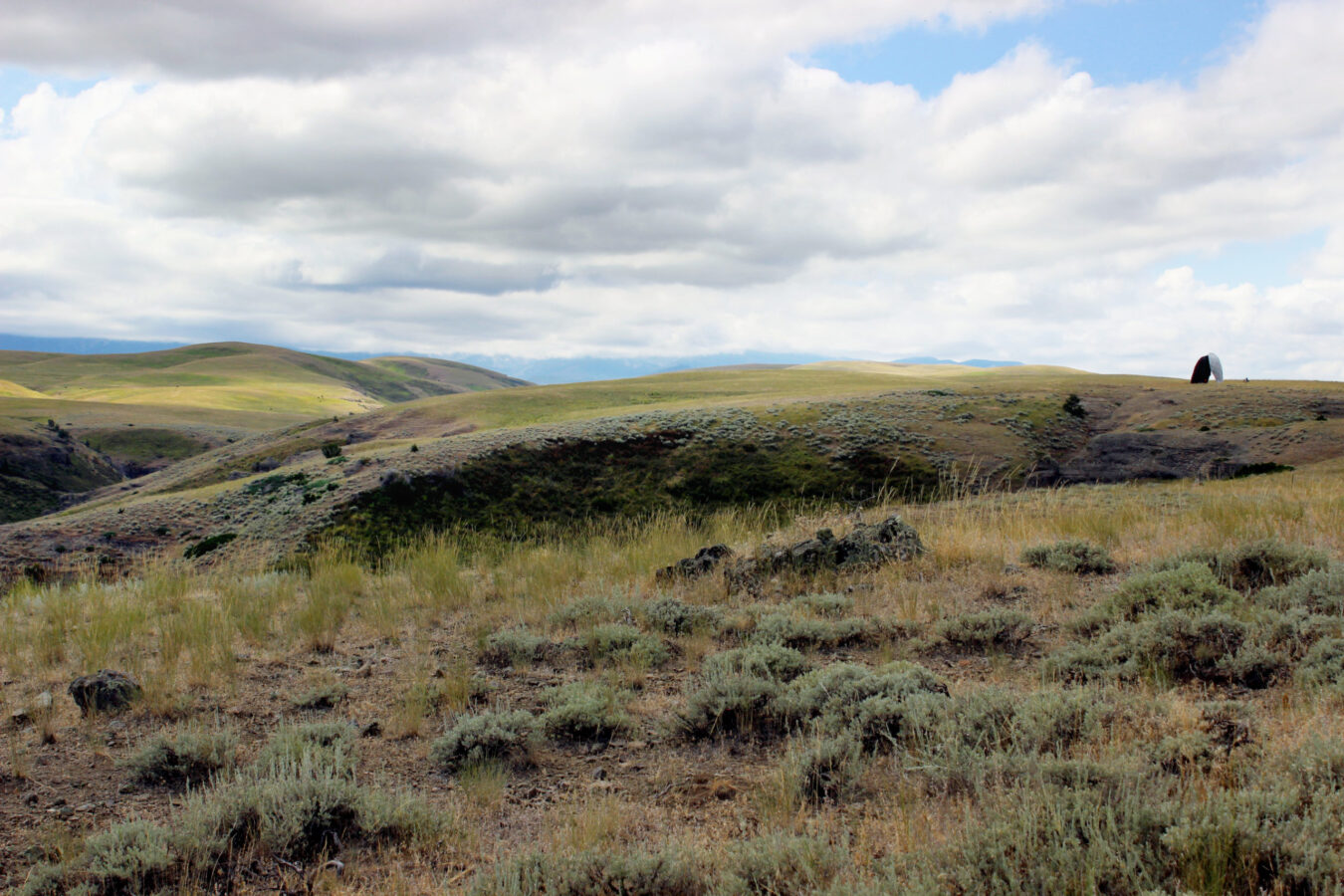 The Beartooth Portal by Ensamble Studio

Combining art and nature at Tippet Rise is ultimately a metaphor, Peter Halstead expresses. “[The poet] Baudelaire said that nature is a forest of metaphor, where the symbols of words, scents, and colors become flesh,” he paraphrases. “Pieces [of music] mean things beyond the notes on the page. They mean things to the people [who] listen to the music here because of the land... Here, you’re not anxious [or] worried about contemporary civilization. [Tippet Rise] is a bridge between different things in your life, and when you leave, you will be healed.” 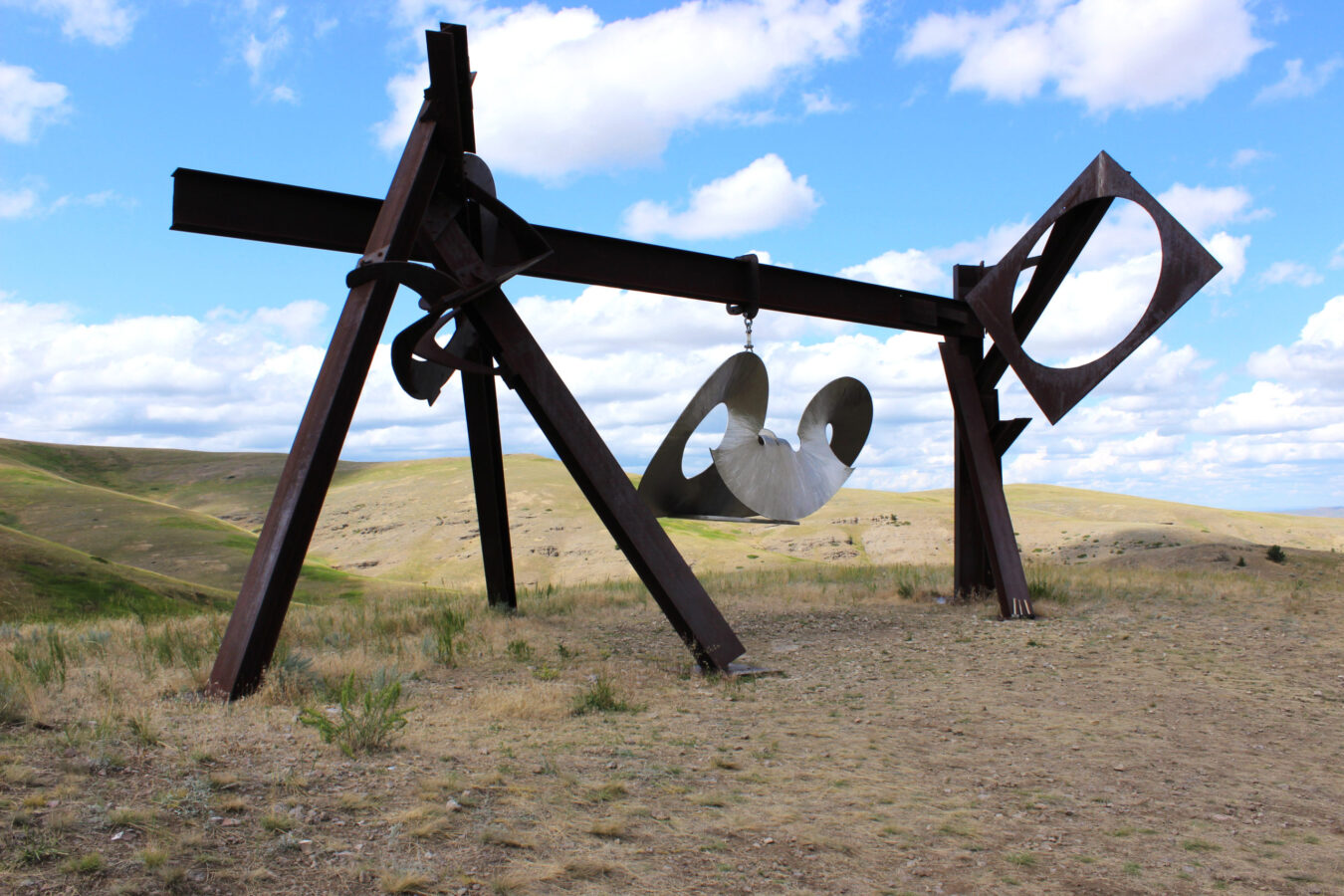