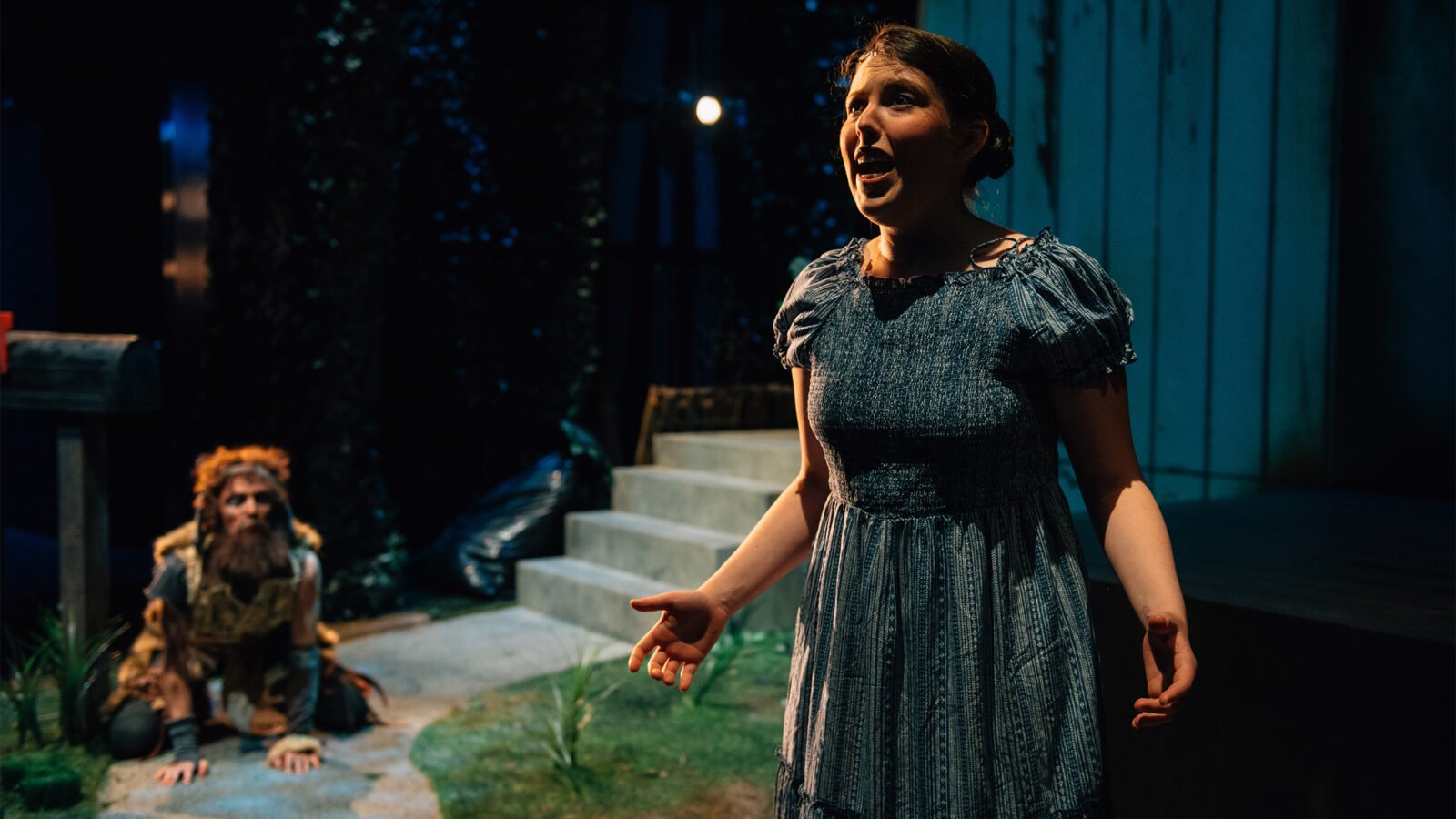 “It has been said that a society can be judged by the way it treats its animals,” composer David T. Little says in the program notes for his chamber opera, Dog Days. He continues, “It also stands to reason that you can tell a lot about a person by how long they can remain truly human during the most traumatic of times.”

Told mainly through the eyes of 13-year-old Lisa, Dog Days, based on a short story by Judy Budnitz, is set in a war-torn future that’s not too far away from our own time. A family grapples with a crumbling world and their impending starvation. Lisa witnesses the slow destruction of her father, mother, and two brothers. And then she meets Prince, a man in a dog suit. Lisa’s father refuses to accept Prince for who he is. Is Prince a symbol of escape or clarity? Do our societal roles matter at the end of civilization? Little’s kinetic score, complemented by a sharp libretto by Royce Vavrek, delves into these intense questions. Initially commissioned by Carnegie Hall as a series of scenes, the opera was premiered at Montclair State University in 2012. Now, Dog Days is receiving its Chicago-area premiere, presented by Northwestern University Bienen School of Music’s Contemporary Music Ensemble and Opera Theater. Joachim Schamberger directs, with musical direction by Alan Pierson, who conducted the first production of Dog Days.

During his residency at Northwestern, composer Little talked with WFMT about developing this dystopian story into a staged opera, the relevant themes that Dog Days addresses, and his advice for young artists.

WFMT: How did you start composing?

David T. Little: Becoming a composer was through film music and one very specific film: [Tim Burton’s] The Nightmare Before Christmas, which I saw when I was fifteen. I was a drummer and grew up steeped in heavy metal but also musical theater. So I had these very different musical lives, and the [Nightmare] soundtrack by Danny Elfman really brought those [genres] together in an interesting way… I said, “I want that job.” 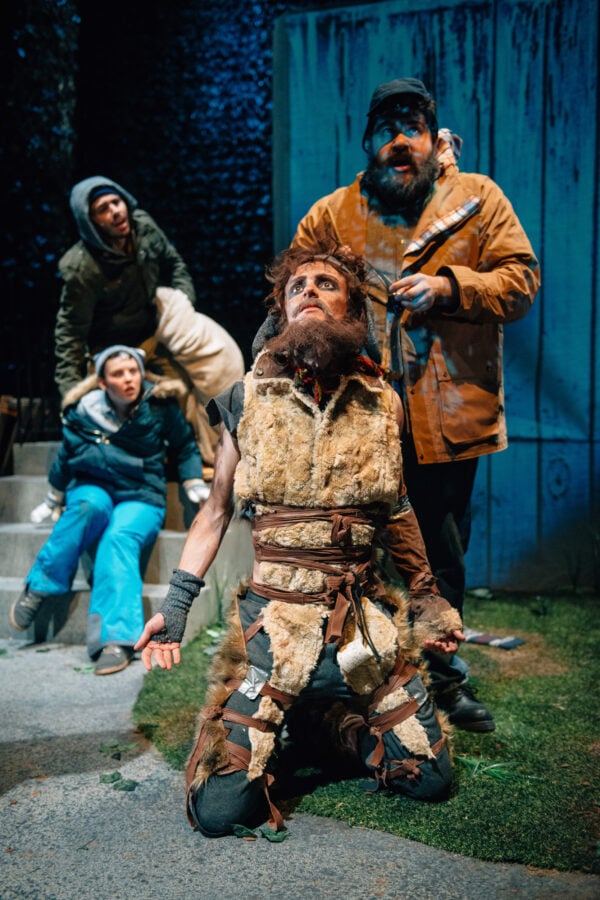 WFMT: Take us to that moment when you first encountered the story of Dog Days and decided to compose an opera.

Little: Dog Days itself has a long and interesting journey. I first encountered the story in a film version by Ellie Lee. I was a student at the University of Michigan, and I used to get up in the morning to start working. I would put the previous night’s Daily Show on and have it on in the background. When that would end, I would shift over to IFC… If I needed to distract myself, I would glance up at it. One of those moments glancing up, I saw this very striking black and white film with this man in a dog costume.

I [eventually] wrote an early piece called Songs of Love, Death, Friends and Government, and there’s a song in there called “After a Film by Ellie Lee,” which is based on text that I wrote about Dog Days. I wrote this when I was living in Boston and studying with [composer] Osvaldo Golijov. He, in one of our lessons, said, “These songs are interesting, they’re like these little studies for operas.”

That was really the first time that I thought about maybe writing opera or what that could mean for me. It was not a form that I could ever really, before that point, connect to… I eventually encountered Wozzeck [by Alban Berg] and Peter Grimes [by Benjamin Britten]. Those are the two pieces that really got me hooked. I wasn’t really interested in exploring things that say, maybe the Mozart operas were exploring. But Wozzeck felt very contemporary and very much the kind of opera that someone who grew up listening to Napalm Death would relate to.

WFMT: How did you create the sound world of Dog Days?

Little: I knew, based on the instrumentation, it would be for my ensemble, Newspeak. We have percussion, electric guitar, violin, cello, and we added viola and bass through this project. Clarinet plays a huge role in this piece, and piano doubling on synthesizer, plus an electronics component. I wanted to take this ensemble and make it sound twice as big. There are only nine players, but it sounds a lot larger because of certain tricks, like guitar peddles and doublings.

Electricity plays a big part in how I think about the sound world, partially because it is a thing [the characters] lose. [The score] really draws on sounds from industrial music but through the prism of classical music. Noise is present, and at the same time, really beautiful vocal music.

WFMT: In a preview video for this production, the Northwestern musicians talk about the themes in this work. Toxic masculinity was addressed, something that perhaps as a society we were not talking about as openly in 2012 when Dog Days premiered. Were you thinking about these themes?

Little: Toxic masculinity was definitely something we were thinking about. We maybe weren’t calling it that in 2012 necessarily, but [Dog Days is] definitely about the way that the roles we play in society and [how] our insistence of playing those roles can ultimately undermine us in very serious ways. This comes from Judy [Budnitz]’s original story.

The father insists on being this literal patriarch whose word is law, and he ultimately destroys everything… It’s also an allegory for a larger, societal tendency or potential for bad things. There’s also this self-destruction that happens… And it’s ultimately [his] undoing as well as the undoing of everyone else. The male characters in this piece don’t fare especially well.

WFMT: In your Northwestern residency, what are some career lessons that you impart to the students, perhaps to a young composer or singer?

Little: Being a composer is a hustle – finding the way that the hustle can work for you and knowing to what degree: completely freelance or teaching or performing? The question is to find what that composite is for each individual person. If there is something that I would encourage young artists to do, I would encourage them to be honest with themselves. The idea that you’re not doing this or that to live an artistic life is just wrong.

As a young singer, being versed in new music can only help you. I think there’s an opportunity to tell contemporary stories that relate to our lives now in a more direct way than perhaps some of the older rep. We were also joking that there are more meter changes in [Dog Days] than Puccini – having to do that work and count those bars will prepare you for broader employment possibilities but also deeper and more artistic opportunities.

Remaining performances of Dog Days take place Friday, November 22 and Saturday, November 23 at 8:30 pm and Sunday, November 24 at 3:00 pm at the Ryan Opera Theater at Northwestern University in Evanston. For more information, visit the Bienen School of Music website.

In the Age of the Visual Album, What Can Opera Learn from Beyoncé?
Earth Day 2020: Stacy Garrop's 'Terra Nostra'
Ryan McKinny on His Friendship, Artistic Partnership With a Death Row Inmate: 'We’re Human Just Like Him'
'The reach is exponentially larger': How Kamala Sankaram Brings New Audiences, Stories to Opera
Sing Different: Why the Life of Apple's Steve Jobs Makes for Great Opera
9 Works by Women Writers We Want to See Adapted into Operas