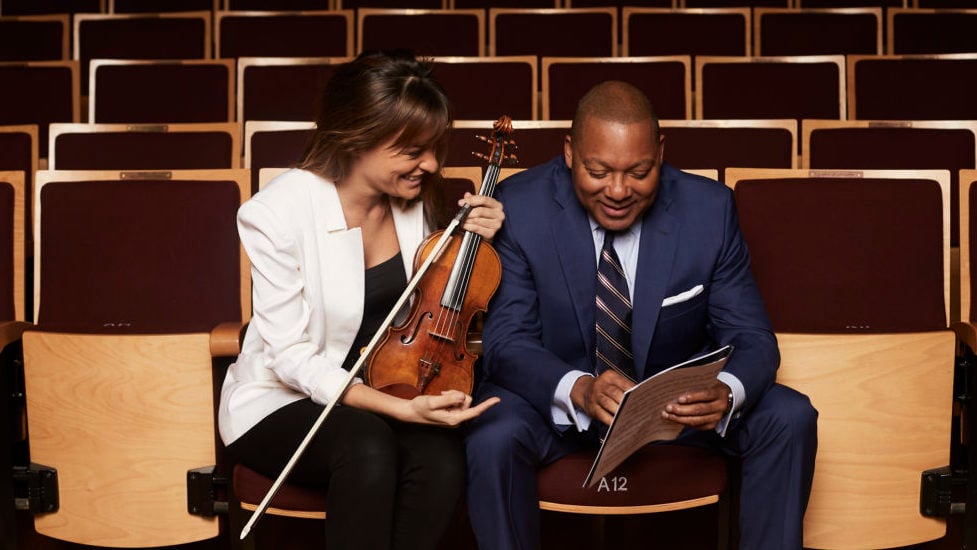 Classical music, jazz, Celtic folksongs, and funk — these genres make up just a few of the words in Wynton Marsalis’ musical language. The Grammy-winning trumpeter and composer has explored a range of repertoire throughout his career. Marsalis’ curiosity inspired violinist Nicola Benedetti, and in turn, her dream of premiering a new concerto.

Benedetti and Marsalis’ collaboration is highlighted in a Decca Classics album that is now nominated for two Grammy Awards: Best Composition and Best Solo Instrumental Performance. Recorded with Cristian Măcelaru and the Philadelphia Orchestra, Benedetti presents Marsalis’ Violin Concerto in D Major, a work that she says is a “path of discovery.” Benedetti also performs Marsalis’ Fiddle Dance Suite for solo violin on the album, which was previously featured on WFMT’s New Releases.

In a recent interview with WFMT, Benedetti discusses the process of preparing for a new concerto, discovering Marsalis’ vast musical influences, and her best advice for young artists.

WFMT: In the BBC feature about this concerto, you note how it’s difficult to put a new work into context. We don’t have as much perspective as we do with a composer like Beethoven. How did you prepare for this piece, especially a work with many musical influences?

Benedetti: What I eventually settled on and decided to focus on was Wynton’s music. I knew a lot of his music any way, but he has recorded a lot of things. He’s in an unusual and unique position in terms of his musical influences, for somebody that has studied and played the music of all the classical greats and all the jazz greats. He has such a deep fascination of folklore of any and every nation – the Celtic traditions, but also the blues traditions, and he also grew up playing funk music. It’s a really unusual convergence of styles that we so often separate and categorize.

The commonality between his relationship to all of those styles is his seriousness in studying them. People combine styles, but fairly often, that sits on a superficial level. With him, he is a worker like nobody I’ve ever met. He’ll study something until he can grasp as much of it as possible. [These musical styles] are sewn together in a way that is uniquely his voice.

Of course, that then leads you in many directions, because you hear distinct influences in colors, styles, harmonies, tones, and little idiosyncrasies in Wynton’s music. It’s talkative! It can lead you down any of those paths on a journey of discovery. I did do some of that and continue to, but I think his overriding message is that these [musical genres] are not that far apart. The people the music belongs to, they’re also not that far apart. I enjoy the underlying life belief that exists and is revealed through his music.

WFMT: What were the conversations like with Wynton in developing a violin concerto?

Benedetti: He wanted to know before he started writing what would be my vision of a concerto. We had so much dialogue on that. I went to visit him, and we spent a day just talking about what that shape could look like. I bought him scores of every violin concerto that I could think of and sat down and said, “Look, this is how Brahms develops the drama here.” That was my technical offering, and his was of course speaking of styles, textures, orchestration, melodic and rhythmic material.

But actually, our priority was what is most successful for any given audience when it comes to the genre of violin concertos? Let’s make sure that we come up with something that people are going to enjoy and want to hear again. That kind of discussion is always tricky and can be messy, because you’re never sure until you hear some notes what somebody means by, “Oh, I want this to be liked,” or “I want this to be popular or represent a contemporary feel.”

People can say all kinds of things, and they’re saying it within their sound world and perspective. That was the biggest relief surprise — we were absolutely on the same page. It made the process all that more personal and enjoyable.

WFMT: New music can be in a precarious position because there’s something to be said for experimentation, yet you do want to keep listeners interested as you mentioned. What were the conversations like in balancing those two aspects?

Benedetti: I think a lot of composers collaborate deeply with orchestras, conductors, and soloists, and I think that process was natural for us. I always hesitate to say I think there should be more of this or that. People will do what is natural for them, and [it would be] a disservice to themselves and the music by trying too much to fit into a mold that is just encouraged or expected of them.

With that said, a push and pull between the consumers of music and the creators of music is not a bad thing. Like Wynton always says, “A musician’s mind is a fascinating thing.” It’s an endless journey down whatever path you choose to take, but that means that path can go away from what people want to hear. Of course, it is your prerogative if you want to keep an audience with you or not, but we both are very interested in keeping an audience with us. [Laughs]

WFMT: What’s some of your best advice for a young artist?

Benedetti: The sooner you can get away from just worrying about, “Am I playing this next note in tune?” and “Am I playing this rhythm right?” — those things are of course hugely important, but don’t miss the larger things that you can analyze and approach through your relationship with your instrument. Don’t waste your time [with an] instrument being mindless. Be as focused as you can on analyzing the music in front of you, not in a technical way but from a perspective of love, interest, and curiosity.

70th Anniversary Special: Interview with Almita & Roland Vamos
2020 Grammys: Classical Music Nominees and Winners
Jennifer Koh and Reiko Uchida [Rebroadcast]
Decade in Review: The 2010s and Classical Music
In the Age of the Visual Album, What Can Opera Learn from Beyoncé?
In Their Own Words: Quotes From Artists and Friends of WFMT Who Died in 2020