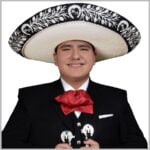 Marco A. Villela, 17, trumpet and vocals

Founded four years ago as a student group in Chicago Public Schools and still comprised of teenagers, the group’s debut album was nominated for a Grammy. This most recent release is a collection of different styles within mariachi: classics from the Mexican songbook such as México Lindo y Querido and an ode to the capital city, Mi Ciudad; boleros románticos like Vuélveme a Querer; boleros rancheros like El Último Trago; and three songs by the legendary singer-songwriter Juan Gabriel. 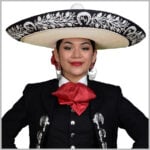 The musicians recorded at Pressure Point Recording Studios in Chicago’s Record Row, and production took place under unusual circumstances due to the COVID-19 pandemic. Their music director and arranger Rigoberto Alfaro was unable to travel from Mexico City to oversee the sessions, so 17-year-old trumpeter and singer Marco A. Villela was deputized to be music director from the control room. Additionally, the musicians were recorded in much smaller groupings than usual to ensure social distancing.

In this episode we hear selections from the album, and an interview with both Marco and 16-year-old guitarist & singer Melanie Juarez. Both are from Chicago’s Avondale neighborhood, and have been members of Mariachi Herencia de México since its founding.

Mariachi Herencia de México has appeared on Introductions before: in in 2017, in 2018, and live from the Jay Pritzker Pavilion at the 2019 YAS!Fest.