Most recently, Chen was featured on the 2020 HearNOW Gala of the Philadelphia Orchestra. She has been featured as a soloist with the Vicente Chamber Orchestra, Chicago Youth Symphony Orchestra, Oistrakh Symphony Orchestra, Sinfonietta DuPage, and Capital City Symphony. She has played on WRTI; on Show 347 of NPR’s From the Top; and twice on Introductions: as a soloist in October 2016 and as a member of CYSO’s New World String Quartet in November 2016.

As a member of the Chen String Quartet, Beatrice gives dozens of community recitals each year throughout numerous venues. Most recently, the quartet appeared on Constellations Chamber Concerts in Washington DC, From the Top‘s virtual concert series, and twice on the International Music Foundation’s Rush Hour Concert Series. The Chen String Quartet will perform live on WFMT, direct from the Music Institute of Chicago’s Nichols Hall, on Sunday October 11, 2020.

Beatrice participated in the Young Performers Program at the [email protected] Chamber Music Festival and Institute in 2016. She also spent numerous summers at the Aspen Music Festival and School and participated in the 2017 Finckel-Wu Han Chamber Music Studio. Prior to studying at Curtis, she was principal violist of the Chicago Youth Symphony Orchestras for five years. Beatrice has studied with Victoria Chiang, Matthew Lipman, and Paul Neubauer. She plays on a viola made by Keisuke Hori from Chicago in 2015. 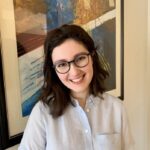 Also on this episode, Beatrice is joined by her Curtis classmate, composer Elizabeth Younan. Lizzy joins the interview from her home in Sydney, Australia, to talk about her piece Fantasia and working with the Chen family.

Caprice No. 20, by Niccolò Paganini