Soprano Janai Brugger and tenor Matthew Polenzani have been colleagues and friends since they first shared a stage together in Lyric Opera’s 2018 production of Mozart’s Idomeneo. Unbeknownst to them, however, it likely wasn’t the first time they overlapped in the Civic Opera House. Brugger says her first-ever opera, as an audience member, was Magic Flute, showing at Lyric sometime in her early teens; Polenzani, a Ryan Opera Center alum, played one of Sarastro’s priests in Lyric’s 1996/97 production.

When they connected the dots during our recent conversation, Brugger gasped aloud. “That could be possible…! Which would be totally amazing!”

A world that gets smaller still if you’re from the Chicago area, as Brugger and Polenzani are. Brugger hails from southeastern Darien, Polenzani from the northern suburbs. The duo performed together earlier this year at Ravinia, singing a semi-staged La clemenza di Tito with James Conlon. And now the two opera superstars were sharing a stage again, this time at the Metropolitan Opera to sing in Luigi Cherubini’s 1797 opera Medea.

Singing as the spiteful titular sorceress is yet another artist with Chicago-area ties: soprano Sondra Radvanovsky, originally from Berwyn. Polenzani and Brugger play the other corners of the opera’s messy love triangle—Polenzani as Medea’s husband, Giasone the Argonaut, and Brugger as Glauce, Medea’s rival for Giasone’s affections.

On October 22, Medea hits theaters for the Met’s Live in HD cinema broadcasts. Saturday also inaugurates the Met’s Live at Home series, a livestream created for opera fans who live prohibitively far from a participating movie theater. (Fans can check their eligibility here.)

But if you can’t make that or the encore on October 26, never fear. Since it’s a Lyric co-commission, this production of Medea will be mounted by the company in a future season.

We caught up with Brugger and Polenzani for a quick Zoom chat between performances at the Met.

WFMT: You’ve sung together before. What’s your history with Sondra Radvanovsky, who’s singing the title role in Medea? 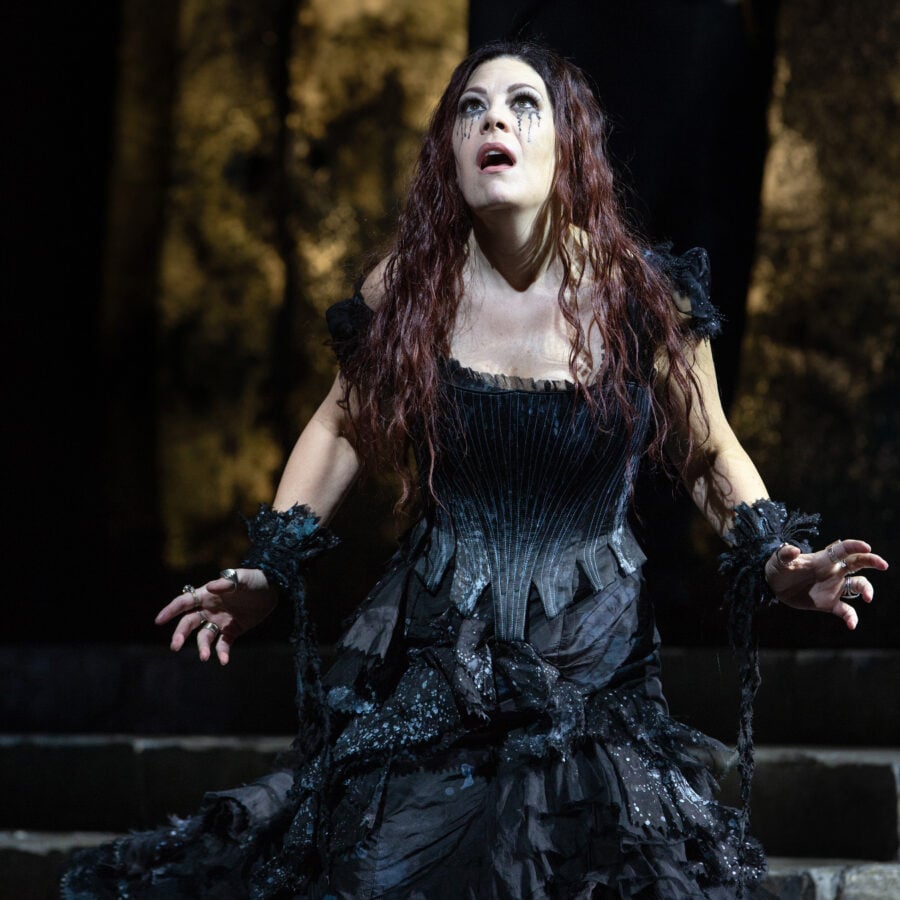 Matthew Polenzani: The first time [Sondra and I] sang an opera together, we think, was Roberto Devereux at the Met, in 2016, but I’m certain we sang a couple of concerts together beforehand. I’ve known her for even longer, because we’re virtually the same age and entered the Met around the same time.

Janai Brugger: Mine’s pretty easy because this is my first time actually working with Sondra. I did meet her briefly once, when I did the Met Opera council auditions here in New York. After the finals, she came up to me at the reception and congratulated me. I was so shocked and kind of fangirling. Now, I’m working with her on stage! She’s a lovely person onstage and off.

Polenzani: Well, she’s from the Chicago area. I’d say, as a generality, we’re a little bit more open and a little less guarded, being from the Midwest. Sondra definitely carries that with her even though she’s lived in Canada for a long time now.

WFMT: Of course, you say “we” because you both grew up here—you in the northern suburbs, Janai in southwestern Darien. And Janai, you now live in Lincoln Park, where you attended college at DePaul. What early experiences did you both have that made you think, “OK, I want to do this”?

Polenzani: My very first opera was the first one I was in! I went to Eastern Illinois University down in Charleston, Illinois, about an hour or so south of Champaign. We did Mozart’s La finta giardiniera —except we sang it in an English translation and called it “Lunatics and Lovers.” I don’t even know how we came up with that. I was singing Belfiore; he has one aria that’s very florid, with lots of crazy coloratura. Working on it with my voice teacher, I was just like the emperor in Amadeus: “There are too many notes!” [Laughs]

Brugger: Well, my mother was the classical fanatic, and my dad was the Motown guy. I grew up with an appreciation for both, and really all genres of music. But my earliest memory was my mother taking me to [Orchestra Hall] to see Kathleen Battle in recital. It was my first time hearing something at that level and really experiencing goosebumps. I remember being completely blown away by her voice, her presence. She was wearing this yellow gown that made her look like a Disney princess to me.

Growing up in a small town like Darien, it was always awesome to escape to anywhere in the city, even if it was, like, Taco Bell. But I was very fortunate to get the music bug as early as sixth grade. My first time onstage was in a school production of The Music Man—I was Marian the librarian. There’s a VHS tape that will never see the light of day! Then, in junior high, I got to tour with Donny Osmond for Jacob and the Amazing Technicolor Dreamcoat. That’s definitely what started my love of being onstage, even though I didn’t see myself as an opera singer at first.

Polenzani: I mean, the first time I went to see an opera, at Lyric, I was probably a junior in college. I’m pretty sure it was Lucia [di Lammermoor] or Rigoletto. Before that, I was in a rock band in high school—

Brugger: You were not!

Polenzani: That’s exactly right. There’s a band that made its way out into the universe with that name, but it’s not us. The genre of music that I still listen to the most is probably classic rock and roll: Van Morrison, Pink Floyd, Led Zeppelin, bands from that era.

WFMT: Streaming, of course, is beyond ascendant in opera, and the Met’s Live at Home rollout aims to reach more small-screen audiences than ever before. I’m curious what training you both received, if any, to sing in front of cameras.

Brugger: Medea‘s my first HD broadcast, so I’ll be learning by doing for the scratch performance [live performance, filmed for the company’s internal reference to prepare for live broadcast]. I’ll be looking to looking to Matthew and Sondra for guidance. I definitely have to use different techniques when I’m close to a microphone, doing an audio recording—for example, I can’t blow out air in the way I would while singing onstage. 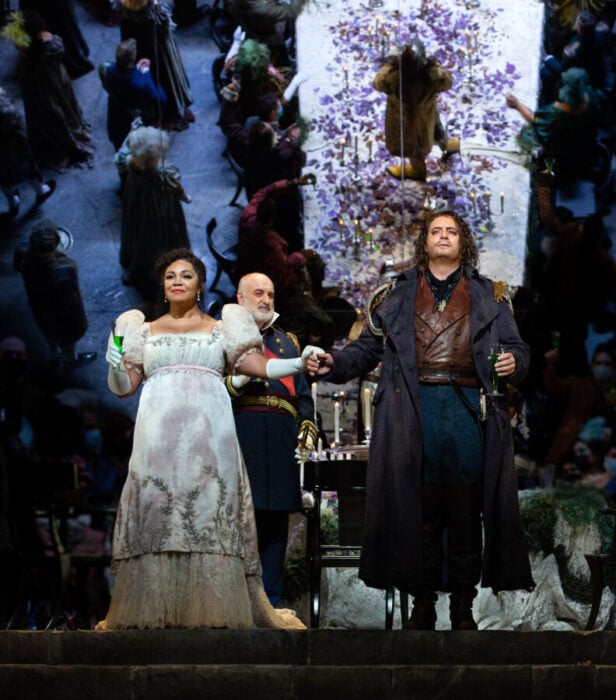 Polenzani: I’ve probably done around ten or so broadcasts at this point. In years past, I’ve asked for the scratch tape so I could see what certain moments look like. But the cameras don’t get up in your face. There’s only one camera that’s even close—the one that goes along the edge of the stage, over the orchestra pit.

In terms of the acting, there are definitely pieces where what’s required dramatically in a hall of 4,000 seats is different from what’s required dramatically on a screen. There aren’t too many gentle, subtle things in Medea, [acting-wise]—most things are kind of big. That’s just because of the characters we have. For example, in my second duet with Sondra, there’ll be some of that [subtlety], but the first duet is all anger, assertiveness, aggression. And Janai, your character, Glauce, has a nervous bent in her that requires some histrionics.

Polenzani: Here’s the thing, though: You can’t sing any better if a camera is in front of you than if it’s not. You’re only going to sing your best, because that’s who you are as a person. That’s why you’re here. I’ve taken that attitude for myself every single time: If I didn’t deserve to be here, I certainly wouldn’t be here. And that’s true for you, too.

Brugger: Aw, thank you… I’ve been a big fan of Matthew’s for a very long time as a student in the opera world. It’s amazing that I get to share the stage with him.

Polenzani: Oh, come on! You’ve offered up some of the most glorious singing that I’ve heard. It’s nice that that can go in both directions for us.

For information, visit metopera.org. This conversation has been edited for length, clarity, and flow.

In the Age of the Visual Album, What Can Opera Learn from Beyoncé?
Lyric Announces 2021-22 Season With 'Magic Flute,' 'Macbeth,' Mazzola
Hope and Strength: Celebrating Black Artistry with Lawrence Brownlee & Lyric
Decade in Review: The 2010s and Classical Music
Enrique Mazzola on Returning to the Stage, Taking the Reins at Lyric
10 Woman Conductors You Should Know