A new show comes to WFMT airwaves this December. Beyond being the most recent addition to the station’s lineup of series, the show is new for what is presents… and how it presents it.

Sounds Classical (Fridays, 8:00 pm) is hosted and produced by Kristina Lynn and LaRob K. Rafael. Each week, in lively conversations, wide-ranging selections, lean-in interviews, and exciting new works composed and performed, in many cases, by local artists, our hosts lead a personal exploration of what “classical music” really means as a genre… and why all are welcome in this bountiful and dynamic art form.

WFMT: Talk to us about the title Sounds Classical. What does that phrase say to you?

LaRob K. Rafael: I think listeners tune in to WFMT expecting to hear Bach and Beethoven, Schumann and Schubert, Brahms and Wagner. Sounds Classical is a play on that idea. You’ll hear those classical sounds, but what may be different is that Kristina and I are trying to bring a more conversational approach. You’ll hear Brahms and Schubert, but you’ll hear the discussions Kristina and I have around the pieces. What do they mean to us? How have we been inspired by them?

And also, you might not hear as much Brahms and Beethoven and Schubert. Kristina and I will try to present composers that are brand new and relevant to our lives as young classical music lovers. We’ll try to engage longtime WFMT audiences while inviting a newer audience to come and join the conversation about classical music.

Kristina Lynn: Classical music is so European-focused, Western Music-focused, that while we were discussing the first episode, we wanted to include other cultures and communities and points of view. But it’s also hard to define what classical music is, specifically.

Of course, there are very culturally specific musical sounds from hip-hop to Carnatic singing. Obviously, that’s not the same thing as Mozart. But it would be unwise for the person who appreciates the history of Mozart to exclude musical ideas from around the world when we consider how classical music comes to be.

WFMT: How does this perspective shape the way you are choosing to host and present music?

Lynn: There’s this idea that you must be an expert to speak on classical music. I’m learning to put that idea aside, and I don’t need to know everything in order to enjoy and speak on it and share it with people.

Rafael: When people listen to classical music, they’re not thinking about “oh, this modulation to the fifth,” or whatever. When you hear music, your first reaction to it comes from how you feel. I think that’s what Kristina and I do well on the show. The priority and expertise come mostly from how we feel about it. We want to present music in this conversational way. It can be a little challenging to fit it all within an hour and talk effectively about it.

WFMT: Take us through the first few episodes.

Lynn: In our premiere episode, we’re exploring the idea of “What does sound classical?” Because when you think of classical music, specific composers normally come to mind. We want to explore why that is and invite other sounds into the genre, into the conversation about classical music. 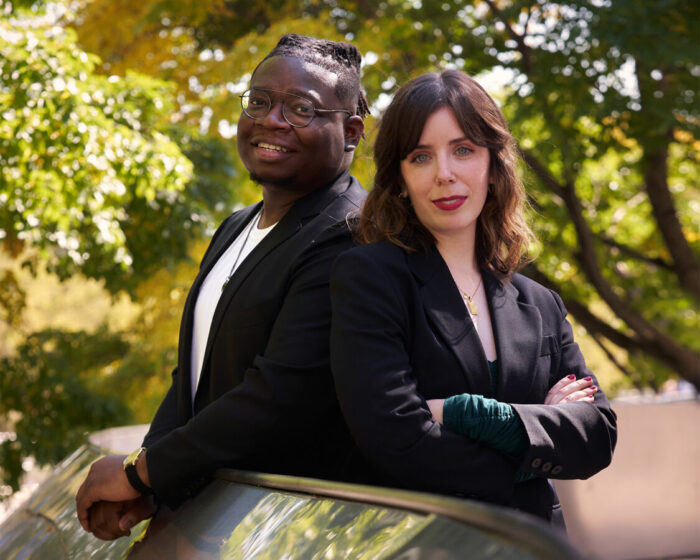 Lynn: In subsequent weeks, we talk about our first experiences in classical music and hear about others’ introductions to classical music. We’re just talking about this music and how it made us feel the first time we listened to it. The impact it had on us.

Rafael: We also explore our own instruments. Kristina is a fabulous trumpet player who studied trumpet performance. [Chuckling] I’m an okay singer.

Rafael: We will share what we love about our respective instruments. I learn a bit about the intricacies of trumpet and share with Kristina something interested about the voice.

Lynn: A little show and tell. It ties back in with the theme of the expert versus the newcomer. It has been a long journey of studying music and working in music. So revisiting those first memories is special.

You can expect to hear the familiar tunes and composers, and we also want to highlight newer and underrepresented composers and performers. And we branch out from classical music a bit, too. You may hear some jazz, musical theater, and blues. And that’s just in the first couple of episodes.

WFMT: What are you most excited about in sharing this new show?

Rafael: I’m looking forward to talking about how fun classical music can be. One of the things I love about doing this show is that we listen to the music and our reactions just kind of … happen. If you’re in a concert hall, you’ve got to wait until the end of an entire to piece to clap. But sitting in the studio with Kristina, listening to it, you’re getting the head nods, the claps, sometimes singling along.

If you’re hearing a symphony in a concert hall, maybe you’re thinking, “This is 55 minutes long, how am I gonna get through this?” But when you actually spend time with it, you find that there is a story being told to you. Even if a piece is from centuries ago, you can relate to it just as you would relate to Taylor Swift’s new album.

Rafael: This show is a “come as you are” series. Whether you’re an expert in classical music or you’ve never heard a classical piece before. We welcome you to the show and to experience what Kristina and I are experiencing in real time.

Lynn: Speaking to all these types of people has been a challenge, but it’s been a really fun one. Listeners will hear that we’re really enjoying what we’re doing, and we hope they’ll enjoy it too.

Listen to Sounds Classical with Kristina Lynn and LaRob K. Rafael beginning Friday, December 9, 2022 at 8:00 pm on 98.7WFMT and streaming on wfmt.com and the WFMT app. This interview has been edited for length and clarity.

Meet WFMT's Newest Voices
In the Age of the Visual Album, What Can Opera Learn from Beyoncé?
Capturing the Chevalier, One of the Most Remarkable Stories in Classical Music
WFMT at 70: A Q&A with WFMT’s General Manager and Music Director
How To Choose the Best Speakers to Listen to WFMT (and All Your Favorite Music!)
Lyric Returns With Free Star-Studded Virtual Gala