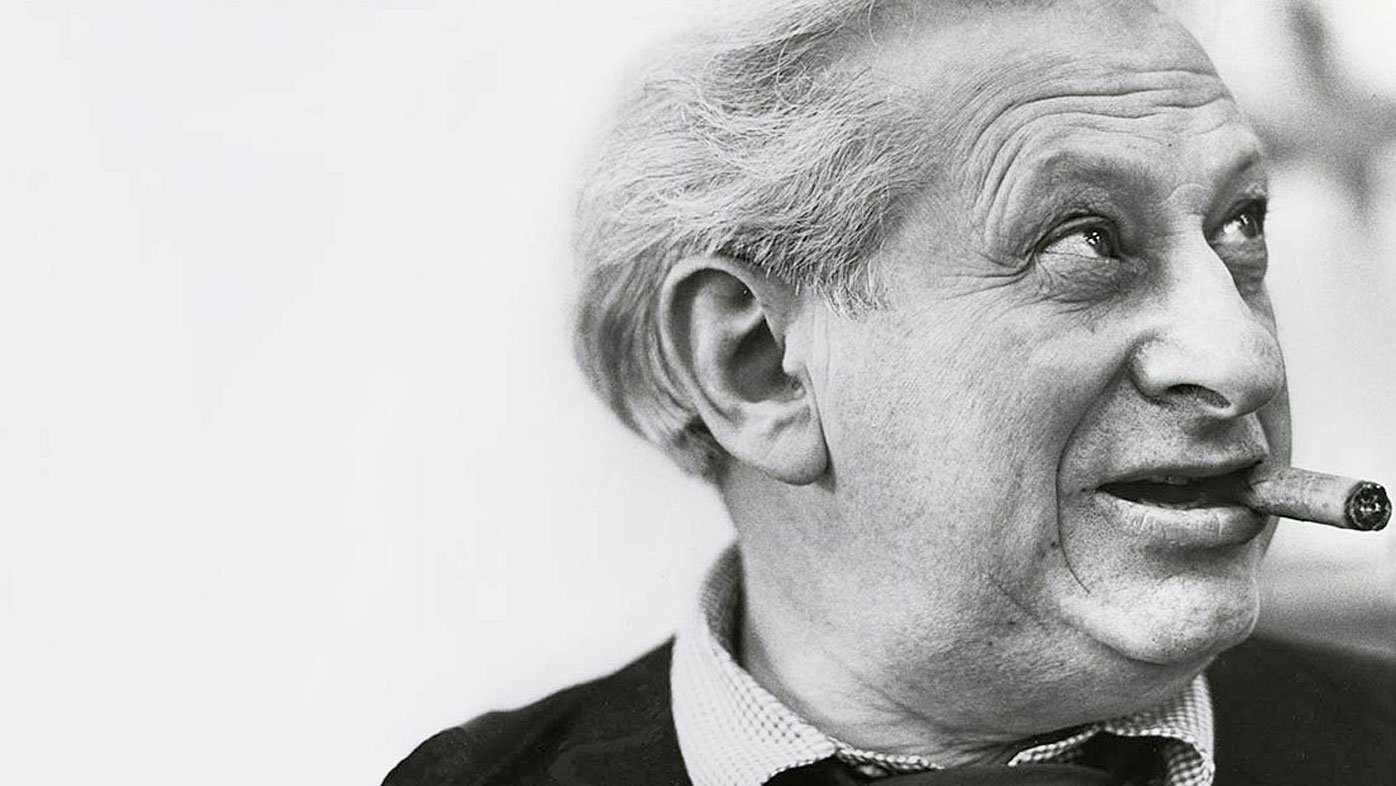 For 45 years (1952-1997), WFMT was home to Pulitzer Prize-winning author Studs Terkel, who operated from a tiny room overstuffed with papers, books, and an antique typewriter. Studs’s career – and everything cultural – unfolded before our eyes. Over the years, the guests on his daily radio show ranged from ordinary Chicagoans to international figures: political leaders, writers, performers, social activists, and labor organizers. Covering wide-ranging topics, Studs was remarkable in his depth of knowledge and in his ability to get others to open up and talk. Most of all, he modeled a quality that became his job title at WFMT: Free Spirit.

In his 45 years on WFMT radio, Studs Terkel talked to the 20th century’s most interesting people. Browse our growing archive of more than 1,200 programs in the Studs Terkel Radio Archive.

Here is second half of Studs Terkel’s two-part conversation with violinist, conductor, and musical mentor, Yehudi Menuhin. Menuhin and author Karen Shaffer spoke with Studs in March 1986, when Menuhin performed a concert in tribute to the early twentieth century American violinist Maud Powell.

Here is part one of “This Train,” WFMT’s annual remembrance of the 1963 civil rights March on Washington.  Studs joined hundreds of Chicagoans on a train bound for Washington, D.C.  He recorded their thoughts and experiences on his portable tape recorder and wove those historic voices into this award-winning documentary.

This episode of the Best of Studs Terkel is devoted to the second and final part of the award-winning documentary called “This Train.”  Studs wove this sound-scape commemoration of the 1963 March on Washington from voices he recorded on a train bound for Washington, and at the event itself.

In December 1992, the brilliant and versatile Mexican American author Sandra Cisneros spoke with Studs Terkel. She recounted growing up in Chicago’s Humbolt Park neighborhood, and recited excerpts from her poems, short stories, and other writings.

On August 12, 1959, Studs Terkel welcomed members of the Chavez Mexican Folk Ensemble for a live performance on WFMT. We rebroadcast this musical gem in honor of the Mexican national holiday El Grito de la Independencia.

American pianist, recording artist, and composer, Lincoln Mayorga, has spent his long career in the fluid borderlands between classical and American popular music. He was Studs Terkel’s guest in WFMT’s studios in 1984, discussing and performing compositions by Louis Moreau Gottschalk, Scott Joplin, Debussy, and more.

In this hour from 1985, Studs Terkel welcomes James Baldwin (1924-1987) as the distinguished American author discusses his book, The Evidence of Things Not Seen.

Chicagoan Steve Goodman (1948-1984) was a virtuosic guitarist, prolific writer and singer of songs, and frequent performer on WFMT. In 1976, he and Studs Terkel discussed Big Bill Broonzy, inspiration, and Steve’s recent album, Words We Can Dance To.

For four decades, the Emerson String Quartet has maintained its stature as one of the world’s premier chamber music ensembles. In 1989, violinists Eugene Drucker and Philip Setzer, violist Lawrence Dutton, and cellist David Finckel dropped by WFMT’s studios to talk with Studs Terkel about Beethoven, Bartok, commissions, and the ensemble’s mastery of such broad repertoire.

Studs Terkel was an ardent fan of J.S. Bach. The German composer and virtuoso of the Baroque period  was born on March 21, 1685. In 1980, Studs crafted this tribute featuring Andrés Segovia, Dame Myra Hess, Pete Seeger, Bidu Sayão, Pablo Casals, Jean-Pierre Rampal, and others.

With their closely infused vocal harmonies and easily flowing story songs, the Clancy Brothers and Tommy Makem charmed their way into the heart of the 20th Century folk music revival. Members of the Irish ensemble visited Studs on WFMT in November 1961.

In 1983, the iconic American entertainer Lena Horne toured the United States with her autobiographical show, The Lady and Her Music. Backstage in Chicago, she spoke with Studs Terkel about her life and career.

Studs Terkel frequently presented free-association programs featuring his favorite recordings. This Best of Studs Terkel hour from 1993 brims with some of the jazz, classical and folk music Studs loved best.

Tonight, WFMT presents one of the great American voices of the past: coloratura soprano Mattiwilda Dobbs (1925-2015). She was born in Atlanta, and during her career broke color barriers on opera stages around the world, including La Scala, Covent Garden, and the Met. She was Studs Terkel’s guest in 1975.

In February 1971, Studs Terkel presented this birthday program honoring abolitionist Frederick  Douglass, who rose from slavery to become the leading African-American voice of the nineteenth century. The program, woven of words and music, includes conversation with author and social historian Lerone Bennett Jr, and readings from the Douglass memoir, My Bondage and My Freedom.

This evening’s Best of Studs Terkel rebroadcast features bluesmen Sonny Terry with his harmonica and Brownie McGhee at the guitar. The duo were a team for a long time, and Studs opens this program from 1970 with an excerpt of an earlier Sonny Terry and Brownie McGhee concert which Studs had introduced 11 years before.

In November 1975, Studs Terkel used his portable tape recorder to capture an interview with one of the best-known and most indelible figures of the 20th century: boxing great and activist Muhammad Ali. Ali was born Cassius Marcellus Clay Jr. in Louisville, Kentucky on January 17, 1942 and succumbed to Parkinson’s in 2016.

Tonight, the Best of Studs Terkel presents It’s Like A Dream to Me, Studs Terkel’s 1970 birthday tribute to Dr. Martin Luther King, Jr. (1929-1968). Please be advised that in addition to the hope, optimism, and struggles of the Civil Rights Movement, this historical program includes strong language of an offensive nature which conveys the harsh reality of the time and place.

The Best of Studs Terkel on WFMT presents Born to Live, a long-time New Year’s broadcast tradition. Studs produced this program of interviews, spoken word, and musical responses to the nuclear age with colleague Jim Unrath in 1961. Born to Live won the Prix Italia, an award Studs described as “the equivalent of the Nobel Prize for radio and TV documentaries and ...

Studs Terkel first presented his Christmas Memories program on WFMT in 1961. Since then, this holiday compendium of voices and memories of childhood Christmases has become a perennial favorite.

Beethoven’s birthday has always been something of a holiday at WFMT. Tonight the Best of Studs Terkel marks the composer’s birth anniversary with this radiophonic tribute from December 16, 1968.

On December 13, 1951, Bernie and Rita Jacobs created WFMT. Studs Terkel joined them within the year and for for the better part of a half-century conjured on-air conversations that define the twentieth century.  It was in 1996 that Studs presented an aural journey of remembrance in honor of the station’s 45th anniversary.

Born December 11, 1931, Rita Moreno has won all four of the most prestigious awards in show business: an Oscar, a Tony, two Emmys, and a Grammy. In her 1962 conversation with Studs Terkel, the venerated performer talks about her Puerto Rican ethnicity and how it relates to her role as Anita in the 1961 movie version of Leonard Bernstein’s ...

Vine Deloria, Jr. (1933-2005) was a lawyer and theologian, known to many as the leading American Indian intellectual of the 20th century. He was Studs Terkel’s guest on WFMT in 1975.

One of the great voices of the twentieth century was that of American singer and civil rights activists, Odetta. She was a favorite on WFMT, and appeared frequently as Studs Terkel’s guest.

In addition to being a prolific author and interviewer, Studs Terkel was a voracious reader and accomplished actor. From time to time on his long-running WFMT radio program, Studs read excerpts from his favorite literature. On November 11, 1971, that meant passages from Johnny Got His Gun, Dalton Trumbo’s powerful account of the impact of World War I.