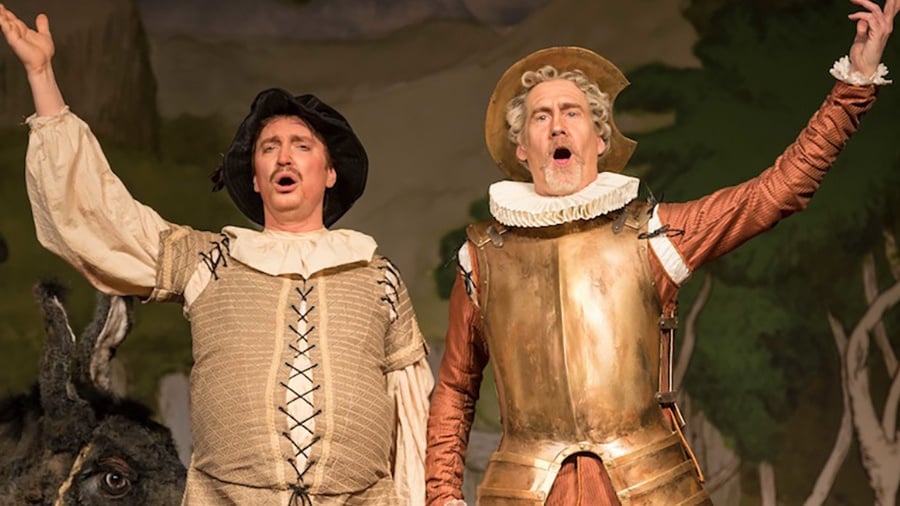 You’ve come to know Peter van de Graaff’s voice by listening to Through the Night with Peter van de Graaff and as WFMT’s chief announcer. But, did you know you can also hear Peter’s voice on some of the world’s most prestigious stages?

As a bass-baritone, Peter has performed with leading orchestras — including the Chicago Symphony Orchestra — and has collaborated with today’s most esteemed conductors such as Pierre Boulez, Bernard Labadie, and Paul Hillier.

Right now, Peter is gearing up to perform the title role in Telemann‘s Don Quichotte with the Haymarket Opera Company, a new organization devoted to ancient opera in Chicago. The ensemble, led by Craig Trumpeter, features some of today’s most sought-after early music specialists including harpsichordist and two-time Grammy Award nominee Jory Vinikour. As a prelude to each performance of the opera, Vinikour will perform C. P. E. Bach’s Concerto in D Minor for Harpsichord with HOC’s period orchestra. Peter tells us more about his work off-mic and onstage in this upcoming performance of Don Quichotte.

WFMT: Peter, when you haven’t been busy in the studio, where have you performed this season?

Peter van de Graaff: I did Beethoven’s 9th Symphony with the Wichita Symphony and Oak Park/River Forest Symphony, Messiah with the Wisconsin Chamber Orchestra, I gave a fascinating poetry reading/performance recital with Inna Faliks. We’re looking forward to the Schumann recital in the Schumann home in Leipzig in May, followed by recitals in London and Holland.

WFMT: Haymarket Opera Company is new to Chicago though has already made a big impact. In which of Haymarket’s previous productions have you appeared?

Van de Graaff: This will be my third production with them. I was in La descente d’Orphée aux enfers and Dido and Aeneas. Being a radio announcer leaves me little time for singing, so I have to choose my engagements judiciously and, although I do very little opera because of the time demands, I do make an exception with this excellent company! WFMT: Haymarket has already presented a diverse range of early opera. How did the company select Telemann’s Don Quichotte?

Van de Graaff: Craig Trompeter [HOC General Director] has been talking about it for awhile. I know that he is attracted to the extremely high quality of music and theatricality of the piece. When we realize that it was Telemann’s last opera, we know that he brought one of the most fecund careers to its end with it-all of his past experience.

WFMT: What have you learned about Telemann through your own encounter with this music?

Van de Graaff: Not only his inexhaustible creativity, but also his amazing sense of humor! It’s interesting that the first half of the opera is just Don Quichotte and Sancho Panza alone. Telemann has written some incredibly fun music for the two to sing-some truly funny arias about Don Q.’s dreams of chivalry and Sancho’s donkey & mishaps, etc. Telemann is a real master of capturing characterization. He is known for his instrumental music, but he was a very, very fine operatic composer. I have sung one other Telemann opera, Pimpinone […], but this work has only served to deepen my appreciation for him as one of the Baroque’s greatest.

WFMT: What are other upcoming performances or projects to which you are looking forward?

Van de Graaff: Beyond the three European recitals in May, we’re keeping our fingers crossed that we will be able to perform an all-Grieg recital in his home as part of the WFMT trip to Scandinavia in August. Come join us!

A comic tour de force with a delightfully rich score that includes piccolo, bassoon, drums and trumpets, this production will be one of Haymarket’s most ambitious yet. At the age of 80, Georg Philipp Telemann composed Don Quichotte to the witty libretto of his 20-year-old friend Daniel Schiebler. The story is drawn from one of the greatest works of all literature, Miguel de Cervantes’ The Ingenious Gentleman Don Quixote of La Mancha. The Don, a retired country gentleman who has gone mad reading too many chivalric novels, sallies forth into the Spanish countryside to make his name as a knight-errant. Accompanied by his wise-cracking squire, Sancho, he happens upon the wedding festivities of the wealthy herdsman Camacho and Quiteria, the land’s most beautiful shepherdess whose father has forbidden her to wed her true love, Basilio.

See Photo Highlights from WFMT's 70th Anniversary Day of Celebration
10 Woman Conductors You Should Know
Handel in HD: Haymarket's Season Premieres with Streaming 'Acis and Galatea'
In the Age of the Visual Album, What Can Opera Learn from Beyoncé?
In Their Own Words: Inspiring Quotes From Classical Artists and Friends Who Died in 2022
Nicholas Phan and Shannon McGinnis [Rebroadcast]