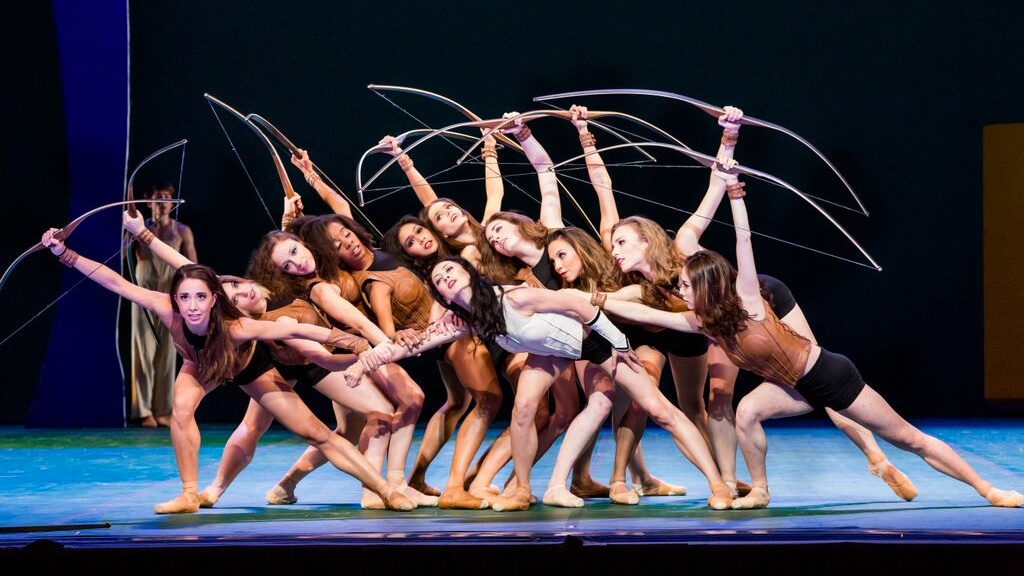 The Huntresses in The Joffrey Ballet’s US Premiere of John Neumeier’s Sylvia (Photo: Cheryl Mann)

When Tchaikovsky heard Delibes’s ballet Sylvia, he said, “I was ashamed. If I had known this music early then, of course, I would not have written Swan Lake.”

Though many dance lovers are familiar with Delibes’ ballet Coppélia, Sylvia is less commonly performed.

Chicagoans have the chance to experience choreographer John Neumeier’s version of Sylvia performed by the Joffrey Ballet, now playing at the Auditorium Theater.

I spoke with Neumeier, Joffrey artistic director Ashley Wheater, and Joffrey music director Scott Speck during rehearsals for Sylvia to learn more about this underappreciated work. When Neumeier was asked to create a new version of Sylvia for the Paris Opera Ballet in 1997, it was a happy accident.

“I was in Paris doing my version of The Nutcracker,” Neumeier explained. “At a press conference, one prominent critic asked if I would consider to do a new version of Coppélia, and I thought ‘Never!’ But, I didn’t want to seem rude, so I said ‘Maybe Sylvia.’ Brigitte Lefèvre called me up and a few days later said ‘I would like you to do a new version of Sylvia for the Paris Opera.’ And the rest is history.”

He first encountered Sylvia he said, “When I was a student at the Royal Ballet School, the Ashton version was revived – I was a sheep or a shepherd or something – and I was always fascinated by the score.”

Sylvia was the work that opened the Palais Garnier in 1878. Since, the most frequently performed versions of this work featured choreography by Ashton and Balanchine.

Neumeier approached Sylvia the way he does all of his work: in three phrases. “The first phrase is of initial acceptance. At that time you say, ‘Yes I want to do this work. There is this mountain, and I have to find a way to climb it’,” he explained.

“Then comes research: looking at the original costumes, what did the ballerinas look like, and all of that.” Then, “the next phase, which is the most important,” he said, “is to forget all of that.” One of the most striking features of Neumeier’s Sylvia is how he reshaped the libretto, which for him was also the most difficult aspect of creating the work.

“I couldn’t follow a libretto I didn’t really believe in,” Neumeier said frankly. The original scenario, he feels, is “rather ridiculous.”

“Before trying to understand anything about the libretto by Jules Barbier and Baron de Reinach,” he said, “I went to Torquato Tasso,” whose poem Aminta inspired the story.

“Sylvia became a story of an extremely ambitious girl, and about how we become so ambitious and so focused, and how we rely on the confidence of a teacher or mentor, which in this case is Diana.”

Later, Sylvia encounters Aminta, with whom she falls in love. “Aminta has this beautiful music for his first solo describing his timidity in communicating his love, and I somehow saw a kind of Charlie Chaplin figure,” Neumeier said.

“At first I thought the whole thing would be set in a girls’ locker room, and Charlie would be the one sweeping the floors,” he said. “I went away from that and went into a more abstract version, largely because of the music. I wanted to find a modern equivalent for the romantic sensuality of the music.”

In Neumeier’s Sylvia, he has collapsed several male roles into one and has also inserted music from another ballet in order to afford more time to tell Diana’s story.

“Diana, the person who represents the law, is herself disobeying the law by loving Endymion,” Neumeier said. “I thought this is such an important and human idea. It must be true that those people who are so strict with us have a private life and weakness. So I used other music, music from Delibes’ La source to create a scene that shows the relationship between Diana and Endymion,” he said.

In producing Sylvia with the Joffrey, Neumeier has been able to emphasize certain aspects of the characters that weren’t as prevalent in previous stagings. “I don’t consider it a reconstruction in the sense that I say, ‘Look at this DVD, she did her arm here, so you do your arm like that, too,” he said. “If you’re doing a Shakespeare play, you must say, ‘To be or not to be.’ But there are a million ways to say it.”

In the current staging of Sylvia with the Joffrey, Neumeier was able to develop the relationship between Sylvia and Diana more. “When we’re young, our relationships with our teachers can occasionally stand as a surrogate for romantic love. In the ballet, Sylvia feels that for Diana before she meets Aminta. So, I wanted to bring that out more in this staging.” 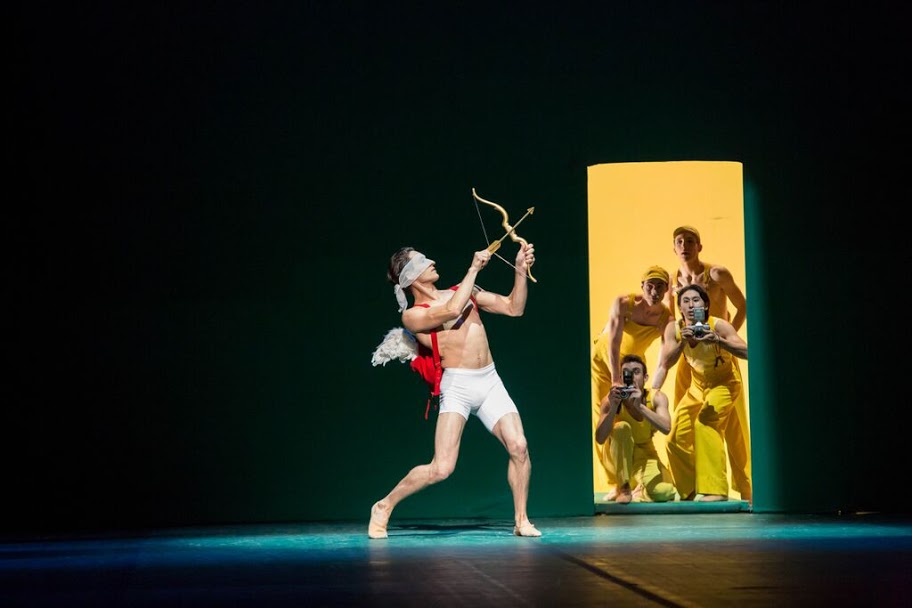 In light of Tchaikovsky’s remarks about Sylvia, we can easily hear the influence of Delibes in more well-known ballets such as The Sleeping Beauty, or The Nutcracker. But, if you listen closely, you can also hear a bit of Wagner.

Scott Speck, who conducts the Chicago Philharmonic Orchestra for performances of Sylvia, said “The horns sound almost like the Ride of the Valkyries,” before spontaneously singing and conducting a brassy excerpt from Sylvia, complete with the cue for the timpani. “It’s possible he had just heard Die Walküre, and I think he must have because that brass just sounds too much like Wagner.

“But in Sylvia, there’s this one very suave, gauzy, misty forest scene with spirits,” he continued. “Here, Delibes’s musical style shifts more towards what would be considered Impressionism – embodied by the music of Debussy and Ravel.”

Speck is grateful to conduct such an exciting score for this particular performance. “Ashley Wheater is so intensely musical. He can’t help it. He hears every note of the music. When he asks for something, it’s usually for the most musical of reasons, and the same goes for John Neumeier. John has said many times, ‘Don’t wait for them, the dancers must be with the music. It might be a little different every time, and you have to go with the music.’ And that is a rare gift in the world of ballet.”

Working with a choreographer who understands music has allowed Speck to ensure that there are no sacrifices being made in the pit because of what needs to happen on stage.

He explained, “There was a moment when I said, ‘I see the excitement you’re trying to get with this very fast tempo, but the musicians can’t gain traction and they’re kind of hydroplaning. So, if we take it at this tempo, the music will have speed but not power. And I think you want power, so if we can slow down a little bit, it allows each musician to grab onto each note and actually support the dancers.” 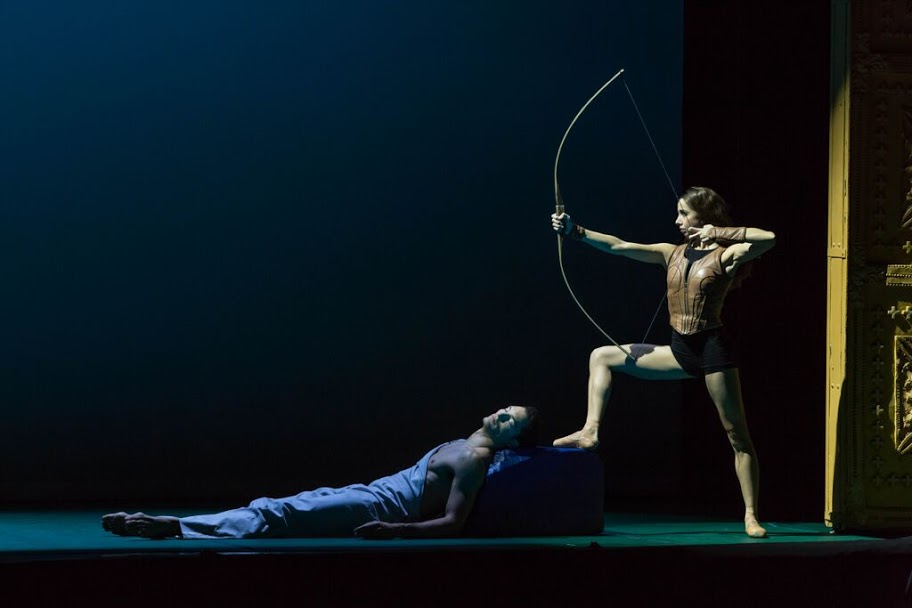 Sylvia has stretched the dancers of the Joffrey throughout the rehearsal process. Ashley Wheater said, “It demands everything you’ve learned and more.

“You have to find the humanity in the character, and sometimes that’s very hard for dancers,” he confessed. “We’re so used to saying, ‘Do this. Copy that. This is where the music is.’ I think John asks us to understand something in a much broader, deeper way, and to really deliver something.”

Working with Neumeier has “challenged in how they think about their art form, about how complex and layered the art form is, and that they will grow from everything they do from here on out,” Wheater said.

“After this experience, the company will never go backwards, it will only go forward. It’s a positive thing for us, the art form, and our audience. I want the audience to look at dance in a different way.”

One reason the dancers have grown through Sylvia is that “it’s definitely ballet technique, but it’s a combined language that’s not so familiar to them,” Wheater said. “It’s a very expressive language that comes from within. It’s not like acting. We actually have to find that emotion because it has to be honest. It’s very hard for dancers because in our upbringing and our training it’s very easy for us to be shallow.”

“We have an artificial technique – people don’t walk down the street on points. But we have to represent real relationships,” he said. “We bring those together so that we are expressing something real but through a very complex technique.”

To learn more about Sylvia, visit the Joffrey Ballet’s website.

Odysseys of Movement, Music in Joffrey Program
In the Age of the Visual Album, What Can Opera Learn from Beyoncé?
'The reach is exponentially larger': How Kamala Sankaram Brings New Audiences, Stories to Opera
Joffrey Announces 2021-22 Season In First Year At Lyric
Choreographer Cathy Marston and the Joffrey Ballet Take 'Jane Eyre' From Page To Stage
Waltzes in a Pandemic: How Vienna Phil Will Continue Its New Year’s Tradition