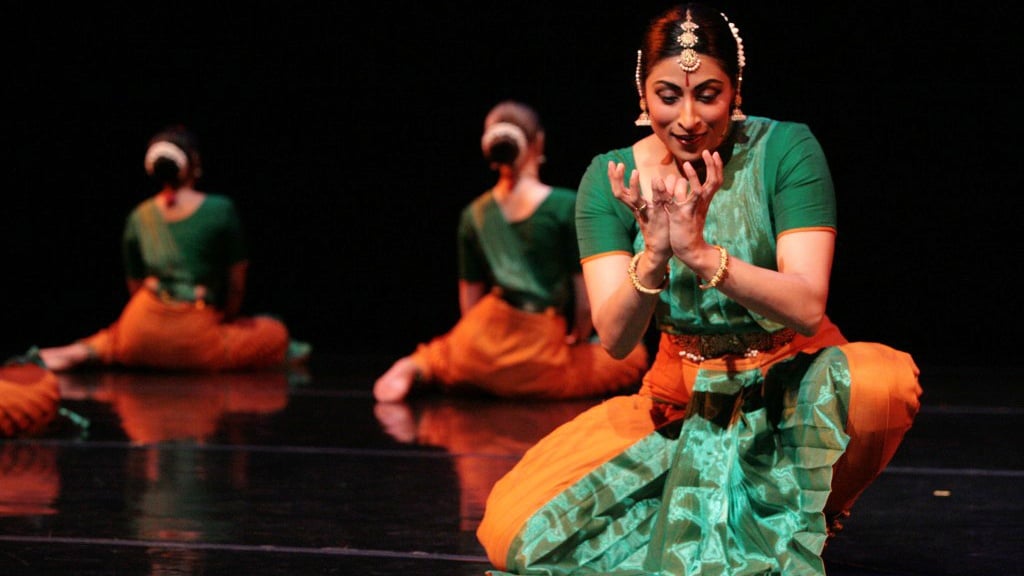 Thousands of years before European ballet was born, Bharatanatyam flourished in India. The ancient art of Bharatanatyam seems to be having a bit of a moment in modern times. Months after appearing in Chicago, dancer Aparna Ramaswamy recently made her debut at the Joyce Theater in New York: one small step for a Bharatanatyam dancer, one giant, dazzling leap for Bharatanatyam dancers everywhere.

Chicago’s most eminent Bharatanatyam guru is Hema Rajagopalan. She has earned honors and awards around the globe, including an Emmy Award (World Stage Chicago, PBS), and seven Choreography Awards from the National Endowment for the Arts – the most received by any U.S. choreographer.

This year, she has something else to celebrate. Natya Dance Theater, of which she is the founder and artistic director, is in its 40th year of bringing Bharatanatyam to audiences around the world. Natya, the oldest continuously performing Bharatanatyam company based in Chicago, was called “triumphant – an enticing mixture of restraint and abundance,” by The New York Times.

To learn more about the fascinating tradition of Bharatanatyam, WFMT spoke with Rajagopalan, observed her dancers in rehearsal, and took classes with her and her dancers.

The Basics of Bharatanatyam

To understand what Bharatanatyam is, you simply have to break down the word itself: it combines bhavam (expression), ragam (music), talam (rhythm), and natyam (dance).

This style of dance dates back many thousands of years, though was codified about 2,000 years ago in a text called the Nātyashāstra. Other texts, such as the Silappadikaram, one of the five great Tamil epics, provide detailed information about Bharatanatyam, as well. 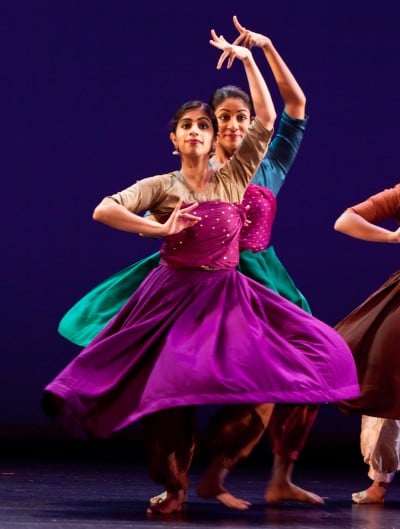 Even when twirling about, the dancers of Natya Dance Theater often maintain ardhamandala, similar to a deep demi-plié, as their basic position. (Photo: Amitav Sarkar)

Rajagopalan explained that these texts “give you so many different moves for all parts of the body, whether it’s the face, eyebrows, eyes, nose, hands, ankles – everything – hip, shin, and so on and so forth.” These basic moves for the different parts of the body are called aduvas. They combine to form pure dance, nritta.

But pure dance is just a “tool that you use to communicate, to express. The most important aspect of Bharatanatyam to express something,” Rajagopalan insisted. “All of this is very clearly spelled out in the ancient texts.” Natya, expression, combines with nritta, pure dance, to create nritya.

The most frequently used position in Bharatanatyam is called ardhamandala, and is similar to a deep demi-plié. The legs are bent to form a diamond shape. From this position, dancers can alternate between firm footwork and light-as-a-feather leaps.

What I learned from dancing in this position myself is that it is a lot more difficult to sustain than it looks! When you combine intricate hand movements and facial expressions with complex footwork, it feels, as Rajagopalan said, “like patting your head and rubbing your stomach at the same time.” Bharatanatyam definitely takes an incredible amount of mind-body coordination.

Dance can bring bliss in both the performers and observers, Rajagopalan explained. “The word Rasa doesn’t have an English counterpart exactly. It means experiencing bliss. We can never know what bliss is, but we create aesthetic bliss. The audience is supposed to experience that bliss through our performance. Our goal is to create that rasa.”

To achieve their goal, Rajagopalan and her dancers explore abhinaya, “the art of histrionic expressions. Subtle expressions through the face, hands, and body communicate shades of various emotions. That’s a very unique feature of Bharatanatyam,” she said.

“What is our soul? Where do we go finally? What is the meaning of life? Why are we here?” These are the questions that Rajagopalan said she wants audiences to ask themselves after experiencing Bharatanatyam. She is celebrating the many colors of Bharatanatyam in a new performance, Varna – Colors of White.

“Varna means colors,” Rajagopalan said. “What we are showing are the colors of Bharatanatyam and of emotions: anger, love, joy, compassion, disgust, tranquility, wonder, surprise, jealous – all of these shades.”

The program is divided into three parts. The first explores Ardhanarishvara, “the androgynous, half-male, half-female aspect of Shiva, and the dichotomy of the god spirit which is all entwined with all material life,” she said.

The dancers explore, “how from Shiva the whole universe comes about, and how we are all interconnected with each other through this one spirit which is all-pervading.” Shiva’s dance not only created the universe but also has the power to destroy.

Despite devotional themes, “It’s a pure dance piece, pure geometric and sculpturesque movement,” Rajagopalan said. Still, it honors Shiva, the Lord of the Dance, and explores various forms of love.” Watch the video below for a behind-the-scenes sneak peek at this dance in rehearsal.

“Love is the main emotion – without love, there is nothing in this universe,” she said. “We explore five different qualities of love – the intense love between lovers, affection or motherly or nurturing love, compassionate love where you are sympathetic towards others, friendly love that connects everyone in the world, and lastly there is devotional love.”

Though love makes the world go round, another piece on the program explores evil. The dance depicts Mara, a Buddhist character who is the embodiment of the six evils. “Mara lives within all of us. We are always doing evil things because of Mara.”

In the dance, Mara rejoices when Indra and Ahalya commit adultery, and her husband, Gautama, goes into a rage. “Indra disguises himself as Ahalya’s husband, and when her husband finds them, and gets very angry and curses them,” Rajagopalan said. “Because Gautama is a sage, he is not supposed to get angry, so he is also reduced. So, Mara is rejoicing and dances with his six evils.”

“Mara then encounters Buddha, and Mara tries to tempt Buddha, though Buddha lays his hand on the earth and the evils are destroyed.” 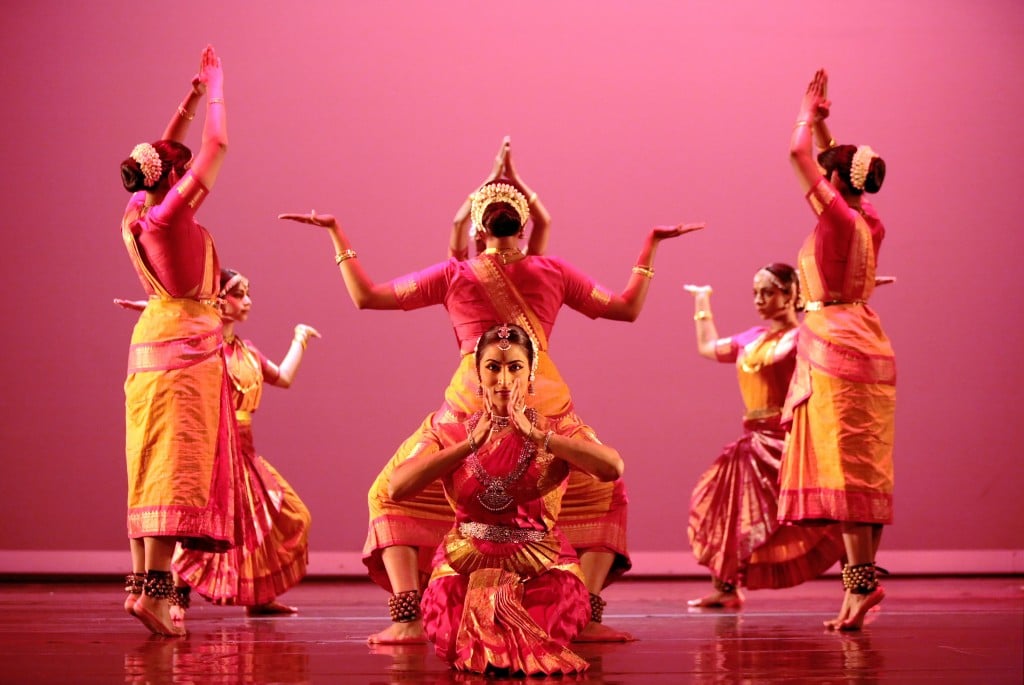 The last piece on the program, “Sita in Reflection,” depicts Sita, a heroine of the Ramayana, in exile.

“Sita is married to Rama, who was an incarnation of Vishnu and an ideal King. But she was abducted by an evil king, the ten-headed Ravana,” Rajagopalan said. “He kept her in his palace for many years until Rama comes with his monkey god Hanuman, fighting Ravana and rescuing Sita back.”

Though Rama has saved Sita from Ravana, he “hesitates to take Sita back, because he thinks she has been with Ravana for so long that she might no longer be pure,” she said. “Rama makes her go through a test of fire to ensure she is pure. Though, later when she is with children, Rama hears rumors in his kingdom that she could not be pure, and so he sends her away to the forest.”

The dance depicts “Sita in exile, reminiscing. It’s sad, but sadness also brings out different colors as she fondly remembers the past. She asks, ‘Is this the same Rama, who sent me away to the forest, who once fell in love with me in the garden?’” she said.

“Ultimately, she finds compassion in her heart, understanding that there must be some reason why Rama acted this way. Still, it ends on a bit of a sad note. In the Ramayana, Sita is very brave. Rama wants her back but she does not go back. According to legend, the earth opened up, and she goes back to the earth because she came from the earth.”

Bringing Bharatanatyam Back to Its Roots and into the Community 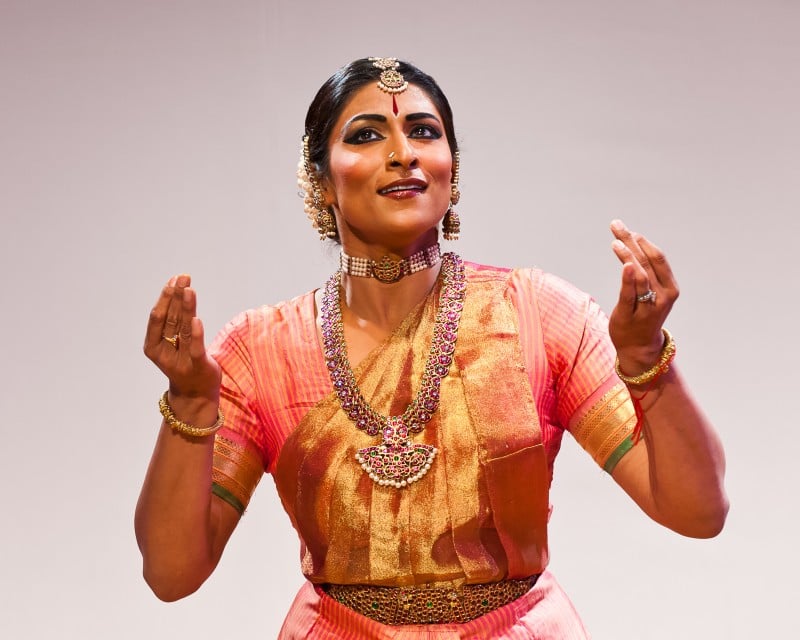 Natya Dance Theater, like many Bharatanatyam companies, does not perform in temples. Still, the act of dancing is always devotional. Rajagopalan expressed frustrations that often the spiritual aspects of this ancient art are lost on modern audiences.

“A lot of times in the West, they only talk about the costumes,” she said. “They don’t see the difference between the dance and the costumes. They could be watching a bad Bharatanatyam dancer with bad technique. You wouldn’t say that of a ballet dancer or a modern dancer, the focus isn’t on the costume.”

Besides presenting performances like Varna, Natya Dance Theater has an academy to train the next generation of dancers and offers workshops to those curious to experience the art form for the first time.

Later this season, Natya presents its second collaboration with the Chicago Symphony Orchestra in a family-friendly program called The Elephant King and the Mice.

Rajagopalan said the company’s first collaboration with the CSO years ago stretched her and the dancers. “There was a lot we had to learn about Western music. I didn’t understand how the music changes key and tempo, since our music does not really change like that. But these kinds of cross-cultural collaborations are good learning experiences for everyone involved.”