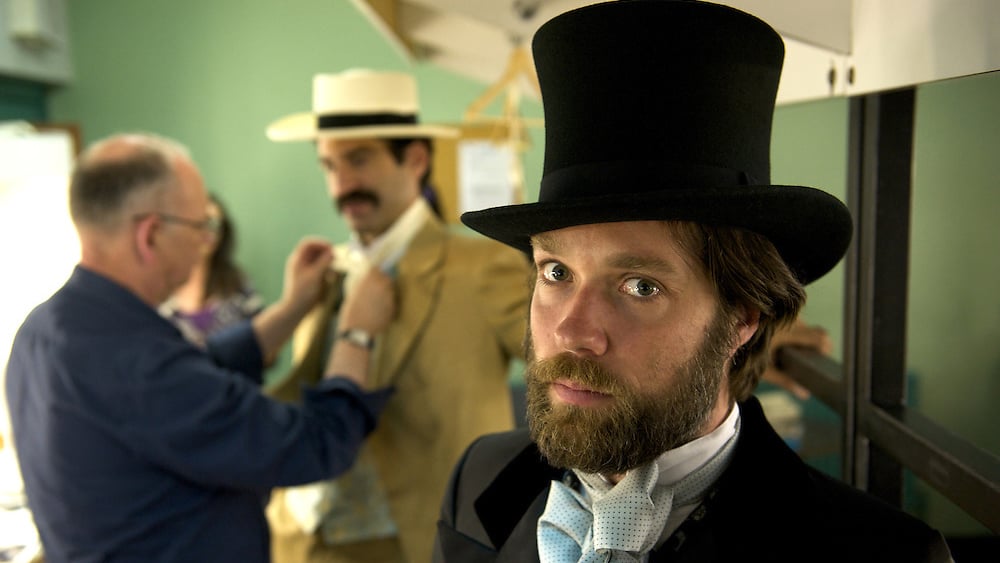 Rufus Wainwright costumed as Giuseppe Verdi with his husband, Jörn Weisbrodt, dressed as Puccini, in the background (Photo: Howard Barlow)

Opera has always been important to composer Rufus Wainwright, though many know him as the man behind the piano crooning confessional songs. If you listen closely, you can hear hints of French mélodie and even references to Verdi in his chart-topping hits.

Wainwright began composing his first opera, Prima Donna, because the Metropolitan Opera was interested in commissioning the work from him. He began composing in 2008, but severed ties with the company after disputes arose over the language for the libretto. Wainwright insisted the opera be written in French, while the Metropolitan Opera demanded that the opera be in English. In addition, Wainwright hoped the opera would premiere in 2009, though the Met could not schedule the premiere until 2014, according to a report in New York Times.

Prima Donna had its world premiere in 2009 at the Palace Theatre as part of the Manchester International Festival and was recently recorded. We spoke with Wainwright about his first opera and operas that influenced him.

Rufus Wainwright: For me, Verdi is very influential. I’m not sure how much the music itself is Verdian, except for the Overture, which is a direct quote from La traviata. But certainly the subject matter of a woman coming to terms with her own mortality is similar. My character doesn’t die at the end, she just stops singing (which for some performers, those things are kind of synonymous!).

It does take place in Paris, inside her apartment. So it has this kind of claustrophobic feel which La traviata so wonderfully encapsulates, especially near the end of the opera. So, Verdi and La traviata were one of the main influences on my own opera. 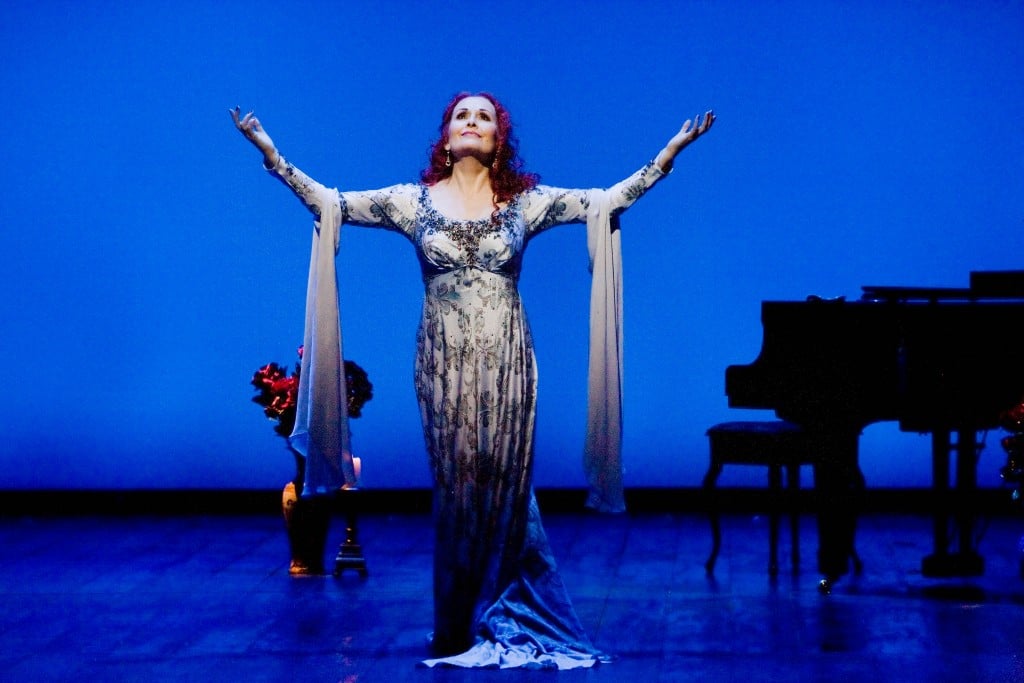 More musically imbued in the opera is Richard Strauss. And for a Strauss opera, I’d probably pick Capriccio because the end of my opera is directly related to Capriccio. The prima donna is alone on stage for quite a long time both singing but also there are musical interludes.

Strauss for me is a great inspiration because he just did what he wanted to do. I love the idea that he started out totally scandalizing the world and being this hard-hitting avant-garde composer at the time. And then he just wrote the music that he wanted to write. And it’s all so beautiful, and so wonderful. So I admire his tenacity in doing what he wanted to do, and also musically I think I’m heavily influenced by him as well.

If I could be any French opera composer, I would probably be Massenet ’cause he’s awesome and because for me he straddles that operatic question: is this for the people or is this for the intellectuals? I don’t know if he ever gets as deep as Verdi or as deep as Strauss in the metaphysical mire. But there are so many shades that emanate from his work and some of them are so raw and so kind of profound, and then other times there’re these incredibly accessible and seductive melodies that he brings in. So, if I had to consider myself akin to one French composer it would be Massenet, and I’m a big fan of Thaïs. 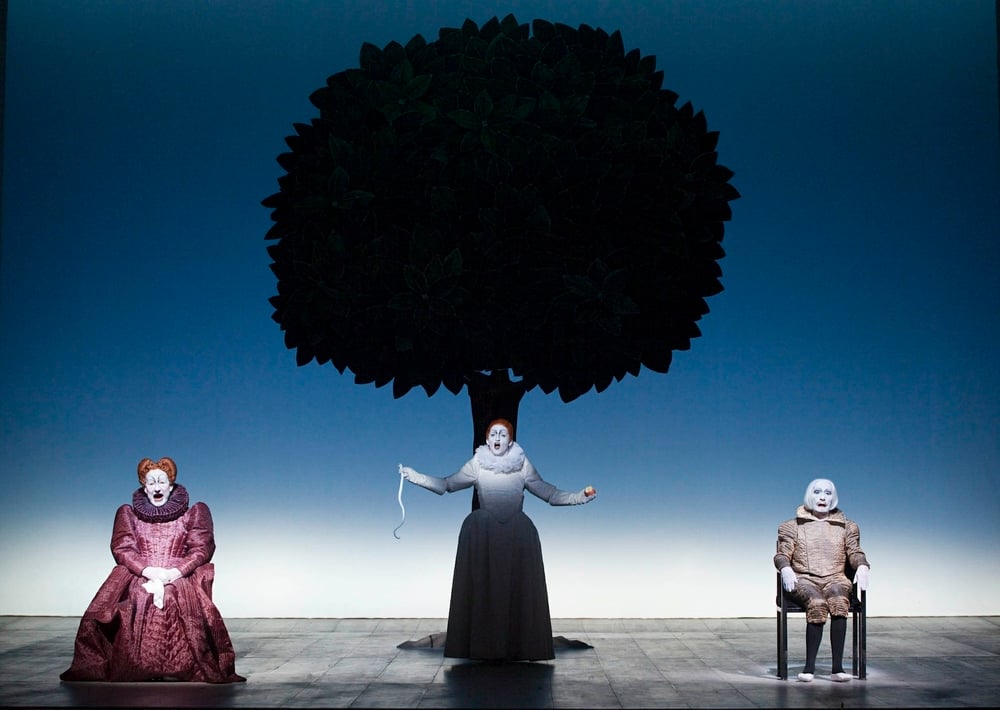 Shakespeare’s Sonnets, directed by Robert Wilson and performed by the Berliner Ensemble with music by Rufus Wainwright

WFMT: I saw your production of Shakespeare’s Sonnets at the Brooklyn Academy of Music last season — can you tell us about that project?

Wainwright: I did the Sonnets before Prima Donna and arguably kind of simultaneously. I had never done anything for the theatre and I received this commission originally from the Met to do Prima Donna, and I thought, “I should probably try something beforehand.” And I got this offer from Bob – Robert Wilson – with the Berliner Ensemble and I thought that would be this little side project. But of course the gravity of Shakespeare, and Robert Wilson, and the Berliner Ensemble… it did become this incredibly challenging piece.

In a lot of ways, Robert Wilson helped me a lot. He informed me as a director in so many ways about being true to your style and also about being true to what the play or the piece of music needs at that time – timing essentially. So I learned that as I was composing Prima Donna.  I don’t know how the pieces are related physically, but having that kind of intense encounter with the stage that I did before Prima Donna certainly toughened me up for the experience of opera – because it’s a jungle out there!

WFMT: What are other operas or composers that have influenced you in your theatrical work?

Wainwright: Operas for me of great importance early on were Don Carlos by Verdi – that was a big one – and also Tannhäuser by Wagner and Salome. Salome was like my punk rock opera that I would scare fellow boarding school students with! I was doing the dance of the seven veils while they were getting ready for the lacrosse game.

WFMT: I bet you were!

Wainwright: Ha! Ha! Ha! There’s always The Makropulos Case. I hadn’t seen that until quite recently in San Francisco with Karita Mattila – that completely blew my mind. She was great in that! At one point during the middle of my operatic journey, I was with my mother and we went to La Scala for the first time and we saw Armide by Gluck. We had no idea what to expect, I didn’t know what to expect. 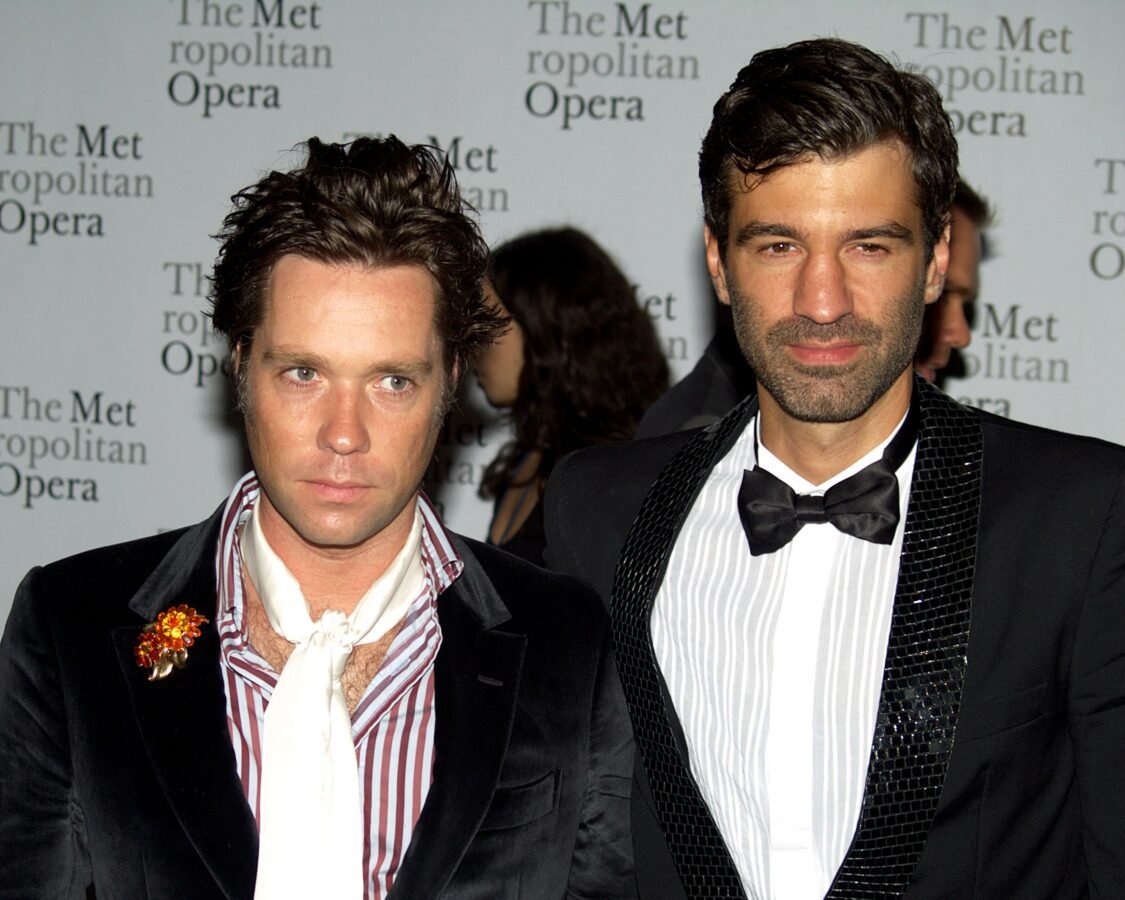 Wainwright and his husband, German arts administrator Jörn Weisbrodt, in 2010 at the Metropolitan Opera. (Photo: David Shankbone, CC BY)

Wainwright: Yeah! So we sat there and at first we thought, “This is going to be kind of boring. Maybe we should leave.” Then we just stuck in there for like two seconds and it was absolutely incredible. I think it was conducted by Muti. It was an amazing night at the theater. My husband is German and he really knows his Wagner top to bottom. We went to Bayreuth and we saw Parsifal twice – only at Bayreuth of course. So I’ve dipped into that chalice.

WFMT: Who are some living composers you admire?

Wainwright: I’m a sucker for Philip Glass still. I love Philip, he’s with us still, he’s a living legend, and he should be celebrated, and he deserves every ounce of success.”

WFMT: Are there any other living composers you enjoy?

Wainwright: Let’s just keep it at Philip Glass for the moment!”

To learn more about Rufus Wainwright, visit his website.