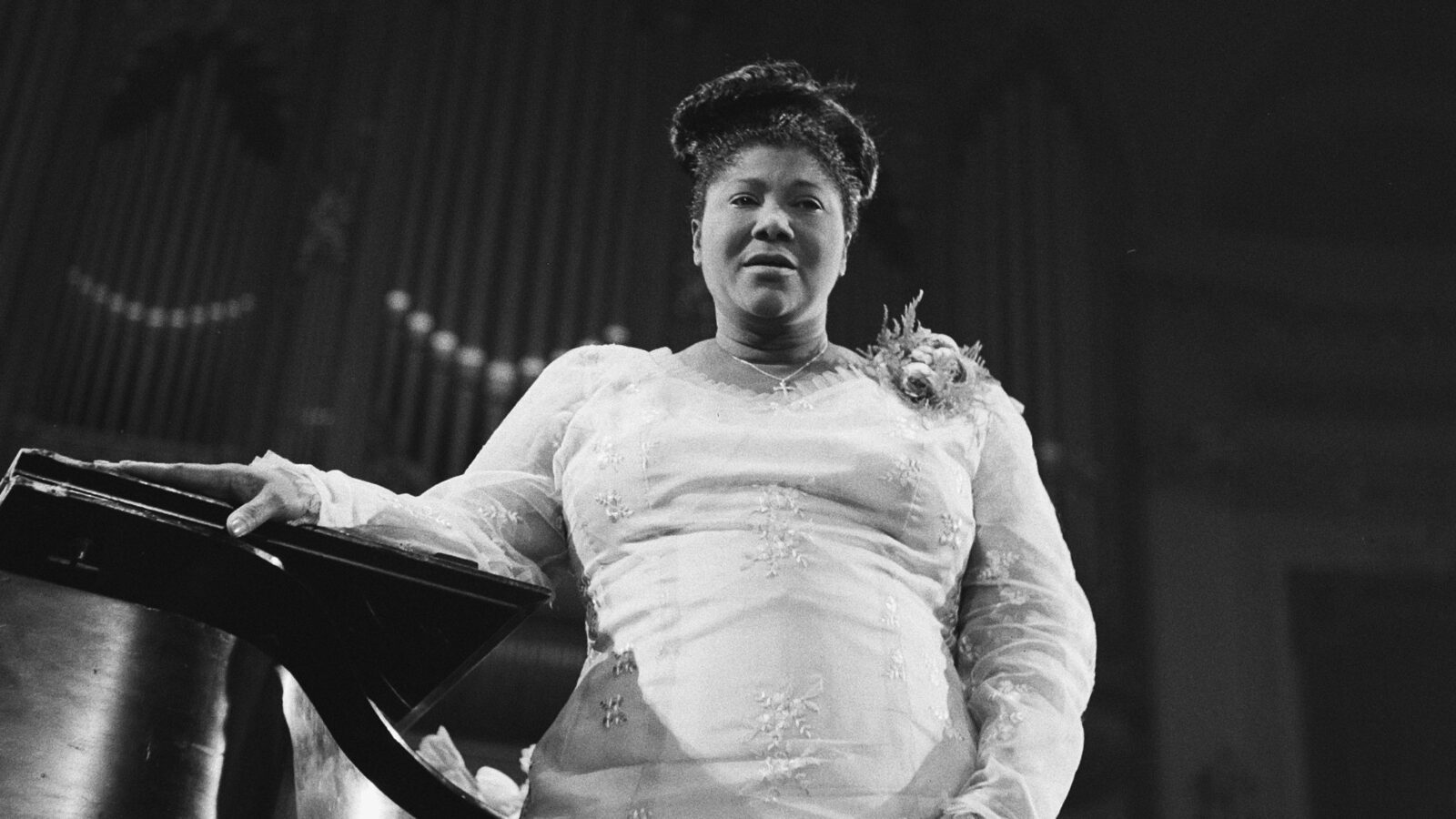 Mahalia Jackson performs in the Royal Concertgebouw in Amsterdam in 1961

Mahalia Jackson is undoubtedly one of the most influential singers of the 20th century. She not only used her incredible contralto to delight music lovers. She also used her voice to call for social justice during the dawn of the Civil Rights movement in the United States. In fact, during the historic March on Washington in 1963, Jackson encouraged Dr. Martin Luther King Jr. to deliver one of his most famous orations.

Jackson, seated behind King, shouted, “Tell them about the dream, Martin!” which prompted him to improvise upon a pre-drafted speech. Clarence B. Jones, an adviser and speech writer for King, watched as King pushed his papers to the side of the lectern, and in a recent interview affirmed  that the most celebrated parts of the speech were delivered extemporaneously.

Before King spoke, he paused and looked out and the enormous crowds on the National Mall in Washington. Jones said to the person seated next to him, “these people out there – they don’t know it, but they are about to go to church.” Were it not for Jackson, known as the “Queen of Gospel,” King might not have taken us to church at all. But musicians and music historians today like Dr. Johari Jabir, associate professor of African-American Studies at the University of Illinois at Chicago, want to change the conversation about Jackson.

“I don’t want her artistry to be marginalized”

“I don’t want her artistry to be marginalized,” Jabir said in a recent interview. “While it is true that she was an incredible gospel singer and a pioneer in the modern gospel movement, she is a black artist. There is an incredible artistic sensibility in her work.”

In honor of Martin Luther King Jr. Day 2017, Jabir participates in Gospel: Mahalia Jackson & the Civil Rights Movement, a panel discussion featuring live performances at the Chicago History Museum on Sunday, January 15th at 5:00 pm. The event is presented in collaboration with Lyric Opera of Chicago and is part of Chicago Voices.

“Jackson was a descendant of the black female singers who came before her including Bessie Smith and Ma Rainey, who sang the blues,” Jabir said. “The blues came out of the black working class tradition of sharecropping, and she inherited that tradition of black music making.”

“She’s part of a tradition of musical talent in black communities and black churches,” Jabir said. But Jabir also feels that too much of the conversation about Jackson’s legacy has focused on aligning it within the context of the African American church, without substantially exploring her role as an artist.

Some of Jabir’s desire to emphasize Jackson’s artistry through his own writing and teaching stems from his reactions to the writings of authors of generations past. “Two black literary figures who wrote about her more than anybody were James Baldwin and Ralph Ellison,” Jabir said.

Ellison famously published an essay “As the Spirit Moves Mahalia” in a 1958 edition of the Saturday Review. In it, he wrote, “The true function of her singing is not simply to entertain, but to prepare the congregation for the minister’s message, to make it receptive to the spirit, and with effects of voice and rhythm to evoke a shared community of experience.”

Ellison reaffirmed some of his statements about Jackson in an interview with WFMT’s own Studs Terkel, which you can hear in full online in the Studs Terkel Radio Archive here. Ellison spoke of Jackson in a broader conversation about the role of the church in African American communities, saying:

“The church was the largest institution which we had and the most vital during slavery. It’s about the only one which could be recognized, and combined…many functions which were not properly those of the white churches of the time.”

“People didn’t have shows. They didn’t have theater. A lot of things were lacking within the Negro community. And among a basically illiterate people, there was a strong liking for drama, for action, and for language.”

“Still today, if you look for the best Negro dramatists, you’ll find that they’re Negro preachers. It takes place on Sunday and it’s a drama which is tied up with man’s deepest fears and hopes and so on.”

“And you had the singing as an integral part of the ceremony, and it was a group thing where everyone took part, usually spurred on by someone who was expert at singing, who was a specialist so to speak, to use the anthropological terms.

“You’d have a person like Mahalia who is a kind of priestess. She was a priestess in the Negro church just as Bessie Smith was a priestess when she sang the blues among those people who really knew them and felt them. She stood there and evoked these emotions, evoked these images, evoked this sense of life. This is a very important thing. Of course, this woman just knocks me out. There’s something that sounds through the voice, there’s something which goes beyond the mere technique and eloquence of phrasing, although she has all of these things.”

Mahalia as “Master of an Art of Singing”

Ellison did write in “As the Spirit Moves Mahalia” that the contralto was a “master of an art of singing,” though his emphasis on discussing her music remains more within anthropological than artistic terms. He claims, “it is an art which was acquired during those years when she sang in the comparative obscurity of the Negro community.” Curiously, despite Ellison’s analysis of Jackson within the framework of African American churches, Jabir said that, “initially, the climate in the church was not welcoming of her style of music.” But what exactly is Jackson’s style? “As I listen to early recordings, I always think it’s a very technically demanding approach. She was very intentional,” Jabir said. “But I’m always struck by how technical her singing is on Christmas with Mahalia Jackson,” released in 1960 by Apollo Records. “She clearly had a much more solid and confident idea about how to use her voice.” “Yes, she had a great instrument and she was very talented,” Jabir said. “She is known in particular for the weight of her voice. It’s a very heavy voice, which helps to put forth force. But it’s also a weight that she controls so that it floats at times. She was very flexible. She could easily access a head voice or create a sound to mimic a train. That contributed to a kind of dark color to her voice that people, and black people in particular, could identify with in that moment in time, given the mood of the nation.” “But there’s more to her artistry than natural talent,” Jabir reminds us. “She was very intentional about her phrasing. She could use her voice very percussively, adding syllables to lengthen words and to great effect.” Though many great singers past and present are known for their ability to add elaborate vocal ornaments to simple melodies, Jackson was, “more minimalist than anything,” Jabir said. “Sometimes there isn’t a melisma until the very end of a song. She doesn’t do a lot to the song, as much as she does through it.”

A Testament About the Black Experience

“Her role as an artist had a political role, too, that connected her to Dr. King,” Jabir explained. “She’s not singing at these rallies just because she can sing. There’s a lot of black people who can sing. Her job is not to get the audience aroused, but to deliver a testament about the black experience through her artistry.”

Jabir is not alone in wanting to change the tune of music history regarding Jackson’s legacies. Josef Sorett, in his recently published book Spirit in the Dark: A Religious History of Racial Aesthetics, agrees that Ellison “reads Mahalia Jackson’s performance in a way that engaged with modern religious tropes that he had elsewhere eschewed and that circled around the problem of the color line in subtle ways.” Participate in current conversations about Jackson’s legacy with Jabir during Gospel: Mahalia Jackson & the Civil Rights Movement this Martin Luther King Jr. weekend. Learn more about the event on the Chicago Voices website.