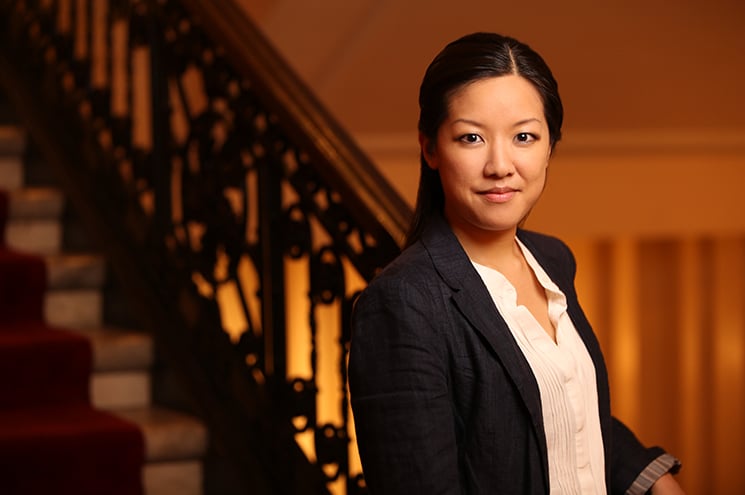 Conductor Erina Yashima is in the middle of her two-year appointment as the Chicago Symphony Orchestra Association’s International Sir Georg Solti Conducting Apprentice. For ten weeks each year, Yashima works directly with Chicago Symphony Orchestra music director Riccardo Muti and leads the Civic Orchestra of Chicago. Before leading Civic in performances of Stravinsky’s The Rite of Spring Wednesday, April 5, 2017, Yashima spoke about her experiences as the Solti Apprentice so far.

I had my first conducting lesson when I was 14 during a pre-college music program at the music university in Hanover, where I grew up. Conducting just resonated immediately with me. I thought, “This is how I can express music in the most immediate, direct way.”

What is it about conducting in particular that resonated with you?

In conducting, there’s a connection between my ideas, my physical expression, and what sound comes out from the musicians. And in an orchestra, you have to motivate people, to bring people together around one idea. I think that’s the most interesting — and also most difficult — part about conducting.

What are some of the most challenging pieces you’ve conducted?

Tonight, we’re going to perform Stravinsky’s Rite of Spring. This is like the Mount Everest for conductors and musicians. I also conducted Rossini’s Cinderella in Italy. That’s a very demanding piece. It sounds very light and vivid and full of life, but the singers have really difficult parts, a lot of coloraturas, very virtuosic.

What are some of the differences between conducting in an orchestra hall and an opera house?

The biggest difference is, of course, the singers. You have to be flexible because the singers are very busy onstage, acting, singing, and moving around. For every element that’s added, there’s one more possibility that can go wrong. Things like that don’t necessarily have to do with the music, but they’re part of the performance. I think opera is more about flexibility and orchestra is more about preparation. In a concert, you’re in a flow and can focus on what you have rehearsed before.

What pieces would you love to conduct on your dream program?

I actually have a list of pieces I would love to conduct. Besides The Rite of Spring, there’s one program I’ve been thinking about: the combination of Beethoven’s Symphony No. 4 and Mahler’s Symphony No. 1. They both start quite similar with a descending fourth, very calm, and end with a very enthusiastic climax. But the stories are different, and they’re told differently. I think they’d mesh really, really well.

What is it like working with maestro Riccardo Muti?

He’s such an inspiration. I’ve never met a personality like his before, not only in terms of musical vision and authority, but also in how he takes care of every detail — a real perfectionist. He’s able to create real experiences, able to communicate in a very intense and intimate way. To observe his work, to have access to the Chicago Symphony Orchestra … I’m very fortunate to be here.

What have you learned most about yourself since becoming the Solti Conducting Apprentice?

First, your work can always be better. Also, you can’t predict all aspects of a concert. You can’t force it. Sometimes, it happens that all the parts of a performance come together — the musicians, the conductor, the piece, the audience, even the weather — and you have an experience you’ll remember your entire life. It’s not possible to have every performance be that special, but to always try — that’s one of the best lessons I could get here.

What is something that some of your musical colleagues might be surprised to learn about you?

I’m a big soccer fan. I support Bayern-Munich. And every colleague who knows that is like, “What? You never even lived in Munich, so why Bayern-Munich?” That’s how I relax after a long day: I watch games and championship weeks and such.

What are some of your favorite things to do when you’re not making music?

One of the things — and thankfully, it comes also with my job — I love traveling. Just to see other natural landscapes, to breathe different air, and meet people with different cultural backgrounds and mentalities — it really enriches my life and artistry.  You can get so much out of switching points of view. Now I see Europe differently than I did before I came to the U.S.

What have been some of your favorite things to discover about Chicago in your time here so far?

First of all, it’s a beautiful city. Every time I cross the bridge over the Chicago River, I’m in awe of the view and the lake and all the skyscrapers. In Germany, save for maybe Frankfurt, we don’t have cities with large skyscrapers. That’s super amazing to see. Another thing I discovered here is baseball. I went to a Cubs game last year, and I was not in town when they won they won the World Series, but I was cheering for them.

What have been some of your favorite (or not so favorite) foods that you’ve tried in Chicago?

I recently tried Chicago-style deep dish pizza for the first time, and I actually liked it more than I expected. Still, I have to say I prefer the Italian style. I love the burgers in Chicago — and in all of the U.S., really — very good quality, always. I do miss European espresso, though.

CSO Announces Winter/Spring 2022 Concerts
10 Woman Conductors You Should Know
After 28 Years, Chicago Symphony Chorus Director Duain Wolfe Gives a 'Joyous Farewell'
Waltzes in a Pandemic: How Vienna Phil Will Continue Its New Year’s Tradition
In Their Own Words: Inspiring Quotes From Classical Artists and Friends Who Died in 2022
Is This the Real Life? Opera Artists on Singing 'Verismo' With Muti & CSO