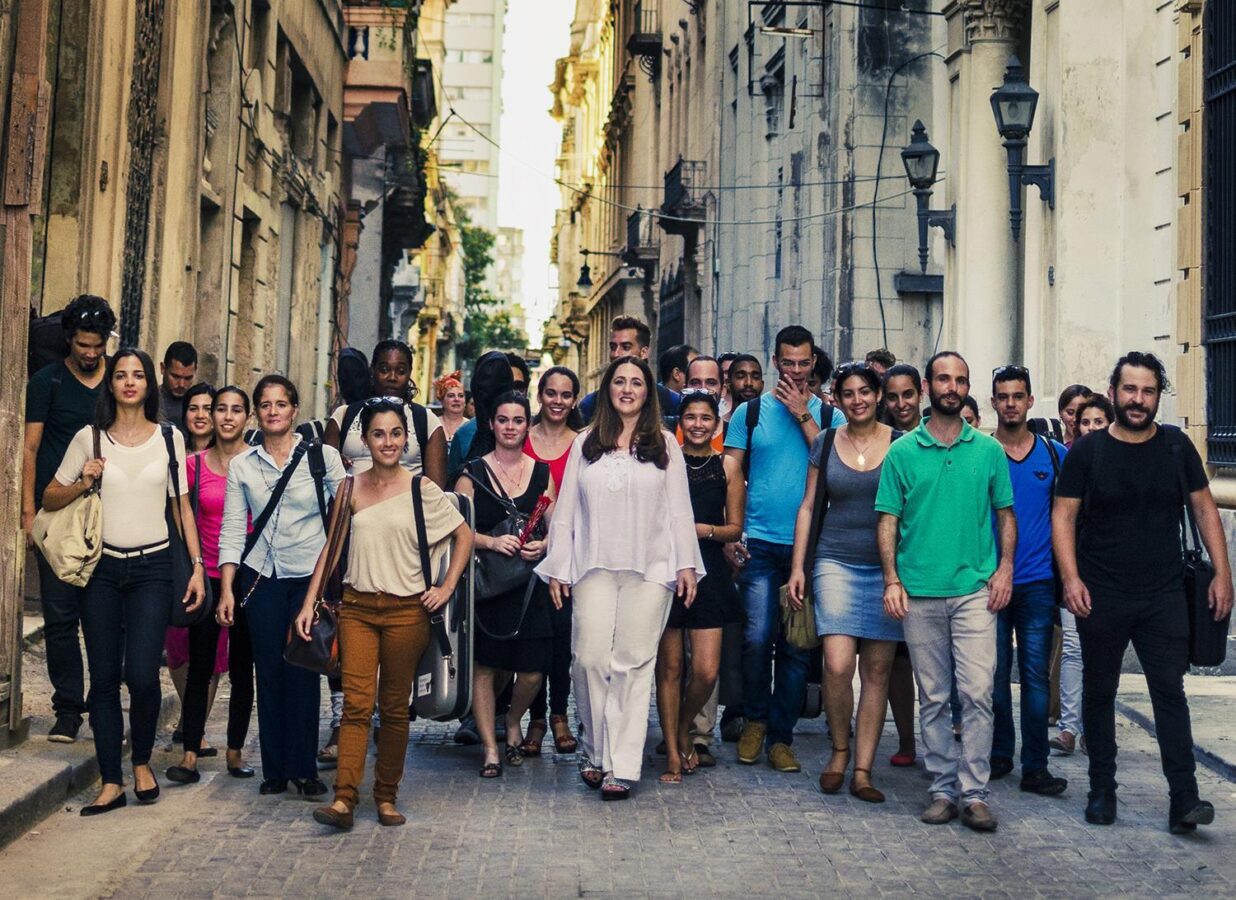 American pianist Simone Dinnerstein just released her latest album, Mozart in Havana, following four years of artistic collaboration in Cuba. She recorded two concertos by Mozart with the Havana Lyceum Orchestra, an ensemble founded in 2009 and composed of music students, recent graduates, and professors. Dinnerstein reflected on her experiences working in Cuba and why it’s important for musicians to foster cross-cultural collaborations in today’s global society.

WFMT: What were some of your impressions of the music of Cuba before you started this project?

Simone Dinnerstein: The teacher that I had growing up as a child was Solomon Mikowsky, and he’s Cuban. He told me a lot about how important music was in Cuba, how people flocked to concerts and wouldn’t let performers leave the stage, and about the great importance of the arts in Cuba.

Other than that – of course I was familiar with more popular Cuban music, like Buena Vista Social Club. But I never had actually heard Cuban classical musicians that are currently living in Cuba, because it’s actually pretty hard to hear them here in the U.S. The recordings that are made in Cuba are not really available here. It wasn’t until 2013, when I went to Cuba, that I actually had an experience of hearing Cuban musicians, meeting them, and collaborating with them.

WFMT: What were some of your first impressions of the island when you arrived during your first visit?

Dinnerstein: I only went to Havana, and I know that it varies quite a lot around the island of Cuba. But it was immediately striking to me that during the drive from the airport to Havana I saw that they really drive 1950s cars. It feels like you’re in some kind of time-warp; it’s very strange. I was really fascinated by that.

And another thing that really struck me was the complete absence of advertising anywhere. There were no billboards; the only billboards I saw were about Cuba, like their famous politicians, but not ads about McDonald’s or anything like that. So it’s actually really surprising when you don’t see any advertising and it makes you think about how much advertising you normally see.

WFMT: Did you have to re-evaluate any preconceived ideas that you may have had about Cuba?

Dinnerstein: Yeah, I think that everything is much more complex when you’re actually there. I felt the same way when I went to Israel. Having just read about it and then actually being there, it was sort of a similar experience of gaining a new awareness of the complexity of the country. In Cuba I was so intrigued and fascinated by the vibrancy of the place.

There was so much music everywhere and people talking and walking on the streets; everybody’s out there walking around and hanging out, and at night you could be out really late, like as late as 3:00 in the morning. I really liked that it felt like people weren’t wasting their time with other things that are distracting and that they’re actually interacting with each other. But there are also a lot of problems in Havana, with the buildings crumbling, the streets in disrepair, and garbage everywhere. There are a lot of contradictions.

WFMT: What has it been like working with the Lyceum Orchestra in Cuba?

Dinnerstein: The first time I went in 2013, I performed the Goldberg Variations. Then I went back again in 2016 and played a Mozart concerto with the Havana Lyceum Orchestra and I was immediately struck by their playing, it was really jaw dropping. We were doing a concert that was an all-Mozart program and they were also doing an overture and a symphony.

I thought that they had such an incredible sound. I couldn’t believe they were getting that sound out of those instruments. They had a really blended tone and their whole approach to playing was full of beautiful phrasing and beautiful spirit. They’re a young orchestra and I think that also contributes to some of the energy in their playing. They’ve also been spending time in Salzburg because they have an affiliation with the Salzburg Mozarteum, and I think that has influenced them. [Read more about the Mozarteum’s Mozart en la Habana festival here.] 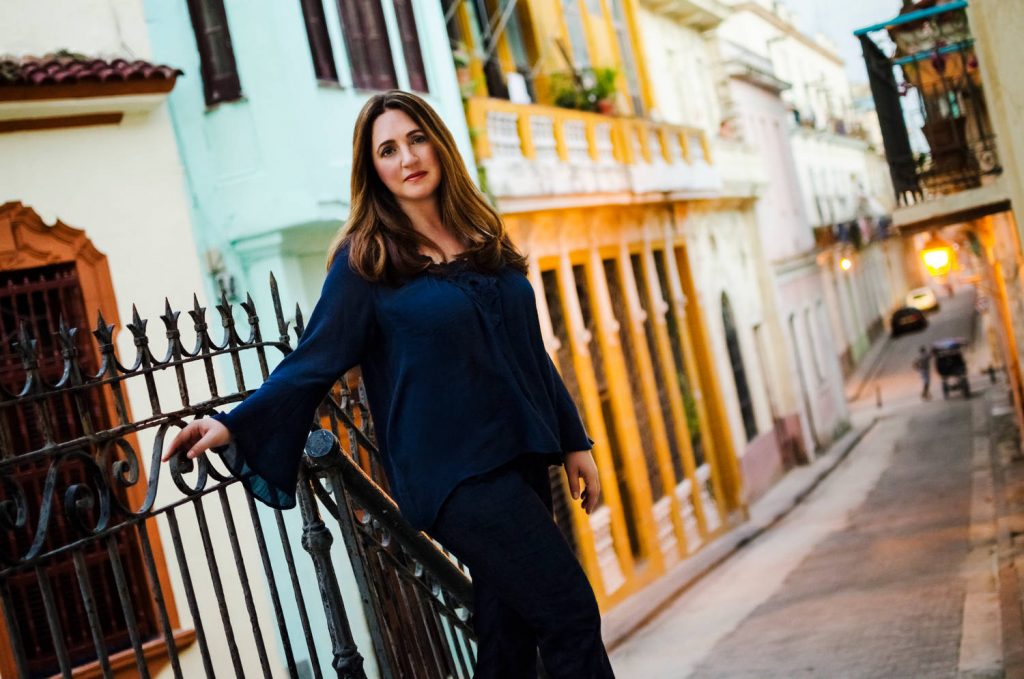 WFMT: Can you tell me about the diverse repertoire you’re playing on an upcoming tour with the orchestra?

Dinnerstein: The Lyceum Orchestra will be coming to the United States for three weeks in June for a tour with me, and we’re doing a few programs. The main program that we’re touring starts with a piece by Fariñas. He was a Cuban composer and we’re doing a piece by him for string orchestra.

Then we’re doing both of the concertos from the recording and then we’re finishing with Copland’s Appalachian Spring. Copland spent quite a lot of time in Cuba, listening to the music and studying their music and he wrote Appalachian Spring a year after he was in Cuba. Interestingly, Cuban composer Carlos Fariñas had studied with Copland at Tanglewood, so there’s an interesting thread running through this program.

WFMT: What have you learned about the music of Cuba during your time working there and throughout your life?

Dinnerstein: Well, I’m not really an expert about the music of Cuba. I know that Solomon is always lamenting about the introduction of amplification. He doesn’t consider amplified music authentically Cuban. I guess when you hear people playing acoustic music in the streets, that’s the most authentic you can get.

WFMT: Why is it important to share culture through music?

Dinnerstein: Unfortunately, we live in a time when people are frightened about foreigners and threatened by them instead of inspired by them, and I think that, for me, bringing this wonderful orchestra to the United States at this time is really important. I think that we have a lot to learn from them and I think that they’re going to be real role models for so many young people. They’ve really gone through lots of challenges, like not having access to good instruments and strings, and they don’t earn a lot of money playing music, but they are some of the most incredible musicians I’ve worked with, and I think that’s really inspiring. So I’m happy that we’re having this musical friendship and that I’m going to be able to share it with American audiences.

Discover more about Simone Dinnerstein‘s work in Cuba and Mozart in Havana on her website.

Grammys 2022: See All the Classical+ Nominees (And Winners)
In Their Own Words: Inspiring Quotes From Classical Artists and Friends Who Died in 2022
How Classically Trained Navajo Pianist & Composer Connor Chee Weaves His Sound
10 Woman Conductors You Should Know
Playlist: Dispelling the Stigma of the Classical Crossover
In the Age of the Visual Album, What Can Opera Learn from Beyoncé?