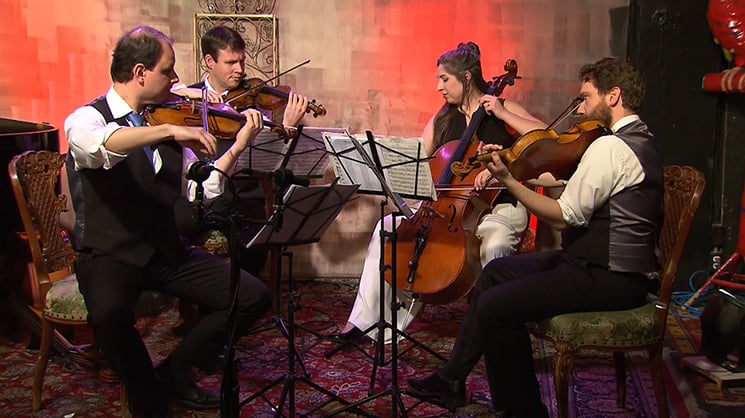 Continuing its Cabaret series, WFMT brought together diverse artists in the Pregnant Buffalo Lounge, a subterranean space at the Chopin Theatre, on Monday, April 17, 2017. WFMT announcer Robbie Ellis hosted the performance and broadcast before a live audience that featured two Chicago-based ensembles, the band Big Sadie and the Kontras Quartet.

The string quartet gets its name from the Afrikaans word kontras, meaning “contrast,” since the musicians enjoy playing seemingly contrasting repertoire even within the same program.

The group played the second movement of Antonín Dvořák’s String Quartet No. 9, Op. 34. Dvořák is known for blending many musical styles and for his fascination with folk traditions in Europe as well as the United States. The second movement of this string quartet is inspired by one of the most important folk dances of the Czech people: the polka. Hear the movement below.