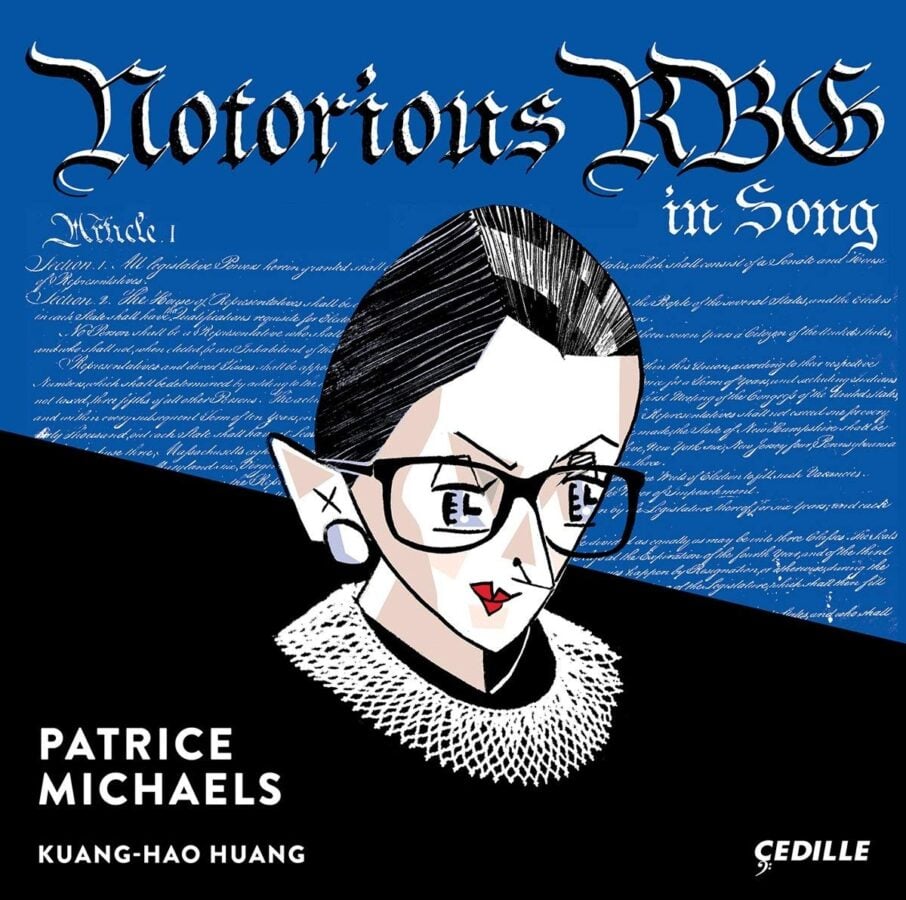 The Notorious RBG in Song, released on Cedille records, features album art by Tom Bachtell, known for his illustrations for The New Yorker

With the Supreme Court very much in the news these days, a Chicago label has released a musical tribute illuminating the personal and professional life of Justice Ruth Bader Ginsburg, who is marking 25 years on the high court. The album’s title playfully recognizes how Ginsburg has become a surprising pop-culture icon, who is known to her fans as “Notorious R.B.G” – a nod to the late rap artist and fellow Brooklynite the Notorious B.I.G.

The album features works by five contemporary American composers celebrating Justice Ginsburg’s family and professional life. The centerpiece is a song cycle, The Long View, which reveals key aspects of her personal life and career through letters, remembrances, conversations, and even court opinions. The composer is Patrice Michaels, whose extensive research into Ginsburg’s life was aided by her unique relationship to the subject: she’s married to Justice Ginsburg’s son, James, founder and president of Chicago’s Cedille Records and the album’s producer. I spoke with Patrice Michaels and James Ginsburg about how this very personal project came together.

JG: It actually goes back to my mother’s 80th birthday. As a present, my sister and I decided to commission songs from three different women composers: Stacy Garrop, Vivian Fung, and my wife, Patrice Michaels. The song that Patrice originally set as just a single work ended up being the genesis for the whole cycle. Once having written one song about Mom, she got the idea of looking at her life from all different angles. That’s when this project really took root.

Patrice, the texts you’re using in the cycle are incredibly diverse, from glimpses into Justice Ginsburg’s personal life to actual excerpts from opinions that she has written in the Supreme Court. So how does the music change as you’re going from text to text?

PM: Because the concept of a portrait is two-sided, it’s both a portrait of Justice Ginsburg, beginning from some of her earlier adult years, and a portrait of the people who are describing her from their own perspectives. The music has to be personally created for each voice. When her husband is speaking, describing the one case that they argued together, the music is really quite different than when her mother is writing her a letter when she’s in her last year of high school at summer camp.

What is the narrative or structure of the piece from beginning to end?

PM: The cycle is organized from the two ends in. So it’s formed by columns that start with a letter written during the Second World War by Justice William Douglas, who is looking for more qualified students of the law to serve as clerks. Most of the men are off to war, so he’s beginning to entertain the idea that women could serve as clerks. He’s asking one of his trusted academic colleagues whether he has any qualified women, and I thought that was a wonderful question to begin the whole process of explaining the character of Ruth Bader Ginsburg. At the end of the cycle, there are two questions that are asked of her. One - what qualities does she think a president should look for in a Supreme Court justice, which she answers both very directly and very personally. Then the second half of the question is about polarization, which is a word that has been on my lips for several years. The way it’s answered at the end of the song cycle is in a purely musical mode with no words at all, describing Justice Ginsburg’s fantasy career as a grand operatic diva.

Running through the cycle are the struggles that she has faced as a woman in the legal world and the fact that she has been at the forefront of equal rights for women. Obviously you felt it was important to express that in various ways.

PM: The miracle of R.B.G is really how her whole life explains what women have been striving for and what can be achieved, in the past century and up through the present. Each of these very personal events somehow illuminates the struggle of feminism and equality.

I would like to focus on one song in the cycle that is particularly moving. It’s an imagined letter from Celia, Justice Ginsburg’s mother, whom she cites as the most in influential woman in her life.

PM: It was the scariest part of this whole process, to imagine that I could be so bold as to write in the voice of her mother. So I went about it quite carefully, first securing Justice Ginsburg’s permission to interview relatives and reading as much as I could about the area where she grew up. Her biographers really helped me with context, and I came up with a day in the summer before her mother passed away. I actually researched the weather that day and what had been happening in the neighborhood and tried to imagine what she would write to her child who had been going to the same summer camp for years. But this year she had been elected camp rabbi and she was practicing a little Mozart piece. Celia knew by this time how desperately ill she was with cancer and imagined that she would not survive long after this letter was written. So the very matter-of-fact, direct kind of things a mom might put in a letter to her daughter are interspersed with Celia’s own thoughts about her past and about Ruth’s future.

Jim, another touching and powerful song on the album is one that was written by Chicago composer Stacy Garrop. It’s based on a farewell note that your father, Martin, wrote shortly before his death in 2010.

JG: My mother and I were in my father’s hospital room in Johns Hopkins and he was expressing his desire to go home. So I was gathering up all the things and came across a yellow legal pad on which my father had hand-written a letter. He never got a chance beyond writing this letter to tell us where he came out but it was quite obvious. Because the one word he was repeating when we were in the hospital room was “home.” You can imagine I thought this should be immortalized, and there is no composer more adept for this kind of pathos than Stacy Garrop.

Your mother has a passion for opera, which she shared with the late Justice Antonin Scalia. Despite their professional differences, they became close friends. That connection inspired Derrick Wang’s “Scalia/Ginsburg,” an opera about the power of friendship in a divided world. You’ve included an aria from the opera as the final selection on the album.

JG: The celebration of friendship is a theme throughout the opera and it really comes home in the final duet – “We are different, we are one.” The selection here is my mother’s entrance aria which is quite a tour de force. The opera starts out with Scalia doing a Handelian rage aria about how the justices are misinterpreting the Constitution.

PM: And RBG comes in and retorts: “Our founders, of course, were great men with a vision, but their culture restricted how far they could go. So, to us, I believe, they bequeath the decision to allow certain meanings to flourish and grow.” And her whole premise in this very long and hilarious aria that starts with a “Carmen” excerpt and goes off into a little jazz waltz and into gospel blues with incredible high notes is the concept of flexible law, exactly the opposite of her friend.