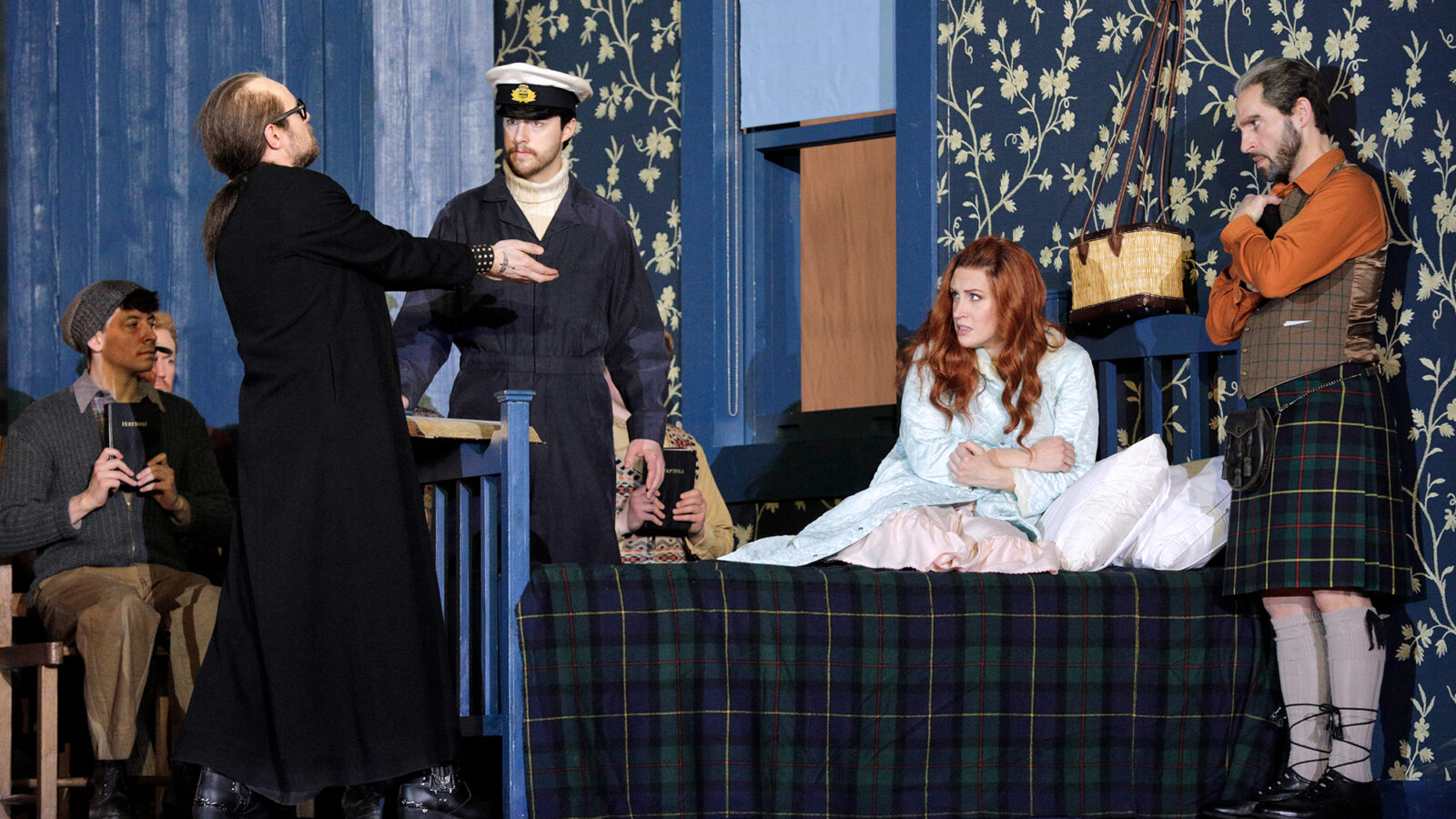 How does an opera written in 1735 hold up today? Lyric Opera of Chicago’s production of George Frideric Handel’s Ariodante presents a contemporary perspective on the nearly 300-year-old Baroque opera, with updated gender and sexual politics to boot. Benjamin Davis directs this revival production, which received its premiere in 2014 at Festival d’Aix-en-Provence under director Richard Jones.

This interpretation takes place on an isolated Scottish island in the 1970s, a close-knit setting with a strong Calvinist heritage.

“We chose to make religious dogma a strong part of the community,” director Benjamin Davis explains. In this interpretation, the two leading women, vivacious Ginevra (Brenda Rae), a noble, and her lady’s maid, Dalinda (Heidi Stober), are both made to suffer on behalf of the conservative, patriarchal community.

Ginevra rejects the sordid Polinesso (Iestyn Davies), disguised as a preacher, and chooses her love, Ariodante (Alice Coote). As retaliation, Polinesso convinces Dalinda to impersonate Ginevra and make Ariodante think that his bride-to-be has betrayed him. Upon witnessing this apparent treachery, Ariodante is driven to suicide, and Ginevra is sentenced to death.

Ariodante is the title character, and has the most music written for him, including the famous, twelve-minute aria “Scherza infida.” But Davis points out that in this depiction, “we put a focus on Ginevra’s experiences. She is a character who is put through the mill by her community for her sense of freedom and imagination. This story seems timely.” With this emphasis on Ginevra, the story shifts from one about a male character being betrayed to one about the malevolence and persecution that a female character faces in a male-dominated society. These repressive traditions are conveyed through a wholly unexpected — and extremely memorable — bit of stagecraft: puppetry! In place of the ballet scenes in conventional stagings of Baroque operas, “the production uses puppetry as an expression from the community of their hopes and fears around the central story integrates an idea of their worldview.” After Ginevra’s fall from grace, the townspeople operate a small puppet to pole dance at a red light district. Humiliated, Ginevra watches this sordid portrayal of herself.

Another radical spin comes with the production’s treatment of Dalinda. Her brutal suffering at the hands of Polinesso is not glossed over or relegated to offstage action. Many operas may feature a servant or maid as a secondary character, but in this interpretation, Dalinda’s social status does not make her character’s pain any less flagrant, or any less important.

Davis suggests that 18th-century paradigms of virtue and gender relations aren’t convincing for modern audiences. “Given what the characters are put through,” he states, “we find these values less palatable.” Even so, he feels that this interpretation stays true to Handel’s story: “We don’t change the text, we don’t change the music. That is what is great about great works of art, they can sustain those interpretations and still be meaningful across generations.”

Ariodante runs until March 17, 2019. For tickets and information, visit lyric.org.