In the eyes of tenor Nicholas Phan, the founding artistic director of the Collaborative Arts Institute of Chicago (CAIC), living composers and the classical music genre of art song both face a similar obstacle: they’re often overlooked when it comes to programming and promoting classical music. The 2019 Collaborative Works Festival aims to address both those problems.

The CAIC was founded in 2010 by Phan and pianists Nicholas Hutchinson and Shannon McGinnis with the mission of promoting the tradition of art song and vocal chamber performance. Phan, who is on the faculty of the DePaul University School of Music’s Voice and Opera Department, states, “Audiences for the repertoire have been dwindling, presenters worldwide are fearful of programming vocal recitals, and there’s been a dearth of opportunities for the genre. We wanted to correct that trajectory.”

Now, in its eighth annual Collaborative Works Festival (September 5-8), CAIC is also furthering its commitment to living composers. Succinctly titled “The Living,” this year’s slate of performances is made up entirely of works by living composers. Opening with a program of Chicago-based composers (Shulamit Ran, Stacy Garrop, Augusta Read Thomas, and Lita Grier), the festival then zooms out for an program of living American composers, then concludes with a recital of works by living composers from around the world. In addition to Phan, the festival features vocalists soprano Lauren Snouffer and countertenor Anthony Roth Costanzo, who will collaborate with an array of musicians, several of whom play in the CSO and the Lyric Opera Orchestra. Over the course of the festival, these artists will perform many works which are sure to be new musical discoveries for its audiences.

WFMT: Why did you choose to build this year’s festival around living composers?

Nicholas Phan: This festival came into being in 2012 because we saw an opportunity to explore different themes in an in-depth way. We saw an opportunity there for us to enrich the audience’s and the artists’ experience so that we could continue to cultivate people’s appreciation of how special art song is.

Each of these festivals’ themes has evolved from the one before. This one came out of the fact that last year, we had our first co-commission of a new work last year by Missy Mazzoli. It got me thinking: if you’re trying to build an audience for art song, you have to underline how it’s relevant today, you have to show that it’s also a living art form. It felt only right and timely to devote an entire festival to things that are happening now and by people who are alive. 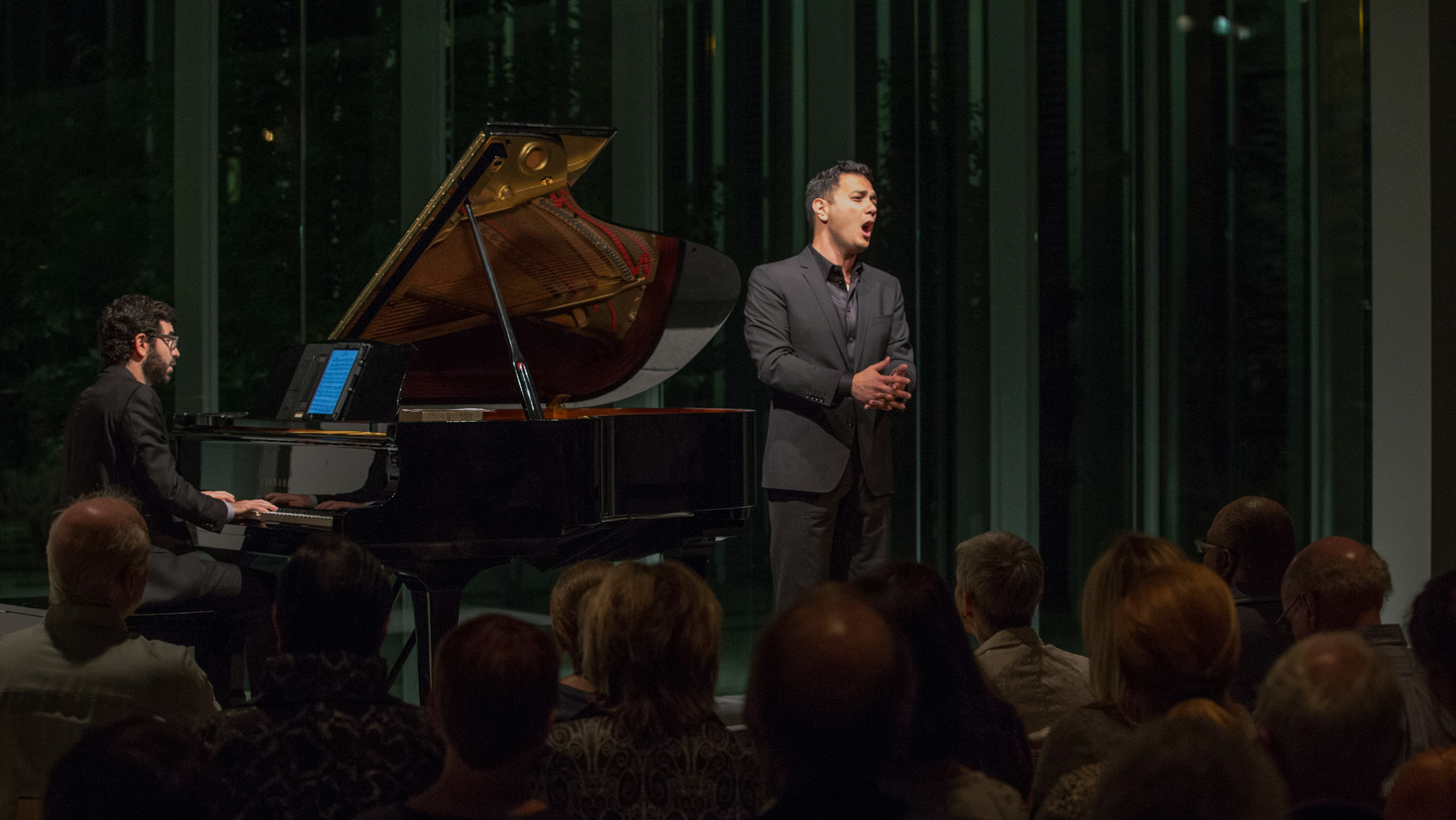 WFMT: As the artistic director and as a performer, can you share how performing works by living composers feels different as a performer rather than the canonical Schubert, for instance?

Phan: Well, the main thing is you can’t call up Franz Schubert and say, “What did you mean in measure 6?” It’s the greatest thing that you can shoot an email off and ask for clarification. You can get immediate feedback from composers, and that is incredible.

I think the other thing that is important as a performer is, when you’re dealing with the music of the people who are passed, it’s often been recorded a ton of times and you have so many different interpretations to refer to. With music of living composers, you’re forced to look at the notes on the page with very fresh eyes. And I think that informs your music making everywhere else. The value of doing contemporary music and new music is that it reminds you to approach all music with a fresh set of expectations or no expectations at all.

WFMT: How did the idea to create an entire program around living Chicago composers arise? Phan: When we settled on this theme, I was immediately drawn to the fact that there’s this great number of composers in Chicago and also that so many of them are internationally-renowned women composers. That was really impressive to me, and so I thought, “What better way to open this whole festival?” I was drawn to that fact — even within the city limits of Chicago, there is such a wide variety of things happening, but there’s still obviously a dialogue going on throughout different composers’ works.

I’m moved by what they’re doing, and I’m excited that they’re all going to get to attend that concert. I’ve actually met a lot of the composers on that program because many of them attend our concerts. Having met them personally and now being able to feature their music and showcase it in this way is so gratifying.

WFMT: Can you tell us about the composers featured in the other two programs?

Phan: Right. I’m proud of the balance of the composers; there’s a large age range there, which I think is also going to be really interesting. I mean, Ned Rorem is, what, 95 years old now? He’s a critical composer to include because he’s one of the most prolific songwriters of American songs.

Later in the weekend, we have a couple of composers who are heavily influenced by pop music, and you start to see the way people incorporate the sounds of now into their own compositions. Specifically, I’m thinking of the composer Errollyn Wallen, whose work will actually close the entire festival. Her range of musical influences is very wide, but she is also a singer-songwriter herself. She is extraordinary and was the first black woman to have been commissioned by the BBC Proms. I feel like we’re introducing a lot of people’s music to this community, which is fantastic.

I think this is the thing with contemporary music: for a lot of these pieces, people get really excited about commissioning something new, and then it gets played two or three times maybe, sometimes only once. Part of what I wanted to do with this weekend of concerts was to give things another hearing. The only way things become part of the standard repertoire is if we make them that way; we have to perform them.

WFMT: What do you hope “The Living” imparts to its audience?

Phan: To hear music by contemporary composers, people who are living with us now and people who are having the life experiences that we are having with our world, I’m hoping will really underline the relevance of this genre of music to our audience members. To hear it from a very diverse crowd of creators that reflect who we are in a more accurate way. I hope that will underline the relevance of this mode of expression in a new way, and in a deeper way, for our audiences.

“The Living,” the 2019 Collaborative Works Festival, will be held from September 5-8, 2019, in venues around Chicago. Festival passes are sold out, but individual tickets are still available for each performance. This interview has been edited for clarity and length.

Nicholas Phan and Shannon McGinnis [Rebroadcast]
The Sounds of Chicago in a Festival of Art Song and Vocal Chamber Music
Paula Kosower and Kuang-Hao Huang
Cora Swenson Lee and Claire-Chung Lim
Grammys 2022: See All the Classical+ Nominees (And Winners)
In Their Own Words: Inspiring Quotes From Classical Artists and Friends Who Died in 2022