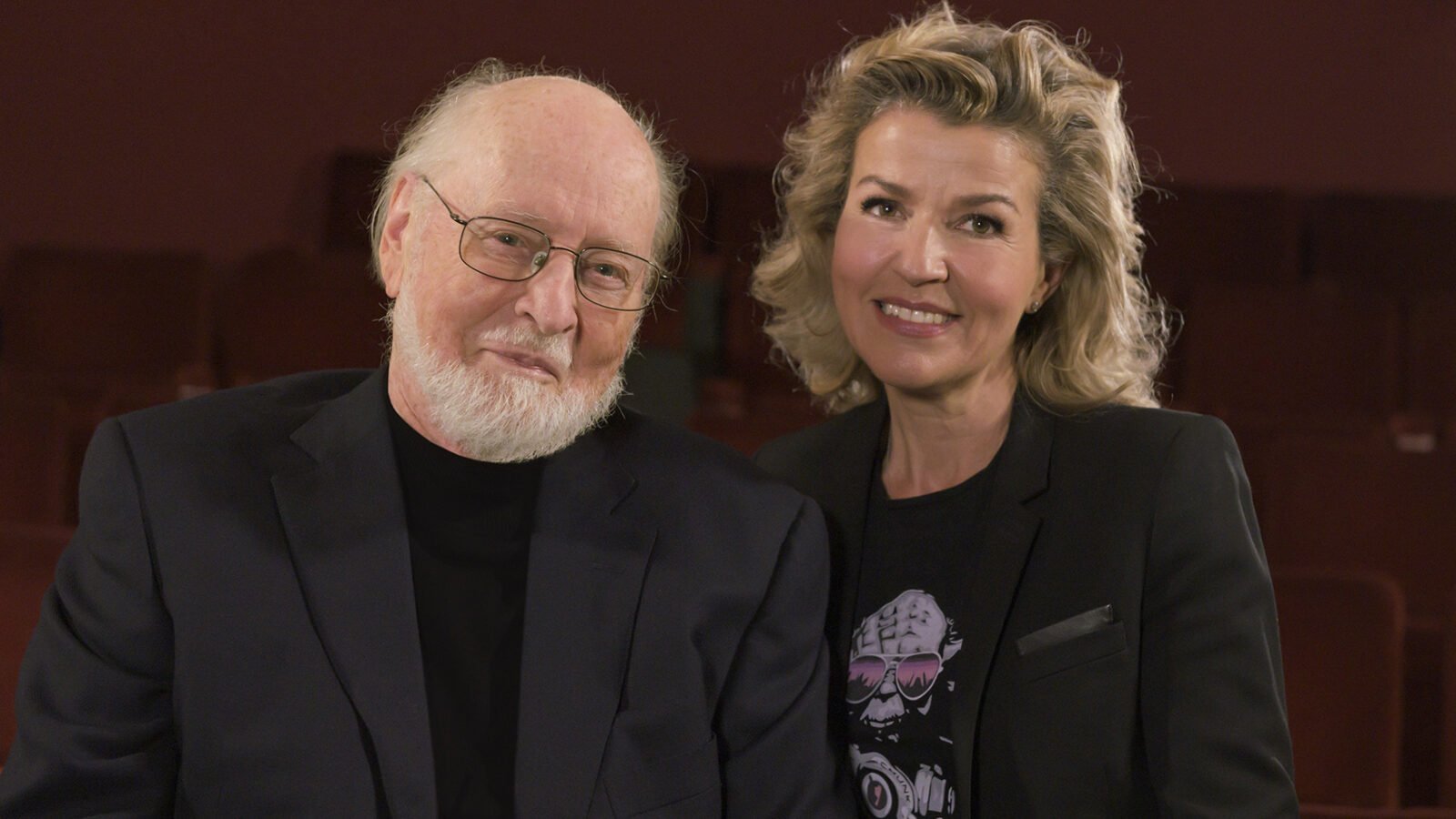 Imagine the scrolling main title of Star Wars or wizards taking flight in Harry Potter without triumphant brass and sweeping strings. These cinematic moments would lose their emotional resonance without the iconic music of John Williams. With 51 Oscar nominations and countless awards, John Williams has defined movie music for a half-century. So what happens when one of the most celebrated film composers teams up with one of today’s foremost violinists?

Anne-Sophie Mutter says that she’s dreamed of collaborating with John Williams for decades. In the new Deutsche-Grammophon album Across the Stars, Williams conducts Mutter and the Recording Arts Orchestra of Los Angeles in selections from some of the composer’s most memorable film scores. These short pieces, which Mutter calls “little violin concerti,” explore the virtuosic capabilities of the instrument, from the blazing, Paganini-esque rendition of Hedwig’s Theme from Harry Potter to the contemplative, melancholy interpretation of Sayuri’s Theme from Memoirs of a Geisha.

In a recent interview with WFMT, Mutter discusses her long-time admiration of John Williams’ scores, how she convinced the composer to collaborate (it involves some German gingerbread), and her thoughts on the importance of film music.

WFMT: Bring us to that moment when you first heard a John Williams score.

Anne-Sophie Mutter: That was a prominent moment in my life. I grew up at the foot of the Black Forest, where Germany, Switzerland, and France meet. Other than music and sports, there really wasn’t much happening in my early youth. But there was a cinema, thanks to God, and in 1978, Star Wars came to the Black Forest. I remember as if it were yesterday, the opening theme of Star Wars. It opened a new understanding about music, about heroism, about leitmotifs – ever since, I’ve been a John Williams fan.

WFMT: How did this collaboration with John begin?

Mutter: I met John Williams about seven or eight years ago at the Tanglewood Festival. Deep down, I’d been dreaming about a violin concerto by John Williams for quite a long time. But I didn’t dare to be that direct! So I just asked him if one day he could write a few bars for me. He very charmingly turned me down and said, “I’m terribly busy.” I of course understood.

But at Christmas, I sent him a box of German gingerbread — just totally innocently! Which he took very charmingly as a reminder for the few bars. [Laughs] Gingerbreads and bars were exchanged!

During that exchange of emails and letters, I also confessed that I was a great admirer of his film works. I asked him if he would possibly consider rewriting Across the Stars for me or even Leia’s Theme [from Star Wars] or anything else! … He thought that maybe he would rewrite two themes, and in the end, [he rewrote what] turned out to be almost all of the new album.

Some of them have turned into little violin concerti. Think of the Carmen Fantasy for example. If you look at Hedwig’s Theme from Harry Potter, it really is in itself a masterpiece with a cadenza in the middle. You do of course recognize the iconic themes, but it is a totally new, as he says, emotional experience. WFMT: Film scores are often under time constraints — the music has to align with the images on screen. Since there was not a film, how did this influence your interpretation of the music?

Mutter: What was wonderful was that there was a lot of freedom in the way we recorded and in the choice of tempi… It’s a different experience because there is no film, and Yoda’s Theme is suddenly played by the violin. That in itself may change the choice of tempo. Yoda is, after all, this timeless, little superman with a violin under his robe! That’s his secret weapon! [Laughs]

I must say the three days we spent together, weeks before the recording took place in Hollywood, were some of the most exciting days in my life because I learned a tremendous amount about phrasing. I was also fascinated by the fact that John Williams is rewriting his scores constantly … even if it is something like the ending note of a melody, if it’s a punctuated quarter note or in fact a half note … it is utterly fascinating how much detail. The time and dedication John Williams has put into it is second to none.

WFMT: You also had the opportunity to meet Steven Spielberg. What were some of those conversations with him like?

Mutter: I did meet Steven when we were just rehearing Remembrances [from Schindler’s List], which I adore. Out of the corner of my eye, I saw the door opening in the studio, and Steven Spielberg was standing there. I thought, “No, please, this is too much!” We had a wonderful conversation about Leonard Bernstein’s West Side Story, which he is putting to film. It was just truly inspiring to meet a filmmaker who is so deeply interested and knowledgeable about music. Seeing these giants collaborate over 40 years together is just wonderful.

Mutter: When it comes to film scores by John Williams, I am fascinated by the scope of his understanding of different cultural backgrounds and their way of composing. That is something that I cherish here, [in this album,] we have Memoirs of a Geisha and Schindler’s List. These are different worlds of writing and expressing music. That is genius — we need more of that on the classical stage.

I guess it would also help us attract an audience that might possibly cross over to Mozart or Beethoven. Even if they don’t, it’s fabulous music. Let’s enjoy it! It’s really music like Strauss’ Ein Heldenleben; it’s program music.

I think film music is looked down upon because we live in a society where [it’s] used in the background. We automatically assume that something is mingling along while we’re watching the film, totally underestimating how, as John Williams puts it, [the music is] “pushing the acceleration button.” In a musical sense, [a score] helps the film thrive.

I’m convinced [this music] has such a longevity because of the leitmotifs — musically speaking, all of these characters have such strong personas. We hear Princess Leia emerging in the music; that has carried these characters over a period of decades. My children love John Williams; that is a great achievement. Who can really say that? I hope this is not my last word in my collaboration with the great John Williams, so stay tuned!

Video | Anne-Sophie Mutter Shares What Every Musician Should Know That They Can’t Learn in School
'Get Out' Composer Michael Abels Brings His Horror Score Into the Concert Hall [Video]
Meet the Conductor Who’s Resurrecting Maria Callas (in Hologram Form)
At the intersection of Philip Glass and Coldplay: How Emmy-winning composer John Lunn created the sound of Downton Abbey
In the Age of the Visual Album, What Can Opera Learn from Beyoncé?
See Photo Highlights from WFMT's 70th Anniversary Day of Celebration