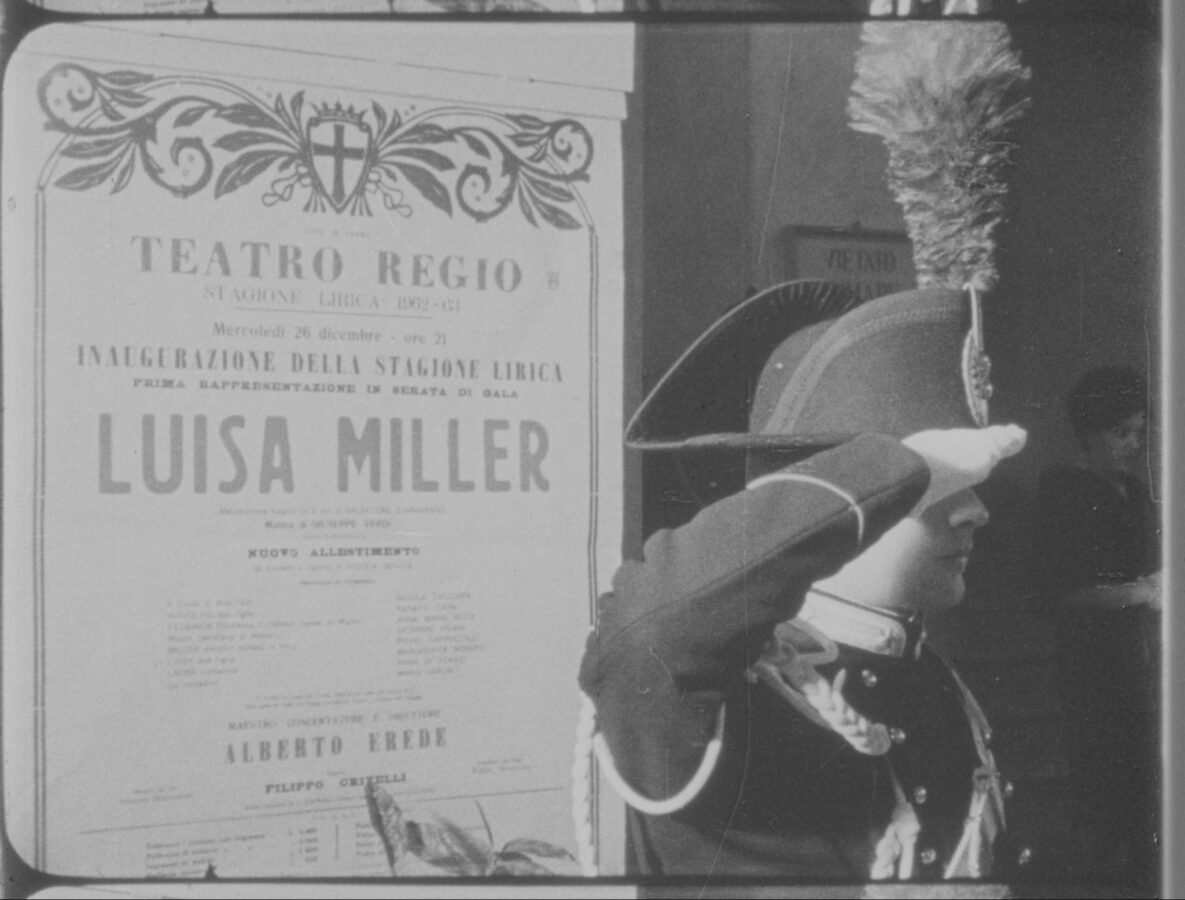 Audiences will be irate this weekend at the Siskel Center. No, not the people in the theater, but the onscreen audiences portrayed in In the Mouth of the Wolf (In bocca al lupo). The lost, made-for-TV documentary from 1963 depicts the infamously fanatical opera culture of Parma, Italy through the lens of a troubled production of Verdi’s Luisa Miller. And we have a tumultuous 2009 performance of Rigoletto to thank for the rediscovery of this film. To describe the film’s self-appointed ambassador, journalist and filmmaker August Ventura, as a “fan” of Giuseppe Verdi would be almost a comic understatement — the New Yorker has dedicated much of his life and career to the Italian titan of opera. So when he got the chance to attend Festival Verdi, he jumped at it. The annual opera festival takes place in Teatro Regio in Verdi’s adopted hometown of Parma, which is notorious for its extremely particular, sometimes volatile audiences and zealous opera culture. Ventura recounts multiple tales of unlucky singers being run out of town by disgruntled operagoing Parmigiani.

At the festival, Ventura attended a performance of Rigoletto, which that night featured the secondary cast, an unwelcome change to some in the audience. “When they got to the ‘Sì, vendetta’ duet, I was hearing things in the audience,” Ventura describes, “I’m thinking, ‘What is going on?’ Then I realized the man next to me is mumbling under his breath. He’s part of this chorus of voices that is passive-aggressively letting the audience, and possibly the performers, know that he’s not liking this performance.”

The duet traditionally ends with Gilda and Rigoletto sharing an extended high note (though Ventura is quick to point out that this is not how Verdi wrote it: it’s a performance tradition). At this performance, something unthinkable happened: “Rigoletto cut his note off maybe a beat or two before Gilda did.” Needless to say, the audience was not happy.

As boos broke out, the Rigoletto gave a sheepish bow, but only at the insistence of his Gilda. Then, Ventura recounts, “everything turned silent. The orchestra started up again, and they sang the duet again. Whether it was being called for an encore or an encore with the proviso that ‘You’d better get it right this time,’ I’ll never know. But they sang it, he nailed that final note. And there was this applause like I’d never heard.” With a moving sincerity, Ventura finishes his story: “My life changed in that moment. I’ve been loving this art form for so long, but I never experienced it as something extra. As a contact sport. As something that all these Parmigiani are carrying with them. As a living culture that you’d better get right.”

This same Parmigiani fervor for opera sets the stakes in In the Mouth of the Wolf, which Ventura is in Chicago to screen, and which he went to great lengths to locate.

The film aired only once before fading into obscurity. It portrays legends Margherita Roberti, Piero Cappuccilli, Renato Cioni, and Maestro Alberto Erede in rehearsal in Parma for Luisa Miller (which, as coincidence would have it, is currently being performed at Lyric Opera of Chicago). The singers are understandably anxious, because as Ventura has established, Pargimiani audiences “don’t hold back when it’s time to boo.” But, in his eyes, that’s just because of the degree to which they embrace the art form of opera.

Ventura explains that the film would have remained lost if not for the turbulent Rigoletto performance. After that eruption of applause at Teatro Regio, Ventura became more fascinated with Parma’s remarkable opera culture, which became the subject of a few of his articles for Opera News magazine. He even went so far as to produce a documentary about an exclusive fraternity in Parma dedicated to celebrating and upholding the operas of Verdi.

While producing his documentary, Ventura got put on the trail of In the Mouth of the Wolf. He eventually tracked down Margherita Roberti, the only living cast member of the fraught Luisa Miller portrayed in the film. Roberti still had a pristine print of the original film, which she bestowed to Ventura. He was overcome.

The Gene Siskel Film Center will screen the restored film with Ventura contributing live commentary and context for the film’s production, rediscovery, and subject matter. For Verdi enthusiasts and opera aficionados alike, the film offers a window into the buzz and frenzy around opera from a half-century ago. Even though Ventura believes that opera occupies a different cultural space today than it did then, he feels strongly that the operas themselves, and particularly, the works of one Giuseppe Verdi, are timeless. That’s because, as he concludes, “with Verdi, I don’t think anyone gets us closer to what it means to be human.”

With live commentary by August Ventura, the Gene Siskel Film Center screens In the Mouth of the Wolf Saturday, October 19 at 7:30 pm. Visit siskelfilmcenter.org for ticketing and information.

In the Age of the Visual Album, What Can Opera Learn from Beyoncé?
14 Chicago Film Fest Screenings Music Lovers Won't Want To Miss
How Kamala Sankaram Brings New Audiences, Stories to Opera
How Classically Trained Navajo Pianist & Composer Connor Chee Weaves His Sound
Music, Fable, and Batman: Why Beethoven's Story Makes for a Perfect Comic Book
Enrique Mazzola on Returning to the Stage, Taking the Reins at Lyric