To conceal that the book’s author was a woman, Charlotte Brontë’s Jane Eyre was first published in 1847 under a pen name, Currer Bell. Choreographer Cathy Marston, whose ballet adaptation of the novel which is currently being performed by Joffrey Ballet, feels the book was revolutionary: “When [Brontë] wrote  Jane Eyre, it truly was groundbreaking for a woman to write about her emotions and station in life with such honesty.”

Marston, who choreographed Jane Eyre for England’s Northern Ballet in 2016, adds, “It was one of the first novels written in the first person — it’s in Jane’s voice… It made me really want to view the entire story through her eyes.”

Many ballets (Giselle and Swan Lake, for instance) are led by female characters, but few of these roles have such a great degree of complexity and autonomy as Jane. The ballet features music by Fanny Mendelssohn, another 19th-century woman whose career was hindered on account of her gender, as well as her brother Felix Mendelssohn. Music by Schubert and original compositions by Philip Feeney round out the hybrid score.

WFMT: At the beginning of the process, what was your familiarity with the book and with other adaptations?

Cathy Marston: I grew up on literature. Both of my parents were English teachers and we read a lot… One of my first vivid memories is from an old BBC film version [of Jane Eyre] which ended with an image of Jane and Rochester embracing under a tree. I think many people have that image in their head because they do fall in love and are together at the end, but this is Jane’s story.

I also really like the 2011 film version directed by Cary Fukunaga. It tells Jane’s story as a flashback, which lends itself well to a ballet adaptation. In the ballet, I have an adult Jane and a younger Jane that dances as she is remembering her past. This way we can begin at an exciting, dramatic point in the story and then add in the backstory. I didn’t want to start the ballet in an orphanage.

Amanda Assucena: Before we started [rehearsals,] I was in the middle of reading the book and getting to know Jane’s mind and intellect. We had access to videos of previous performances of the ballet as well, so we could familiarize ourselves with Cathy’s movement. I tried to get as much of Jane’s thoughts and ambitions into my body and I wanted that to read in each movement in the ballet. WFMT: How did Jane’s character influence the ballet’s choreography and general style of movement?

Assucena: Cathy’s choreography comes from a narrative source. The storytelling is in every single movement in the ballet. I believe it really gives the audience a sense of what is going on inside each character’s mind. When you watch the ballet, it feels like you’ve known those characters for a long time.

Marston: I really draw inspiration from the words and translate them into movement so that every movement you will see on stage has a very specific meaning and intention… All of the movement is about the intention rather than about the technique. The technique is only there to underpin the emotion or the narrative the dancers are trying to express.

WFMT: How did you land on using the music of Fanny Mendelssohn for the piece?

Marston: I worked with [composer] Philip Feeney on the score for Jane Eyre. He had the great idea that we should anchor the ballet with music by Fanny Mendelssohn, who is Felix Mendelssohn’s sister. She was a contemporary of the Brontë sisters, but like the Brontë sisters, because she’s female, was perhaps not recognized as much as she should’ve been but is now getting more recognition.

Grace Kim: The simplicity and timeless quality of this classical repertoire complements the atmosphere of the ballet. I especially enjoy playing the beautiful and heartbreaking melodies found in Fanny Mendelssohn’s Das Jahr that tells the story of Jane’s hardships and unspoken dreams.

Marston: [With the works of Felix Mendelssohn and Schubert] these pieces of classical music which set the world and time of Jane Eyre’s story are combined with new music by Philip Feeney. There is a beautiful pas de deux (during the proposal scene) that is entirely Philip’s music. Philip’s great skill is weaving it all together into one piece. 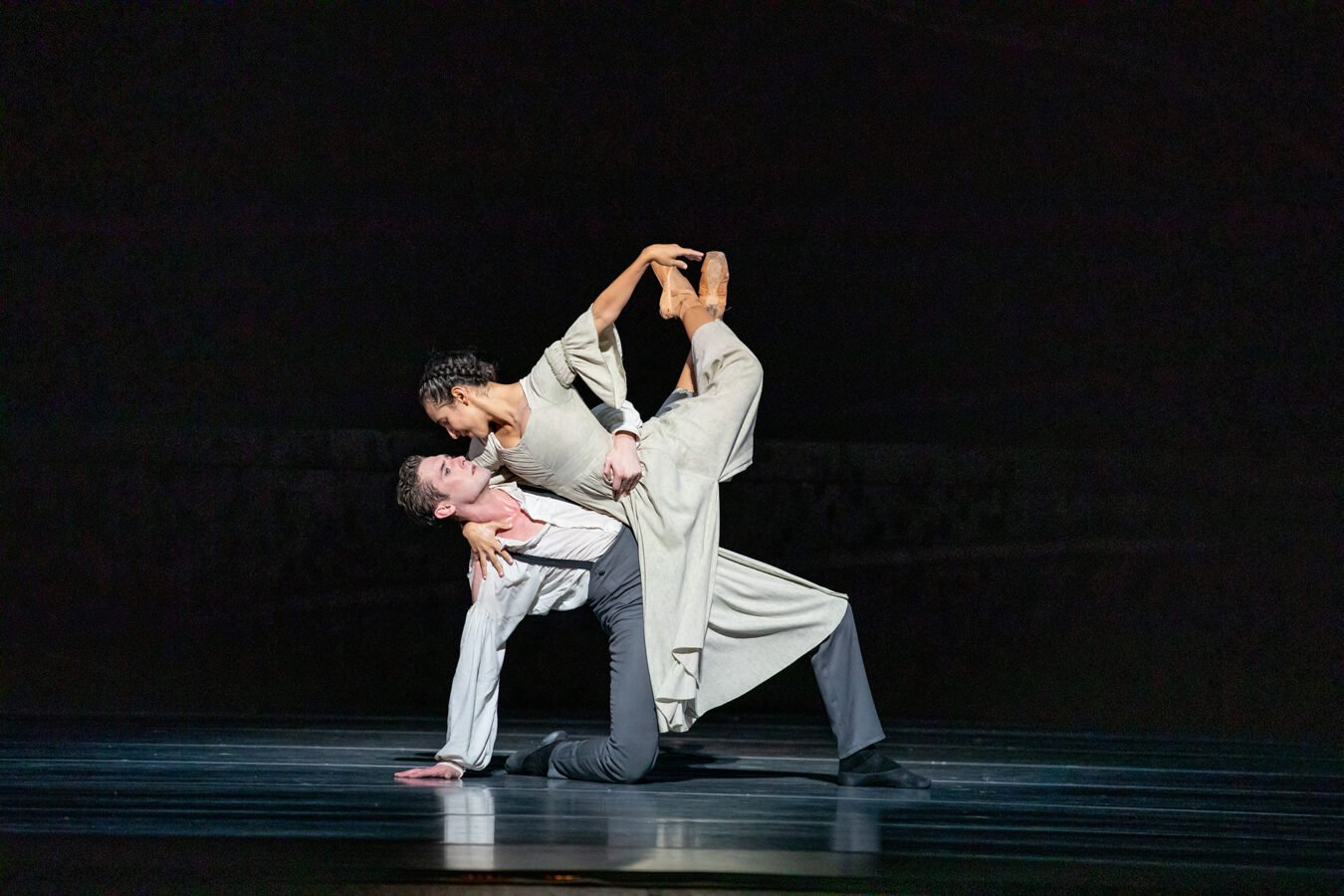 WFMT: What passages or story elements were the most difficult to adapt?

Marston: One of the challenges of taking a story from page to stage is that there are descriptions that you will never be able to replicate exactly, but that’s a wonderful thing for me as a choreographer.

There is a moment where Jane has found out that Rochester already has a wife. She lies on the floor and imagines she is in the riverbed … and imagines herself drowning in the water… The passages in the book are so incredibly inspiring, so while I would never expect the audience to recognize the dry river bed that comes directly out of Brontë’s text, it’s in the choreography and the dancers know it’s there.

It’s all about intention and the storytelling and, of course, along the way because I’m working with wonderful dancers, beautiful movement will be generated but I have to be quite rigorous about seeing whether that movement is doing its job. Is it telling the emotion we want to express, or the story corner that we’re trying to get around? If it’s not, we need to lose it. I have to be quite strict about that. I want to strip back any extra fluff, so we’re telling something very true to its message.

WFMT: What was it like working with Cathy Marston on this project?

Assucena: I think Cathy has told the story of Jane so incredibly well. Only a woman can translate another woman’s thoughts, feelings, insecurities, and ambition into storytelling movement, and Cathy has managed to do that so beautifully.

Kim: The rehearsal process has been very inspiring because Cathy emphasized so much on the meaning behind each movement. When Jane is looking at Rochester, a tiny difference in how she gazes into his eyes, or touch his shoulder totally transforms the dancing and brings clarity of the story. Even though we are rehearsing the dance, so much of it is about the characters and individual interpretations coming from dancers.

WFMT: What do you hope to impart to the audience with this ballet?

Marston: Jane Eyre is challenging for the dancers but in a good way. Who doesn’t want to live on stage so vividly? They’ve really connected with that process. It’s an emotional ride for them. They will be changed at the end of the evening. I hope that will pass over the stage to the audience.

Joffrey Ballet’s production of Jane Eyre runs through October 27 at the Auditorium Theatre. For ticketing and information, visit joffrey.org.

9 Works by Women Writers We Want to See Adapted into Operas
Joffrey Announces 2021-22 Season In First Year At Lyric
Joffrey Ballet Announces 2020-21 Season
Ryan McKinny on His Friendship, Artistic Partnership With a Death Row Inmate: 'We’re Human Just Like Him'
In the Age of the Visual Album, What Can Opera Learn from Beyoncé?
Odysseys of Movement, Music in Joffrey Program