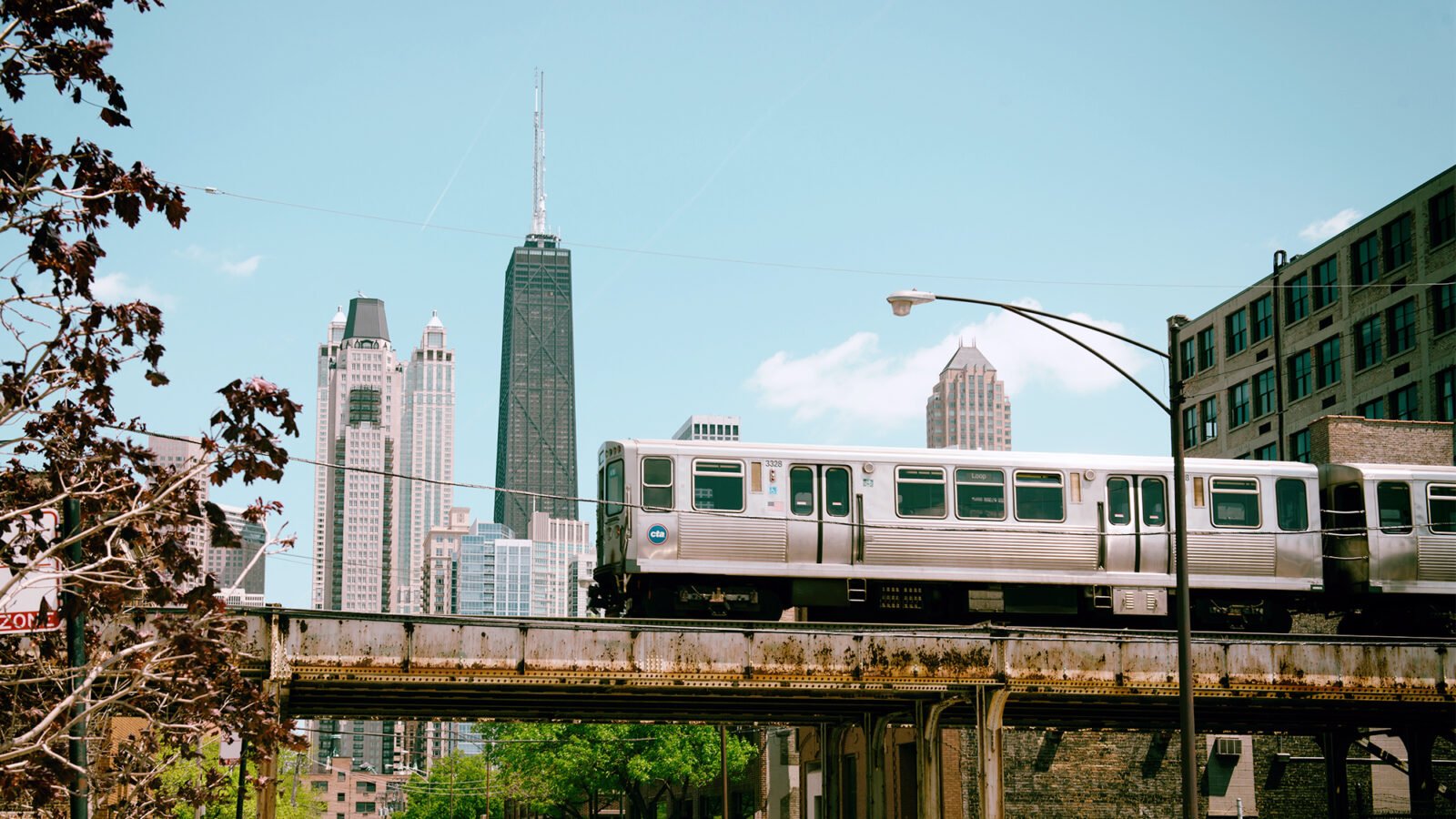 For many of us, the 'L' is more than just a means of getting around the city. It’s a social network, concert venue, observation deck, and roving reading room, uniting Chicago’s cosmopolitan mix over 224 miles of track.

This Wednesday, WFMT's sister station WTTW premieres Chicago By 'L' hosted by resident curiosity-sater Geoffrey Baer. The program will explore the history of the CTA's elevated train lines, including rides on the CTA's "Heritage Fleet" series (preserved vintage train cars dating back as far as 1923).

But what about music inspired by the 'L?' Recently, I took to social media to ask Chicagoans about their favorite CTA-centric standbys. Needless to say, folks delivered.

Posed this on Facebook and want to put out feelers here: What's your favorite music that is inspired by or mentions the @cta? I'm compiling a list.

The following eleven tracks wind through genres and decades, so hop on board, and thank you for riding the… well, you know.

Jump to playlist • Note: Some of the songs included below include adult language and content.

"Far, Far Away" by Wilco

This one's for all the folks in long-distance relationships. Wilco's sophomore album Being There saw the beginning of the Chicago-forged band's evolution from an alt-country outfit to something more idiosyncratic. But the dreamy ballad "Far, Far Away" makes it clear that their allegiance to twang was around to stay. "I long to hold you in my arms and sway / Kiss and ride on the CTA," Jeff Tweedy croons to an absent S.O.

"The El" by Rhett Miller

This alt-country romp is one of the few on our list not by a Chicago-based or -born artist. Maybe that's why Miller, who grew up in Highland Park — as in the affluent neighborhood in Dallas, not the also-affluent North Shore suburb — is so hypnotized by the L. In this song, he rattles along on, kisses a lover under, and breaks up "all over" the L. Sure, we have questions (did this all happen in one day? one trip? and what kind of monster ends a relationship on public transit?), but one thing's for certain: 18 years on, this guitar-forward jam is still as exhilarating as a ride on an express train.

Lots and lots of songs by Chance the Rapper

No surprises here — the musical artist who reps Chicago in just about every project he touches also touts its public transit system. In "Windows," Chance salutes a broken turnstyle at the Harrison Red Line stop, which he passed through countless times while a student at Jones College Prep ("For the free train rides, shout out to Polk Street"). A nod to the same train line appears in "Atlanta House Freestyle," which the Chatham native dropped on SoundCloud last year with Lil Yachty. "I run through the city like the Red Line," Chance raps on his second verse, followed by characteristic jabs at Chicago media and speculation about the future of a certain city official. ("Sun-Times facin' that deadline / 'Bout to start makin' up stories like bedtime / Old mayor 'bout to face fed time.")

But Chance’s most memorable 'L' reference isn't even a lyrical one: the music video to "Angels," off Coloring Book, in which the rapper rides on top of a Brown Line train. To film it, train #3454 was put out of service for a day to circle the Loop.

This 2016 work for small orchestra and electronics is subtitled as "a scherzo, sort of." The Italian word for "joke" is an apt enough description for a grotesque hellride that manages to stitch together distorted CTA announcements and the Dies irae. Frantic instrumental interjections drive the point home: Yes, sometimes your morning commute really is that bad.

For Chicago composer Lawrence Axelrod, the subject matter is personal: He lived a ten-minute walk away from the Kimball stop at the time, so the northwest-side line was his ticket into the city. Inspired by the Witches Sabbath movement in Hector Berlioz's Symphonie fantastique, Axelrod put pen to paper, immortalizing the pent-up frustrations of thousands of Chicagoans before him.

"The ['L'] is an amazing way to move people around the city and is a vital urban resource. It is also a source of frustration, crowding and difficulty," he writes in his program note to the piece. "I decided to run with the nightmare aspect, turning a ride on the ['L'] into a kind of horror movie scenario."

Another piece composed the same year as Axelrod's Brown Line has a decidedly sunnier perspective of the CTA. The Addison Red Line is a tribute to the station that's synonymous with that other towering Chicago icon, Wrigley Field.

Apparently composer Jeremy Bell, who's based here, finds the rowdy pre-game bustle charming enough to dedicate this jaunty four-minute ode for concert band to the station.

"You'll hear the energy of people passing by, going to restaurants or meeting with friends, all centered around the passion and fervor that baseball season brings," Bell writes in an introduction to the score.

"The Train Goes Slowly on the South Side" by Stony Island

"Here's another happy song about a train…" a woman coos, as though introducing a nursery rhyme. Of course, "The Train Goes Slowly on the South Side" is about much more than its tongue-in-cheek opening sample implies: Indie hip-hop trio Stony Island seamlessly weaves heartfelt affection for the CTA with pointed social critique. In an interview with the Chicago Reader, LaVie "Super LP" Raven, a core Stony Island member, says that the track was inspired by the lamentable condition of the Green Line in the early 1990s, which fed into "the disenfranchisement and marginalization of the black communities" serviced by the route. (The Green Line was closed for renovation shortly after the 1993 announcement that the CTA would be realigning its rail routes and assigning colors to each line.)

But in the track's first verse, it's the Red Line that becomes a proxy for the CTA at large: "The rails can deliver me / Past 55th, the conductor's name is Garfield Ryan / Father's name is Dan, if you front, you'll be fryin'." (Another read: If you hear "flyin'" instead of "fryin'," the line becomes a possible reference to the Dan Ryan Flyer, a nickname for the south suburban express bus that once trotted alongside the CTA route on the expressway.)

As noted in the same Reader article, even the record's title, Supertransfer, nods to the CTA and how it became instrumental in nurturing Chicago's burgeoning hip-hop scene. "Back then Sunday was the hip-hop day, because people on the south side would get their supertransfer, which meant you could ride the CTA all day," said John Schauer a.k.a. J.P. Chill, formerly an on-air DJ for 88.5 WHPK.

"The Garfield El" by The Fiery Furnaces

Extra credit to this brother-sister team for taking a historical tack here. Five years after they founded The Fiery Furnaces in Brooklyn, siblings and Oak Park natives Matthew and Eleanor Friedberger embarked on an experimental album about — and featuring — their 83-year-old grandmother, Olga Sarantos. The result was Rehearsing My Choir, a zany, brainy, un-pin-downable album that free-associates from Sarantos' stories about growing up in postwar Chicago. Even the album title is a reference point: Sarantos was the choir director at a Greek Orthodox church in Austin for 40 years.

Opening the album is this erudite homage to the defunct Garfield Park Branch Line, which, as the song obliquely explains, ran through the West Side "by act of Congress and blue all the way to Forest Park." (The Congress and Blue Lines were the route's eventual successors.) "I mean to open the folding green and white door / And take a late train to my lost love," Sarantos intones in the first verse, referring to the color scheme of the 6000-series railcars inaugurated in the 1950s.

Turns out the Friedbergers will be homeward bound again soon: The Fiery Furnaces are headlining this year's Pitchfork Festival, marking the siblings' first live show together since they decided to pursue separate solo careers ten years ago.

Ironically, one of the sharpest one-liners about Chicago's transit system is baked into a song extolling the virtues of another metropolis. Here, rapper Mick Jenkins — who grew up in Burnside and returned to the city to launch his musical career — describes hanging out in Montréal, whose area code lends the track its title. He unfavorably compares the U.S. to its northerly neighbor, with one exception: "Like the CTA I keep my pace / I ain't in it for the JP Morgan chase." Not only is Jenkins' double-entendre about Pace satisfying to the extreme, it's also a rare shout-out to what has to be Chicagoland's most musically overlooked public transit network. (In case you're wondering, though, Jenkins told Vice that his favorite bus route is the CTA's Jeffery Jump. Sorry, Pace.)

A more evocative pick: this contemporary jazz number off German composer Philipp Teriete's debut album, Afterglow. After a dreamy intro, the piece settles into a propulsive, asymmetric groove, which the composer says is inspired by the clacking of the wheels on the track. And that catchy melody? It's based on the ding-dong of the closing doors, outlining then inverting the familiar descending fourth.

"That's how I got the idea to write the piece," Teriete wrote in an email to WFMT. "I notated the melody on the train and worked out some rhythmic ideas later."

In "Chicago Elevated," Teriete shadows that melody at the piano with Monk-like clusters and winding arabesques. Before returning to Germany to study at the University of Freiburg, Teriete studied at NYU; the four musicians joining him on the album (guitarist Elias Meister, bassist Martin Wind, drummer Joel Hertenstein, and flutist/saxophonist Dave Pietro) are poached from New York's bustling jazz scene.

"Love on a Real Train" by Tangerine Dream

This number accomplishes a real feat — it's likely the most iconic piece associated with the 'L' that never mentions or even samples sounds from the train system. Anyone who's seen Risky Business knows why that is: This song, composed for the film by German electronic band Tangerine Dream, is the backdrop for a love scene between protagonists Joel (Tom Cruise) and Lena (Rebecca De Mornay) that is just as risqué now as it was in 1983.

Luckily, you can listen to this very safe-for-work electronic dance number without blushing, which has since been reused in a number of other TV shows and films. Further proof of its indelibility: In 2015, Pitchfork ranked “Love on a Real Train” among its top 200 songs of the 1980s.

How about an entire album inspired by the CTA? In the late 1960s, a cadre of college students linked up to form The Big Thing, a brass-powered, rock-meets-big band musical experiment. Their manager and producer Jim Guercio suggested that the group change its name to Chicago Transit Authority, and the group released a self-titled album under that name in 1969.

Unsurprisingly, the real Chicago Transit Authority came a-knocking in short order with a cease-and-desist letter. "We heard from the municipal transportation district that [the name] was the proprietary property of the city of Chicago transportation department," Guercio recalled years later in the liner notes for the 1991 compilation album Group Portrait. “I just didn't want to have any problems."

Guercio rechristened the band a second time, shortening the group's name to Chicago. As they say, the rest is history.

Truth be told, there's nothing on this self-titled album that has to do with the CTA beyond its title. Notably, however, Chicago Transit Authority features two tracks recorded in solidarity with the Democratic National Convention protesters from the previous year, sampling their widely broadcasted chant "The whole world's watching."

To learn more about Chicago By L, the CTA, and Chicago, visit wttw.com/chicagobyl.