On a state-of-the-art soundstage in the West Loop, lush harpsichord ornamentation and precise vocal trills abound. The baroque melodics make for a somewhat surprising — but not unharmonious — complement for the large, white-clad room that’s been carefully lit, mic–ed, and rigged for filming.

This weekend, Chicago’s Haymarket Opera Company launches its tenth-anniversary season with a digital premiere of a filmed performance of Handel’s seminal baroque masterpiece, Acis and Galatea. The work premiered in 1718, but Haymarket is presenting it in a digital, HD stream, in other words, in a way that is unmistakably 2020. But even when the company is eventually able to return to the stage and receive an audience, interim general director Chase Hopkins expresses that he’d still like to see long-form film projects included in subsequent seasons.

So how (and how well) does this balancing act of 18th- and 21st-centuries work?

Earlier this month, WFMT visited the set of Haymarket’s filmed production west of the Loop at Resolution Studios as Michael St. Peter (Acis), Kimberly Jones (Galatea), David Govertsen (Polyphemus), and the chorus rehearsed Acis and Galatea with Haymarket music director and founder Craig Trompeter and the orchestra. The set was bustling with the activity of the musicians as well as audio engineers, camera operators, grips, and production assistants. 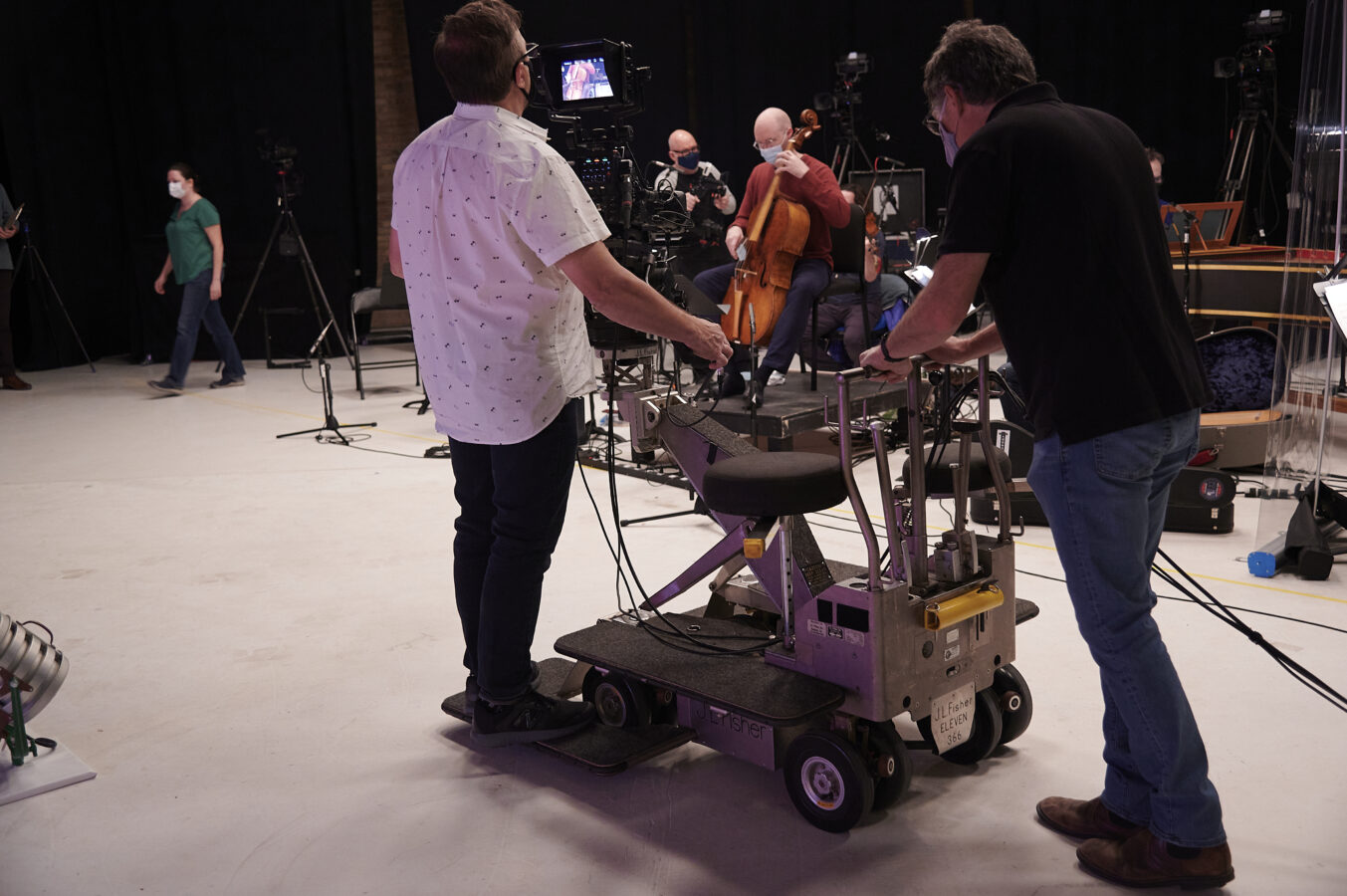 Surveying the studio, it was again, undeniably 2020 despite the profusion of 17th– and 18th– century instruments. On top of the HD cameras, everyone wore masks and the orchestra members and singers alike were socially distanced. That presents some challenges, Hopkins notes, as the distance can make it hard for the orchestra to stay connected and perform in unison.

But despite these drawbacks, there are also some benefits to this necessary layout. Hopkins, as well as Kimberly Jones and Michael St. Peter, express that this setup might actually help the singers. They are positioned 15-or-so feet from the orchestra, but, uniquely, are eye-level with the conductor, who is directly within their line of sight. “There was a [vocal] run that I did differently,” St. Peter recounts, “and as soon as I did it, I could tell that Craig [Trompeter] was like, ‘Um, excuse me?’ I could tell from the way that he looked up from his score.” Jones agrees, laughing, “That made it exciting! You could tell how the conductor reacts.”

Visually speaking, the performance is not just a filmed concert. Though there is little staging and the performers are dressed in concert wear, the performance is something that was made to be filmed. In rehearsal, dollys and gimbal rigs pushed in and out, panning across the orchestra members or framing the vocalists in sensitive closeup or striking wide-angle. 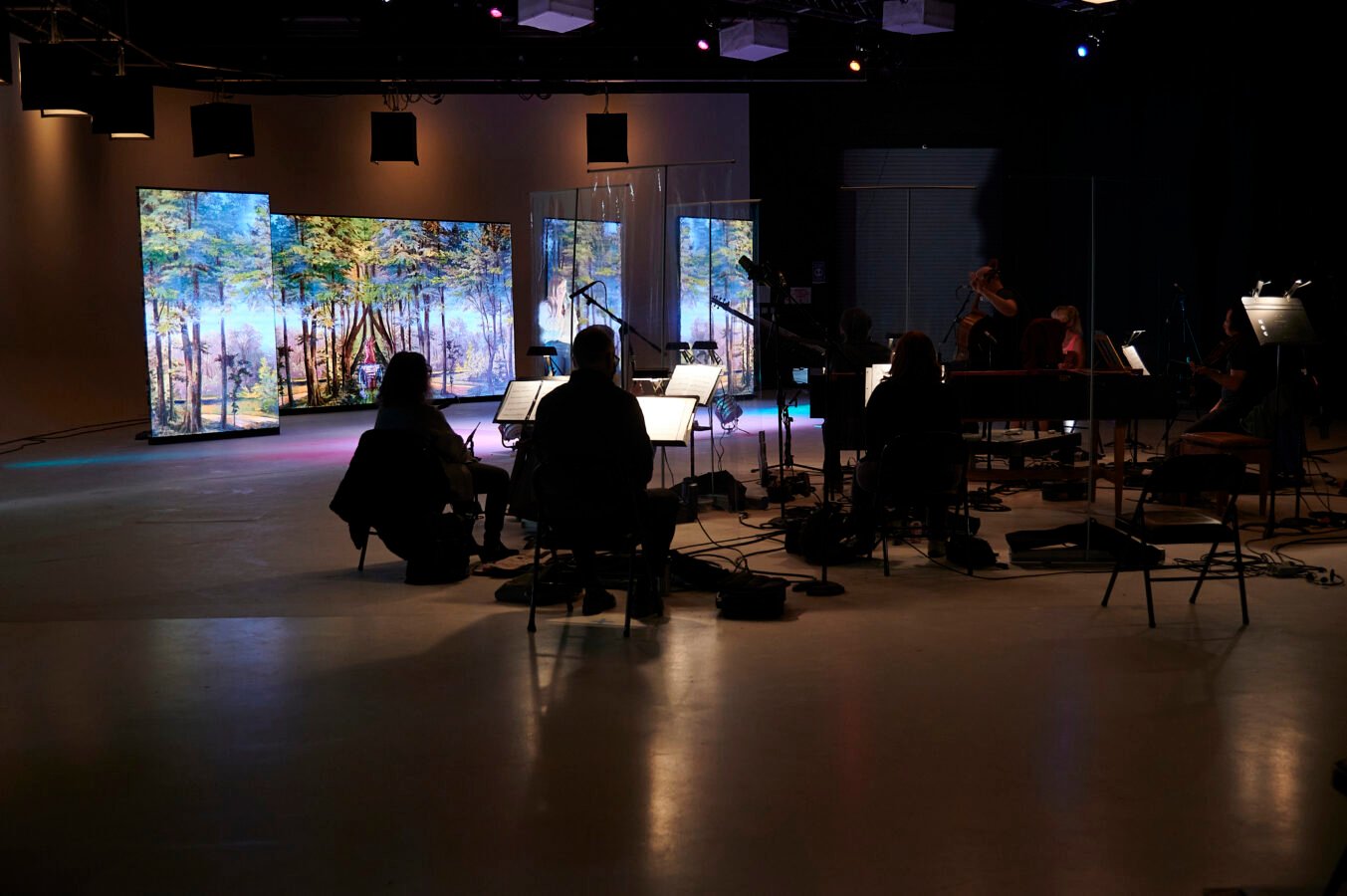 Another cinematic element comes in the set — an impressive array of LED panels adds color and context to the film, featuring baroque-inspired art by frequent Haymarket collaborator Zuleyka V. Benitez. Even the arrangement of the panels on the stage, Hopkins explains, mimics the stage arrangement of a typical baroque opera, making this cutting-edge setpiece, in his words, “very Haymarket.”

Hopkins says he and his team began to prepare for a filmed season in April when it was becoming clear to him that a conventional, in-person season would not be possible. It’s an impressive feat for a midsized opera company to pull off; Hopkins describes Haymarket as “the little company that could.” For performers Kimberly Jones and Michael St. Peter, the opportunity to perform — even in this altered way — was exciting, too.

“I was just expecting to get the cancelation email,” St. Peter shares, explaining that getting to perform “is just really special. I felt really grateful to get to be a part of it… it was really inspiring and it really lifted my spirits after months of quarantine.”

Hopkins hopes that audiences will embrace the opportunity to see the performers “do their thing,” which he acknowledges is difficult to come by during the pandemic.

“I think we all miss a live audience…” Jones shares. “The wonderful thing is, you can definitely tell that sometimes the orchestra was looking right at you as you were playing because they were engaged with what we were doing. They wanted to connect with us. I think everybody was so happy to be able to perform, and I think you’re going to feel that when you’re watching the recording.” 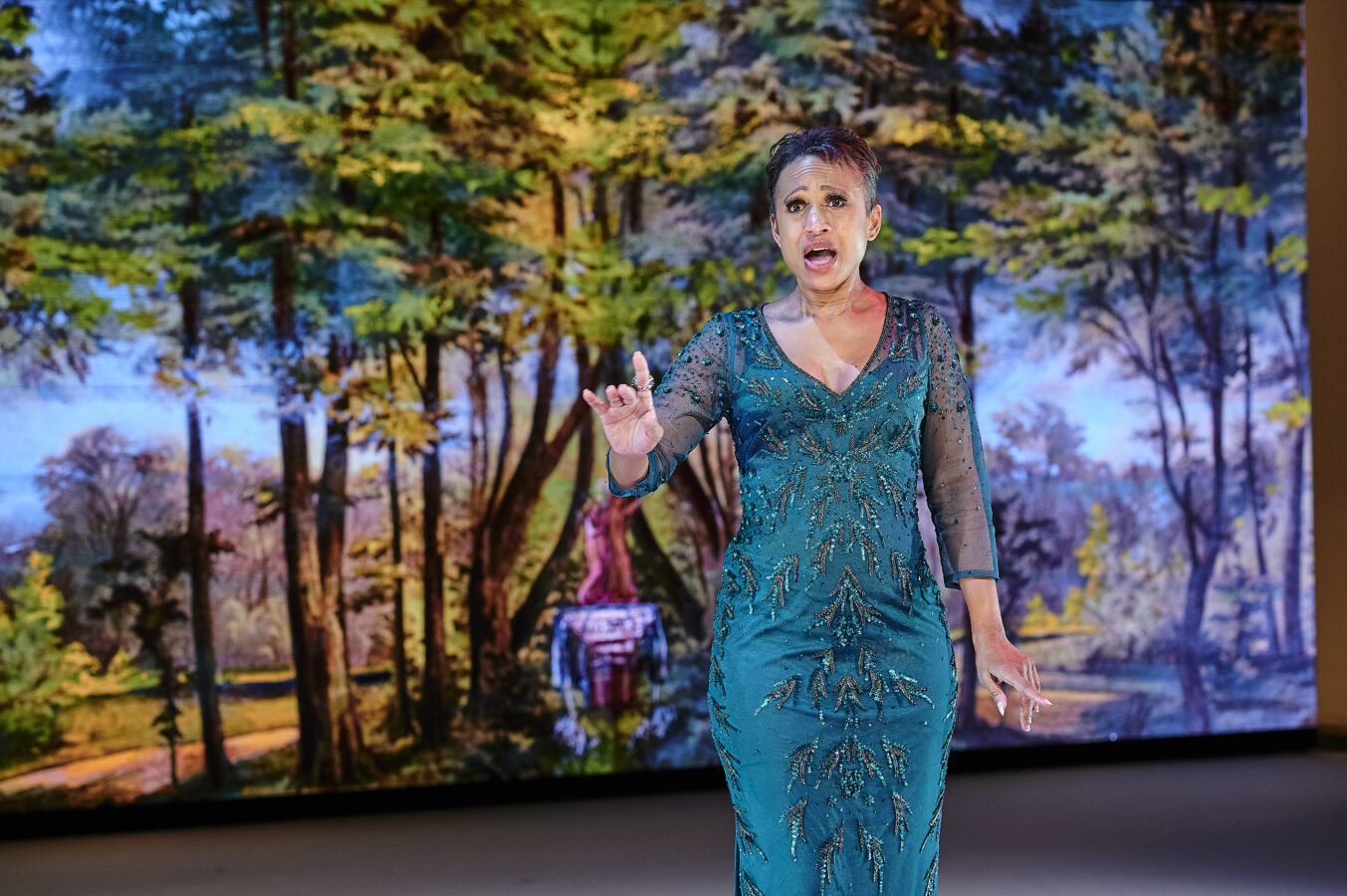 Haymarket Opera Company’s season opener — the HD streaming presentation of Handel’s Acis and Galatea premieres on Friday, October 30 at 7:30 pm and will be available for on-demand viewing through November 8. For ticketing and information, visit haymarketopera.org.

In the Age of the Visual Album, What Can Opera Learn from Beyoncé?
'The reach is exponentially larger': How Kamala Sankaram Brings New Audiences, Stories to Opera
Discover Illinois' Newest Opera Company — Opera Edwardsville
Decade in Review: The 2010s and Classical Music
Enrique Mazzola on Returning to the Stage, Taking the Reins at Lyric
Lyric Returns With Free Star-Studded Virtual Gala