“Opera is an irrational art form,” Pulitzer Prize-winning composer Paul Moravec reflected as he prepares for the world premiere of his latest work, The Shining, at Minnesota Opera. “The first question that a composer must ask when writing an opera is: why are the people singing? There has to be a reason why these people standing on stage are singing at the top of their lungs at each other,” he said. 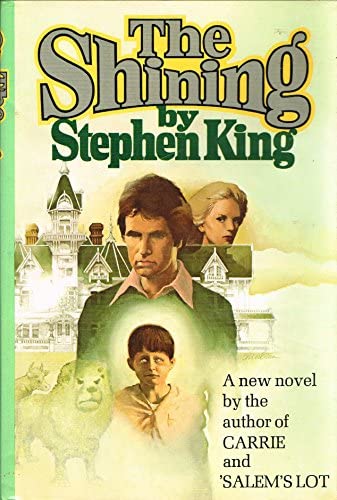 First edition cover of The Shining

The irrational world of Stephen King’s The Shining, it turns out, provides plenty of reasons. The best-selling novel, published in 1977, tells the story of Jack Torrance, who loses his job as a teacher for abusing his own son, Danny, and agrees to serve as the caretaker of the haunted Overlook Hotel.

“A supernatural story makes total sense for an opera because it blends the conscious and the unconscious, reality and dream worlds,” Moravec said. “And this is a supernatural story about love, death, and power with the rich characters that Stephen King has created.”

For The Shining, Moravec teamed with librettist Mark Campbell, who has created five pieces for Minnesota Opera as part of its New Works Initiative, including Silent Night, which won the 2012 Pulitzer Prize in music. Moravec, Campbell, and baritone Brian Mulligan, who creates the role of Jack Torrance in the opera, all spoke about mounting the world premiere of The Shining in recent interviews.

From Book to Libretto

When the artistic director of Minnesota Opera, Dale Johnson, approached Campbell to create an opera inspired by The Shining, the librettist had not yet read the novel. Since, he’s discovered what has made Stephen King such a successful author. 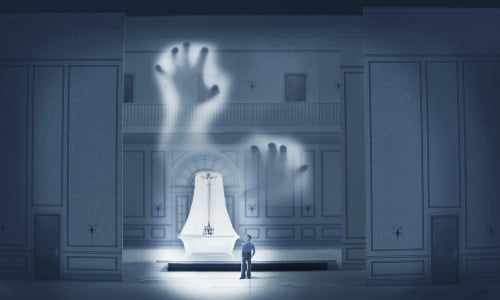 “A lot of literary snobs look down on Stephen King, but he’s a terrific storyteller – one of our best – and an amazing dramatist,” Campbell said, “So why not adapt The Shining? Opera does not have to be pretentious and boring and long and confusing to be good.”

Campbell drafted a complete version of the libretto before showing his work to Moravec. One of the biggest challenges was condensing King’s novel, a lengthy 447 pages in its first edition. “I tried to ‘telescope’ the story. By tightening it up we can keep the suspense going, which is crucial in a story like this. There’s one scene in the novel that’s extremely terrifying involving a wasps’ nest. But that kind of scene wouldn’t work in a large theater.”

Of course, when Stanley Kubrick adapted The Shining into a 1980 film starring Jack Nicholson, he “telescoped” King’s original story in certain ways.  “I’ve brought out certain things in the novel that people might not be aware of, having only seen the movie,” Campbell said. “A lot of people don’t know that Jack Torrance was abused by his own father, Mark Torrance. I’ve made the character of Mark very present in the opera. He haunts Jack throughout the story and is a catalyst for some of the action.

“I also brought out the character of Dick Hallorann, who is the cook at the Overlook Hotel and who shares the gift of the shining with Danny. In the novel, Hallorann does arrive at the hotel and he rescues Wendy and Danny. He’s not killed like he is in the movie. There’s a really beautiful epilogue eight months after the main part of the story has ended, and he tells Danny that he must be strong and that he is loved and that he must go on in spite of the horrible things that have happened.”

Campbell continued, “I write an entire libretto, but it’s not ‘finished,’ of course. Paul went over every word and every syllable and if he had an issue, I rewrote things. That’s my responsibility as a librettist. Though at the same time, I have to think of the audience. So while a composer might want a giant aria at some point during a story, I have to determine if fits with the whole structure. It’s a very collaborative process between Paul and me.”

To craft the score to The Shining, Moravec said he thought polystylistically. “I created several sound worlds in the opera, making sure there are differences between the world of the living and the world of the ghosts, the Overlook.” The magic of music also allows Moravec to create a character out of the Overlook itself. “It doesn’t sing, but the orchestra is the voice of the Overlook,” he said. “It was really fun to imagine how these sound worlds would interact and overlap and vie with each other.”

In the Minnesota Opera premiere, a fifty-five-piece orchestra offers Moravec “a lot of resources for coming up with really cool spooky sounds,” he said. “We’ve got four horns, two trumpets, a tuba, and four trombones,” Moravec said. “You can’t do an opera like this without a big trombone going BWWWAAAAAAA!” Three percussionists play a rich array of pitches and unpitched instruments. The usual group of vibraphones, timpani, and bass drums are supplemented with additional instruments like tamtams, water gongs, and a drum kit.

Moravec invites the instrumentalists to be co-creators of the score. “They’re the experts on their instruments, and I’m more than happy to collaborate with musicians who can get into the spirit of things and add something to the music. They sound better and they make me sound better, so everybody wins!”

Despite the strange sound worlds that Moravec conjures up in the pit and onstage, he said, “All of the components that I consider essential to making an opera are there. The piece has full-blown arias that a listener will identify right away as operatic arias. There are chorus numbers and duets and ensembles. I worked hard to compose memorable melodies. I think that’s an important aspect of writing an opera.”

The Real Demons in The Shining

Though Jack Torrance is tormented by supernatural forces, Brian Mulligan, who creates the role in Minnesota Opera’s world premiere of The Shining, said: “He brings a lot of his demons to the Overlook. As scary as The Shining is, the scariest moment in the novel for me is this incredible description of Jack’s father nearly beating his mother to death right at the dinner table in front of him. She collapses in her plate of food and is motionless for a while. It’s frightening. And you start to wonder what’s really scary in this world. Is it ghosts or something real like domestic violence?”

Mulligan has been a fan of King for years, and has known the character of Jack since his teens. “I was a weird little kid and my parents limited how much television I could watch but I could read as much as I wanted. My first Stephen King book was Salem’s Lot, and I read The Shining probably soon after that.” When he joined a book of the month club, his collection of King novels increased.

The baritone was offered the role of Jack Torrance after auditioning for another Minnesota Opera production, Hamlet, for which he was cast in the title role. “If I had I known Minnesota Opera or any company were commissioning an opera based on The Shining, I would have done everything I could to get the role because Jack Torrance is such a complex character. He’s a victim and the villain. He’s abusive but he’s a hero at the end.”

Mulligan said that in spite of his affinity for Jack, he is excited about the role because: “There are not as many opportunities for men to have a psychological breakdown throughout the course of an evening in an opera as there are for women. I destroy things. I destroy the door to the apartment, of course. That’s really fun and satisfying,” he said gleefully. “I also destroy the radio which is our only link to civilization. It can be fun to be sadistic and remorseless.”

Moravec depicts Jack’s madness musically. “What Jack Torrance gives me,” the composer said, “is this unbelievable rage that he feels throughout. He’s an incredibly angry character. Even when he’s not expressing that with big long-held high notes, it’s still boiling up under the surface.

“What I tried to do was get the audience into the imagination of Jack Torrance as he descends into madness, and he is overwhelmed by all these evil forces,” Moravec added. “His sound world becomes subsumed into the sound world of the Overlook Hotel.”

Throughout the opera, “I’m certain a lot of the audience will be uncomfortable,” Mulligan said. “There’re a lot of choreographed fights. As Jack, I hit my child. I strangle my wife. It’s very violent. But there are a lot of verbal fights too, and those are scary. Though in Jack’s mind, his wife and child are these failed extensions of himself that he wants to destroy in order to destroy parts of himself that he hates.”

“To err is human, to revise, divine”

In creating The Shining, Campbell and Moravec have changed the work many times. “We revised a lot,” Moravec said. “There’s a saying that ‘to err is human, to revise, divine,’ and I certainly believe that. Revision is the name of the game. Opera is a practical medium. If something isn’t working, you must fix it immediately.”

“We don’t want the opera to sag in any way,” Campbell said, “and we’re trying very hard to make sure that the pressure stays on. Pacing is extremely important in The Shining. The story has to keep churning forward and have a kind of relentlessness.”

Minnesota’s lengthy opera development process has afforded the creative team several workshops to make necessary changes. “There are things that I took out of The Shining in the workshop process that I thought were pretty good musically,” Moravec said, “but I took them out because you need to think of the overall picture. If the music doesn’t support the overall agenda, it has to change.”

The finale of the opera is one section that Moravec and Campbell revised multiple times. “We wrote several different versions of the same aria, and we just couldn’t get it right. It just wasn’t working, and finally I think we got it right. But that’s a process that was made possible because we’re practical guys who can keep their egos out of the way of the process.”

Campbell said, “You think you’ve built everything in so perfectly and you’ve looked out for every possible problem and tried to clarify everything that could possibly be unclear. And then, you’re in the house with a live audience, and you sense they didn’t get something and that can be disappointing.”

“I don’t think audiences will be disappointed with this,” Moravec said. “It’s going to be very special and something you just have to be physically present to witness.”

Minnesota Opera’s entire run of The Shining sold out in advance of its world-premiere performance on May 7, 2016, with only standing room tickets remaining.

9 Works by Women Writers We Want to See Adapted into Operas
Grammys 2022: See All the Classical+ Nominees (And Winners)
U2, George Clooney, Amy Grant among Kennedy Center honorees
James Levine, who ruled over Met Opera, dead at age 77
Musical Tails: 6 Composers Who Wrote Music for Pets
From 2015: Ramsey Lewis On His Long Overdue CSO Debut