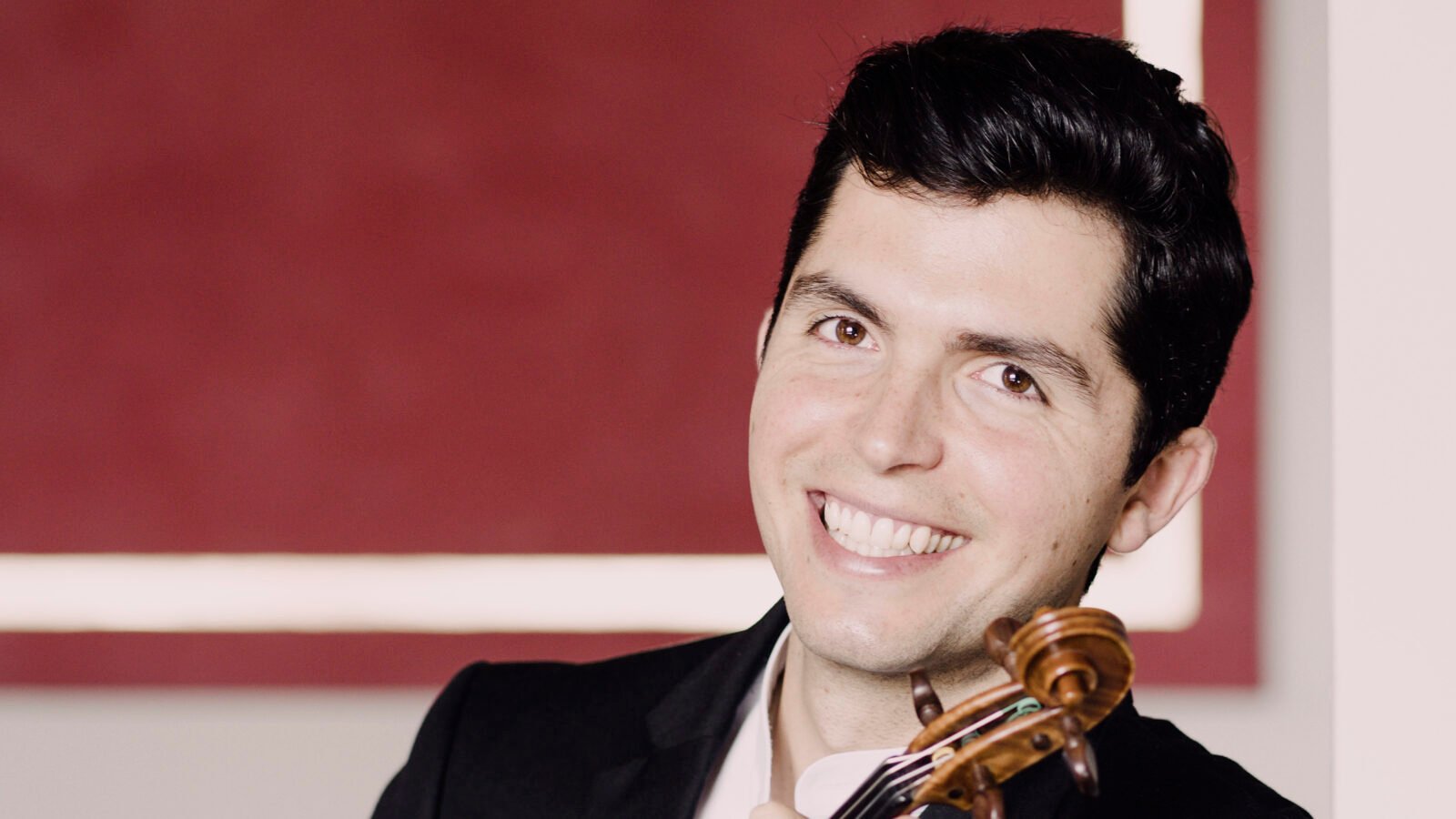 Violinist Ryan Meehan, a member of the award-winning Calidore Quartet

Now in its 10th season, WFMT’s Introductions, the Saturday morning program that highlights the finest pre-college musicians in the Chicago area, has given young artists a platform to have their talents and voices heard. Many students who appear on the program decide to study music at an early age, but Introductions alum Ryan Meehan discovered the violin by accident.

“I was born in Florida and spent a lot of my childhood there,” Meehan said in a recent interview. “My parents have no musical background, but my mom thought it might be good for me to play violin. My name was literally chosen out of a hat in a lottery system to participate in the school’s violin program.”

Meehan progressed with the violin, and by age 13, he began to think that music could be a career choice. He decided to study with Almita and Roland Vamos, two string teachers at the Academy of the Music Institute of Chicago, an intensive, pre-college training center for young musicians who intend to pursue performance careers. The Vamos’s students hold distinguished positions around the world, and, like Meehan, many students move to the Chicago area to study with the legendary educators.

“I would definitely not be able to pursue violin professionally if it weren’t for the Vamoses,” Meehan stated, “and I certainly wouldn’t be playing chamber music.” Meehan went on to attend New Trier High School in Winnetka, and his time at the Academy fostered his love of chamber music.

“I love being able to share music with your close friends. I grew up admiring the Pacifica Quartet, and I was able to get to know them personally and to understand what life would be like as a chamber musician. As I started playing in more competitions and festivals, I would think, ‘Who would be my dream team for a quartet?’”

Jeffrey Myers, Meehan’s co-violinist in the Calidore String Quartet, was one of those musicians, but the two were initially competitors. “Jeff and I actually used to compete against each other at the Fischoff and St. Paul chamber competitions, so we were not friends at all!” Meehan laughed. “But we go to know each other, and he actually told me about the Colburn Conservatory, where I eventually attended.” 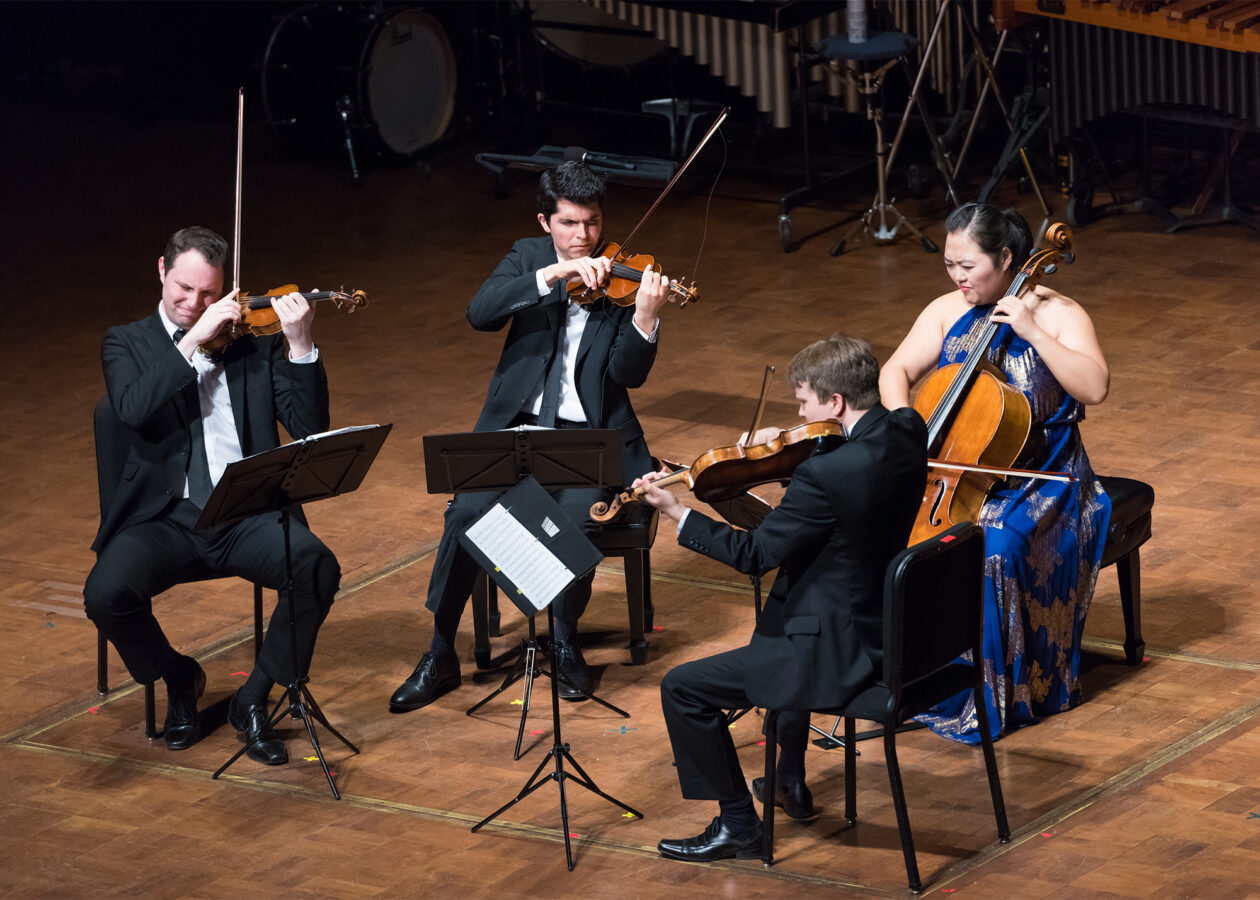 Meehan joined Meyers in the Calidore Quartet after college, and while the group had decided to not compete anymore (they had competed in seven competitions in two years), they learned about the M-Prize Chamber Arts Competition at the University of Michigan in 2016. “When a competition has a grand prize of $100,000, that is an opportunity you can not pass by!” Meehan explained. “The competition is unique because you aren’t just competing with strings and winds. There’s an open division with mixed ensembles, so it’s a bit like comparing apples and oranges. But we decided to give it a try.”

Calidore went on to win the $100,000 grand prize at the inaugural M-Prize Competition. In addition to launching more performance opportunities, the quartet was accepted to participate for the Bowers Program, a three-season residency at the Chamber Music Society of Lincoln Center (CMS). The Bowers Program recently received a $5 million gift from Ann S. Bowers, the largest in CMS history, to further develop the next generation of young artists.

Meehan noted that the program fills in a gap after graduating from college. “When you’re in school, it’s easy to go along and get advice from your teacher. But once you are a professional, there are A) very few people willing to give their thoughts about your performance and B) whose feedback you can trust.”

He continued, “So when we work with David Finckel and Wu Han [CMS Artistic Directors] and ensembles like the Emerson Quartet, we get advice from, arguably, some of the best musicians on the planet. We can go to them anytime, day or night, to discuss strategies for our career.”

For the many young musicians having difficulty navigating the competitive industry, Meehan says that it’s okay to specialize. “When I was in school, I played in as many string quartets as I could. Over time, people said, ‘Oh that’s the kid who plays string quartets,’ and I was offered more opportunities.”

Ryan Meehan will perform with the Calidore String Quartet as a part of their CMS residency at the Harris Theater for Music and Dance on Tuesday, October 30 at 7:30 pm. Calidore’s latest album, Resilience, is available on Signum Classics and iTunes.