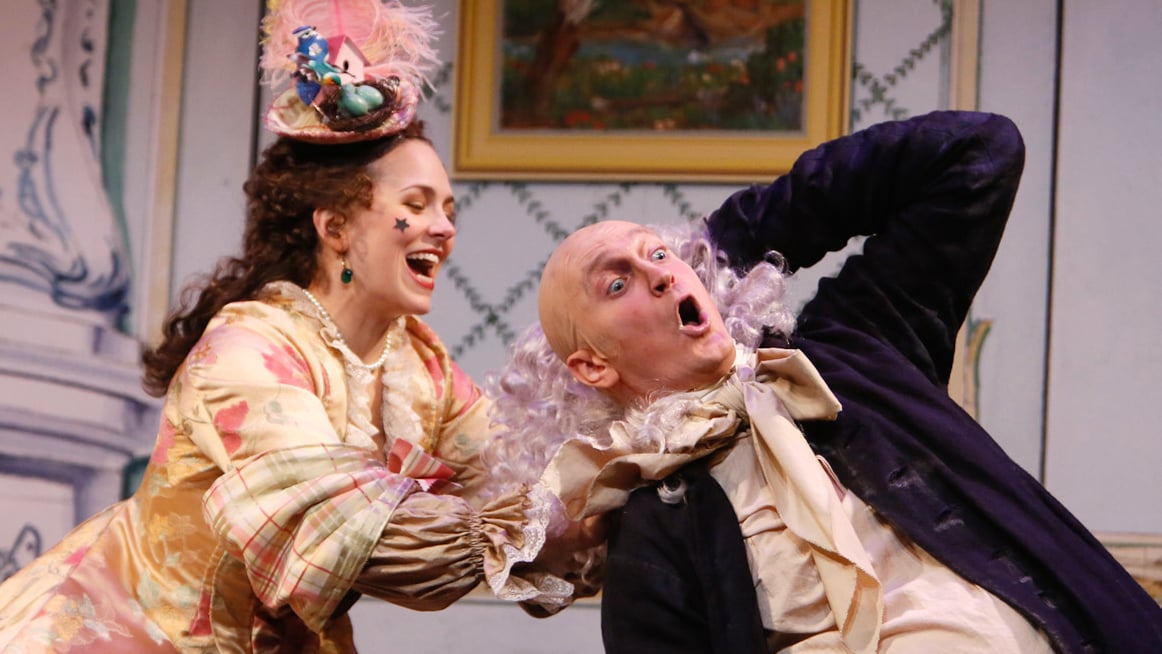 Pimpinone, a 1725 comic opera by Georg Philipp Telemann with a libretto by Johann Philipp Praetorius, tells the story of Pimpinone, a lustful rich man, and Vespetta, a scheming chambermaid. In search of a husband and a fortune, Vespetta first convinces Pimpinone to hire her, and then she persuades him to propose marriage. Now his wife, she becomes the real boss of the household, controlling every aspect of the titular character’s life.

Running March 30 through April 2, Haymarket Opera Company‘s Pimpinone features baritone Ryan de Ryke and soprano Erica Schuller, who reprise their roles from Haymarket’s 2013 production. We spoke with these artists about the challenges and surprises of presenting a Baroque comedy 300 years later.

WFMT.com: What are the challenges of making this 1725 opera funny?

Schuller: I think the challenge is in knowing what’s just funny to us because we’ve been studying the score for so long and joking around in rehearsal versus what will actually be funny to the theater.

Ryan de Ryke: Plus we’re really good friends. We have our own inside jokes.

WFMT: What is not as challenging?

de Ryke: One of the amazing things about Telemann — he’s incredibly specific in terms of his musical timing. Some of the melodies are very uneven, so it’s not four-bar phrases like you might get in Mozart. You might ask, “Why are there two extra measures there?” It’s because the audience is going to be laughing.

WFMT: Are there moments where you say, “This joke has gone out of style”?

de Ryke: I think it’s even funnier now. We’re going through the #MeToo movement, and we have this crazy story about a woman’s empowerment: This lecherous old man is trying to be awful to this girl, and she has the last laugh. I think that’s a timeless story but more relevant now.

WFMT: So it lucked into modern resonance?

Schuller: Tropes may have changed over the years, but there’s a reason they still exist. Pimpinone and Vespetta are based on that commedia dell’arte tradition, but those tropes have evolved over the years. I think that’s why it’s still funny — even as modern people, we recognize these caricatures and find them hilarious for their outrageousness and their lack of depth.

WFMT: Are there jokes that just don’t land?

Schuller: With this kind of comedy, there is no fourth wall. We’re very aware of the audience; we’re not pretending they’re not there. It’s a little more forgiving in that sense, because if a joke isn’t working, you can look at the audience like, “Hello? You were supposed to laugh there!”

Schuller: My favorite part is throwing things at each other.

de Ryke: It really feels like a long episode of “I Love Lucy.”

WFMT: What are some of the inside jokes you mentioned, if you can reveal them?

de Ryke: We almost ended the show with a fart joke.

WFMT: Why didn’t you?

Schuller: Because [Haymarket artistic director] Craig [Trompeter] wrote program notes on the elegance of Baroque direction. He thought it would be too far afield with a whoopee cushion joke.

Haymarket Opera Company’s Pimpinone runs from March 30-April 2 at the Studebaker Theater in the Fine Arts Building. For ticketing and information, visit haymarketopera.org.

Editor’s note: this interview has been edited for clarity

The Rich Warren Connection
Playlist: 11 Lithuanian Composers You Should Know
Sing Different: Why the Life of Apple's Steve Jobs Makes for Great Opera
Handel in HD: Haymarket's Season Premieres with Streaming 'Acis and Galatea'
In the Age of the Visual Album, What Can Opera Learn from Beyoncé?
Music, Fable, and Batman: Why Beethoven's Story Makes for a Perfect Comic Book