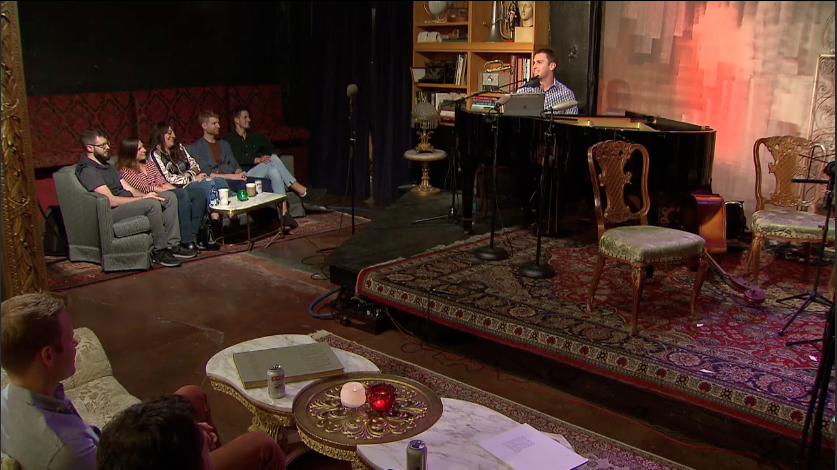 The WFMT Cabaret is a new series that brings together diverse artists for performance and broadcast before a live audience.

The first WFMT Cabaret, in fall 2016, was at the Uptown Underground, a burlesque longue in Chicago’s Uptown neighborhood. Composer, musician, and WFMT announcer Robbie Ellis hosted from the piano, and was joined by KAIA String Quartet, singer Bethany Thomas, and storyteller Jack Zimmerma.

In January 2017, actress and singer Hollis Resnik hosted an evening of music and spoken word around the theme “If on a winter’s night a traveler…” at Pregnant Buffalo Lounge, a subterranean space at the Chopin Theatre. The evening featuring performances by pianist Vassily Primakov, actress McKenzie Chinn, folk ensemble Foiled Again, and music director Doug Peck.

In April 2017, the event brought together two Chicago-based ensembles, the band Big Sadie and the Kontras Quartet. Robbie Ellis returned to share some comedic compositions of his own.

Watch highlights from WFMT's Classical Cabaret, a new series that brings together diverse artists for performance and broadcast before a live studio audience.

Chicago-based band Big Sadie performed at the third WFMT Cabaret hosted in the Pregnant Buffalo Lounge at the Chopin Theatre. Big Sadie is influenced by music from across America, with its core members Elise Bergman and Collin Moore hailing from the Midwest and Appalachia respectively. Rounding out the band’s current lineup are banjo player Andy Malloy and fiddler Matt Brown. Big Sadie ...

WFMT announcer Robbie Ellis has shared his talents as a comedian and composer as the host of WFMT’s Cabaret series. During the most recent WFMT Cabaret, Ellis revealed his favorite (albeit unconventional) place to pick up a date: the book club. His song, “Book Club,” suggests a few strategies for attracting and impressing a companion who is literarily inclined. Watch ...

Continuing its Cabaret series, WFMT brought together diverse artists in the Pregnant Buffalo Lounge, a subterranean space at the Chopin Theatre, on Monday, April 17, 2017. WFMT announcer Robbie Ellis hosted the performance and broadcast before a live audience that featured two Chicago-based ensembles, the band Big Sadie and the Kontras Quartet. The string quartet gets its name from the ...

The Pregnant Buffalo Lounge, a subterranean space at the Chopin Theatre was home to the second WFMT Cabaret.

On Monday, October 24, 2016 at Uptown Underground, WFMT presented its inaugural Cabaret before a live audience. A wide range of acts took the stage that night. WFMT announcer Robbie Ellis, who happens to be both a composer and a comedian, shared some of his original silly songs. KAIA String Quartet’s shared classical works that have folk roots. Singer Bethany ...
Tags
Cabaret
WFMT